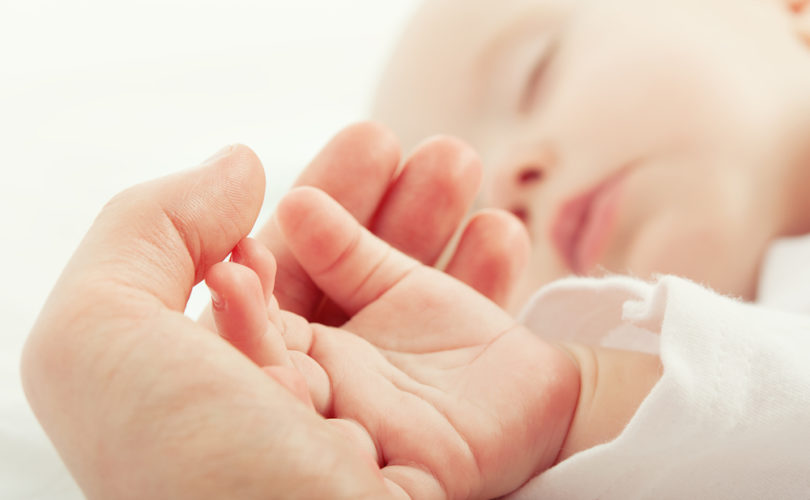 A British couple have just celebrated their healthy son’s second birthday after being pressured by doctors to abort him when they thought they saw potentially fatal birth defects during prenatal testing.

Robyn Wilson says her son Harry was born “absolutely perfect” on September 27, 2012, weighing 8 lbs., 5 oz.  But if Wilson had listened to her doctors early in her pregnancy, he wouldn’t be here today.

Wilson and her husband, Adam, were told at their 12-week ultrasound that the doctors saw markers for Trisomy 21, more commonly known as Down syndrome.  They tested Robyn’s blood and found abnormal levels of pregnancy hormones they said indicated a high risk of the baby being born with a chromosomal disorder such as Trisomy 21, Trisomy 18, or Trisomy 13.

“After being handed the results, we were told there was a very high chance our baby would die before birth,” Wilson told the U.K.’s Daily Mail. “We were told if he did live to birth, he might die shortly after, or that if he survived, he would be seriously ill or have health defects.”

After that, Wilson was referred to the maternity clinic at Jessop Hospital in Leeds.  The doctors there pressured her to abort.

“The hospital decided to book me in for an abortion to get rid of the baby – though they said it wasn't compulsory,” Wilson said.  “The option was there and they advised that it could be for the best, as they were fairly certain something was going to be wrong with the baby.”

“Adam and I were a complete mess.  It's really not what we wanted to happen,” Wilson continued. “We wanted to be telling people about the baby at this point – not finding ourselves unsure as to whether or not there would be a baby.”

“When we were advised to abort, everything was just rushing through my mind – I just kept thinking ‘What would be worse? Having an abortion, or having the baby in my arms for just a few minutes or days, maybe weeks?’” Wilson said.  “I thought I was never going to get that first hug, his first birthday party or that first day at school – let alone more. I thought it had all been taken away from me before it had even begun.”

Doctors scheduled Wilson for an abortion, but she decided to have one more test performed before going through with it.  The test, called “chorionic villus sampling” or CVS, can be risky for the baby because it involves puncturing the uterus with a needle to take a sample of the placenta.  In about 1 out of 100 cases, the procedure causes miscarriage.  But unlike ultrasound and maternal blood testing, the results of the test are definitive.

Three days before the scheduled abortion, the results came back – baby Harry was perfectly healthy, with no signs of chromosomal abnormalities.  Wilson’s doctors found this impossible to believe, so they ordered another round of ultrasound scans.  This time, there was no evidence of anything wrong.  Even so, hospital staff remained skeptical.

At Harry’s birth, Wilson told the Daily Mail, the doctors “rushed him off, as they were expecting to find something wrong with him, but he was completely fine.”

“The doctors and nurses couldn't believe it,” she said. “They all call him ‘the legend baby.’”

Still, she said, “I couldn't really enjoy the first few months of motherhood.  Every time a doctor could come around I would be thinking ‘This is it, this is it, someone is going to tell me what is wrong now,’ but still to this day, that hasn't come.”

Now, Wilson says of Harry – who just celebrated his second birthday – “He's my best friend. I wouldn't change a thing. He's so perfect.”

The value of early prenatal screening has been the subject of increasing scrutiny and debate in recent years.  The high rate of false positives leads many women to submit to riskier, more invasive tests that sometimes result in the loss of their babies, healthy or not. The pro-life movement has long criticized the practice because it is used primarily for eugenic purposes.

A 2008 report by Frank and Sue Buckley of Down Syndrome Education International estimated that between 400 and 600 perfectly healthy unborn babies are killed in the U.K. every year due to invasive diagnostic tests performed after an abnormal result during early screening.

“The vast majority of screen-positive results are false, yet encourage invasive diagnostic procedures that pose additional risks to unborn babies,” the Buckleys wrote.  “As a direct consequence many babies who do not have Down syndrome are lost. We estimate that current screening practice in England and Wales reduces annual live births of babies with Down syndrome by around 660 and leads to the losses of 400 babies without Down syndrome.”

Writing for the British Medical Journal, Dr. Des Spence, a Scottish physician, noted the dichotomy between the medical establishment’s treatment of parents and babies prenatally diagnosed with abnormalities, and its treatment of families who are surprised by unexpected issues like prematurity or birth trauma.

“In 2010 in the United Kingdom there were 1173 terminations for anomalies after 22 weeks’ gestation.  And because fetal viability occurs around this stage of gestation, feticide is conducted before delivery,” Spence wrote.  “These are extraordinarily painful decisions for couples to have to make.  By contrast, if a child without disabilities is born after 22 weeks, neonatal life support is offered or given automatically. This is despite prematurity being associated with high levels of physical and mental disability.”

“Pregnant women and couples are vulnerable, often entering into screening without giving much thought to the consequences,” Spence added. “And when an abnormality is detected, they get little time or specific direction on the decision to terminate. Meanwhile, for ‘normal’ children, life comes with no guarantees; the only certainty is a myriad of unpredictable and often devastating life events that await us all.”