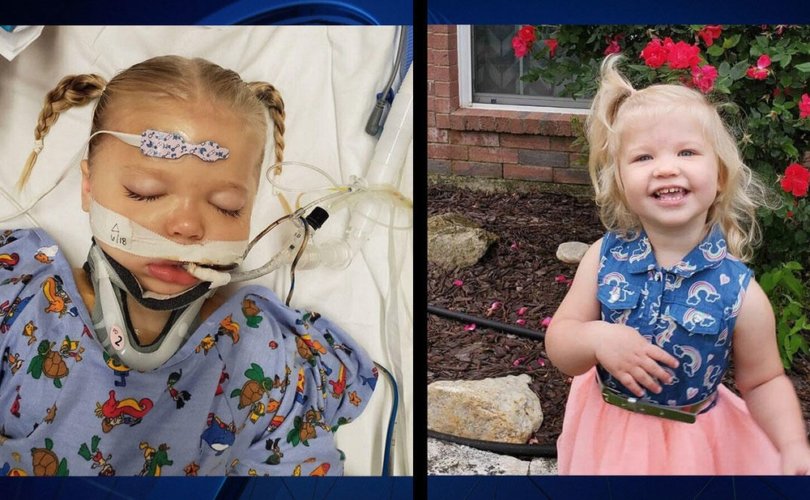 DALLAS, Texas, June 24, 2019 (LifeSiteNews) – Texas parents are begging a hospital to give their young daughter more time to see if she may recover before they remove her off life support after she was found unresponsive in the family’s pool a week and a half ago.

Blaire Bravenec was found in her family's pool June 12. Paramedics were able to get her pulse back. She was then flown to the ICU at Children's Health in Dallas.

The parents hope their daughter will recover with more time, but, they have had to contend with doctors who want to declare Blaire “brain dead” so that they can remove her from life support.

“This precious baby is beautiful, funny, super smart, & fighting for her life, breath by breath. Join us as we pray to our Heavenly Father, that he heal her little body!,” says a fundraising page for the girl’s medical costs created by a relative.

While doctors were able to restore the little girl’s heartbeat, she has remained unresponsive according to a report by local news station NBCDFW.com. News spread on social media on June 20 that the hospital was trying to remove Blaire’s life support system against the parents' wishes.

“The hospital is trying to forcibly remove her from life support right now against her parent’s wishes. They have given them 24-hours,” wrote New Wave Feminists about the tragic situation on their Facebook page on Thursday.

If Blaire’s doctors at Children’s Health in Dallas declare her “brain dead,” she will no longer be provided medical treatment. Current Texas law prevents Blaire’s parents from interceding on her behalf for more time to recover.

“The hospital's really just kind of bound by legality here. Well this is how the law says and this is what we're supposed to do because they want the best for our daughter. It's why they've given her such tremendous care,” said Blaire's Dad, Darren Bravenec, in a KRLD interview.  “It's just that the way Texas laws are written.”

Texas Right to Life has stepped in and has negotiated with the hospital for an undisclosed length of additional time for Blaire.

“Ultimately the law needs to be changed to put some of the decision making power back into the hands of the family because they know what the best interest of their loved one is going to be,” explained Emily Horne, senior legislative associate with Texas Right to Life, in an NBCDFW.com interview.

LifeSiteNews will continue to follow this story as it develops.