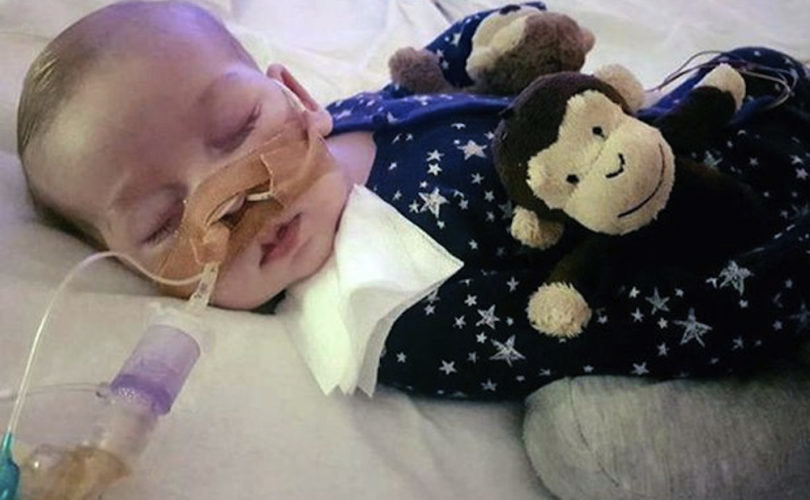 LONDON, England, July 8, 2017 (LifeSiteNews) – The hospital fighting to remove 11-month-old Charlie Gard from life support blocked a Presbyterian minister invited by Charlie's parents from praying at his bedside, and then reversed course and let him in.

Rev. Patrick Mahoney, pastor of Church on the Hill and Director of the Christian Defense Coalition in Washington, D.C., is one of several international human rights activists who flew to England to help Chris Gard and Connie Yates in their ongoing struggle to treat their son.

They've been fighting in European courts for their right to bring Charlie to the U.S. for experimental treatment for his rare mitochondrial disease. They raised over $1 million to do this, but English courts sided with the hospital, Great Ormond Street Hospital, which wants to remove him from life support rather than allow him to be transferred to another hospital.

On Friday, July 7, Great Ormond Street Hospital asked the High Court to re-hear “fresh evidence” about possible alternative treatment for Charlie. The hospital says it hasn't changed its position, but thinks the court should hear the new information, which Mahoney told LifeSiteNews is “very compelling for Charlie.” It seemed to be a positive sign for Charlie as it means he gets another chance.

Connie Yates said initially she was “heartbroken” that Mahoney was blocked from being allowed to pray with Charlie, as she and her husband wanted.

“Thankfully,” after a “long process,” the hospital “did recant and allow me to go pray for him,” Mahoney told LifeSiteNews in an exclusive interview at 1:42 p.m. EST.

“I can’t even put it into words, it was so moving,” Mahoney said of praying with the baby whose parental rights and bioethics case has garnered international attention. “Connie, his mother, was feeding him. Chris was there. We laid hands on him and prayed together. He has beautiful stuffed animals all around him. And it was just a touching, beautiful moment.”

Mahoney noted that initially being denied access to pray with Charlie was troubling and emotionally stressful for Chris and Connie. He said in a news release before being granted permission that never once in 40 years of pastoral ministry had a hospital refused to let him pray with a patient.

“First they said they would have to check” if Mahoney could pray with Charlie, he told LifeSiteNews. “Then they said we couldn’t go. Then they gave [us] permission and then when we were going with his mother into the room, they denied us. And then we sent the news release out” and then finally received permission.

“Only this precious life could touch a president, a pope, people of diverse backgrounds,” said Mahoney. Praying for Charlie at his bedside “was very moving.”

At 2:00 p.m. London time on Sunday, July 9, there was a rally for Charlie outside the hospital. Those rallying delivered a pro-Charlie petition of over 350,000 signatures to the hospital. On Monday, there will be a short court hearing, also at 2:00 p.m. The case's major day in court will be Thursday.

Pope Francis, President Trump, and many other diverse, prominent figures have thrown their support behind Charlie and his parents' right to make medical decisions about their child's fate.

Charlie Gard’s mom: Our baby is ‘not in pain and suffering’

Charlie Gard will get another chance in court, remains on life support

Parents of kids with same disease as Charlie Gard: We’re ‘beyond shocked’