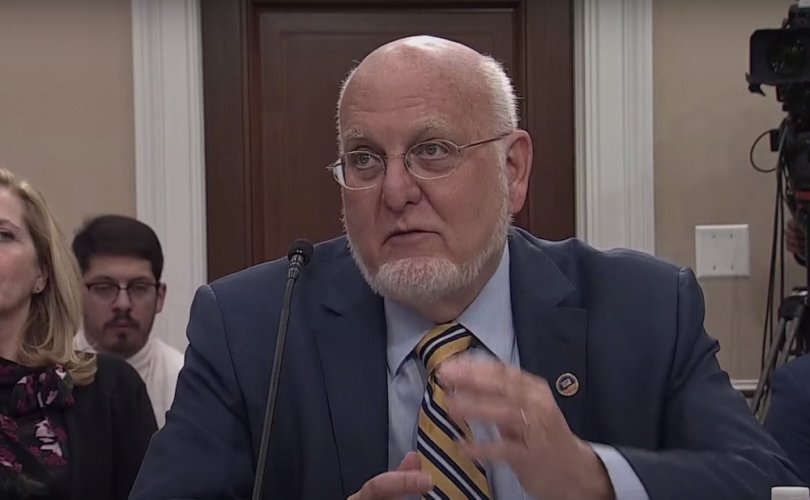 WASHINGTON, D.C., August 4, 2020 (LifeSiteNews) — There is a financial incentive for hospitals to inflate their counts of deaths due to COVID-19, U.S. Centers for Disease Control & Prevention (CDC) director Dr. Robert Redfield acknowledged Friday in congressional testimony.

“I think you’re correct in that we’ve seen this in other disease processes, too, really in the HIV epidemic, somebody may have a heart attack, but also have HIV — the hospital would prefer the [classification] for HIV because there’s greater reimbursement,” Redfield told the House Oversight and Reform Select Subcommittee on the Coronavirus Crisis.

Redfield maintained that “probably it is less operable in the cause of death” and assured lawmakers that “we review all of those death certificates” but admitted, “When it comes to hospital reimbursement issues or individuals that get discharged, there could be some play in that for sure.”

The federal CARES Act, the $2-trillion emergency relief package Congress passed in March, increases per-patient Medicaid reimbursements to hospitals by 20% for patients listed with a “principal or secondary diagnosis of COVID-19.”

As of August 4, the United States is estimated to have seen more than 4.9 million cases of COVID-19, with more than 160,000 deaths and 2.4 million recoveries. For months, however, debate has raged over the accuracy of those numbers.

In April, the New York City Health Department invited such concerns by adding more than 3,700 to its official death count, single-handedly raising the national COVID-19 death toll by 17 percent, despite that number coming from the addition of people “presumed” to have had the virus but not having been tested for it.

In the months that followed, similar incidents sparked further distrust of the official numbers, such as Colorado lowering its death count after admitting that it had counted people who had tested positive but died from other factors; Texas removing more than 3,000 cases from its positivity count upon learning that the San Antonio Health Department was classifying “probable cases” as “confirmed” positives despite never having tested them; and revelations of “countless” Florida testing labs reporting implausible positivity rates of 100 percent, as well as various other labs reporting other suspiciously high rates, which led health officials to admit that some private labs had not reported any of their negative findings to the state.

Last month, concerns over a potentially misleading lag in the CDC’s publishing of coronavirus statistics led the Trump administration to begin requiring hospitals to send COVID-19 data directly to the Department of Health & Human Services (HHS) instead of the CDC’s National Healthcare Safety Network.

In May, the Washington Post quoted Dr. Deborah Birx, response coordinator for the White House Coronavirus Task Force, privately admitting that “there is nothing from the CDC that I can trust.” Birx reportedly suspected that deaths might be inflated by as much as 25 percent, given the problem of hospitals and health agencies classifying “COVID-19 deaths” as anyone who died after testing positive for the virus, even if the virus was not the actual cause of death.

Whatever the truth, public perception of the danger posed by the coronavirus has carried intense real-world consequences. Instead of targeted policies to secure vulnerable populations, most states responded to the outbreak by imposing strict limits on “non-essential” activity, including delays of non-urgent medical procedures. As a result, hundreds of thousands of jobs have been lost, with more than 33 million Americans filing for unemployment and studies predicting that tens of thousands of small businesses will never reopen.

The mental and emotional toll of prolonged social isolation has also been a significant concern, with Redfield warning last month that “we’re seeing, sadly, far greater suicides” and “deaths from drug overdose that are above excess” than COVID-19 deaths.