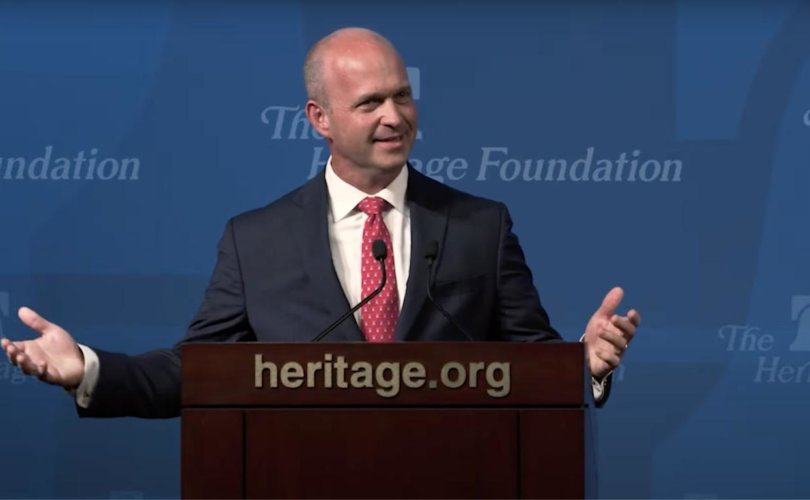 WASHINGTON (LifeSiteNews) — The nation’s leading conservative think tank, The Heritage Foundation, has reached far outside the beltway for its new leader, Kevin Roberts, described as a Texas “Cowboy Catholic” who wants to “take back this country.”

Quickly defining himself as a foe of the D.C. swamp, Roberts said in his first interview after accepting his new position at Heritage that his selection means that conservatism in the next decade and century will “not only be less DC-centric, it will be one that gets back to its roots of being hostile, hostile, hostile to the centralization of power in the national capitol.”

To that end, Roberts predicts that the country is “about to enter the golden-era of federalism,” where states have more power to act independently of Washington, returning to what was once their prized roles as ‘laboratories of democracy.’

“Coming from a state as free and prosperous as Texas, I’m eager to share the innovative ideas we developed and build on them,” said Roberts.

“Conservatives have made great strides this year to enact state reforms that strengthen the integrity of our elections. I’m proud of the reforms we made in Texas and I’m glad so many other state policymakers have prioritized election integrity,” said Roberts in a statement to RealClearPolitics’ Phil Wegman. Roberts also warned that conservatives “need to resist efforts in Washington, D.C., to federalize our elections and render the state reforms meaningless.”

“I am here to lead you to take back this country,” Roberts told an assembly of Heritage Foundation staff yesterday, shortly after taking the helm at the organization’s Capitol Hill headquarters.

“There is no other institution that has the ability, uniquely, to remind the current regime — and I use that word purposefully [because] they are authoritarians — to get back in their box and stay there,” he exclaimed.

Pushing back on the radical socialist agenda advanced by the left

Among the one hundred or so candidates considered by Heritage for its new president were former White House Chief of Staff Mick Mulvaney, former Vice President Mike Pence, and former secretary of labor, Eugene Scalia.  However, the organization saw the clear need to bring in an “outsider” from the heartland, rather than a Washington “insider.”

“Since last spring, Heritage’s Board of Trustees has been searching for a leader who demonstrates an unwavering commitment to Heritage’s mission and the conservative principles that guide our research,” explained Barb Van Andel-Gaby, chairman of Heritage’s Board of Trustees in a press release. “After looking at candidates from across the country and throughout the conservative movement, one person truly stood out: Heritage’s trustees have unanimously elected Dr. Kevin Roberts as our next president.

“While there were many outstanding candidates we interviewed during the search process, Kevin was the best choice to lead The Heritage Foundation at this pivotal time in our nation’s history,” continued Van Andel-Gaby. “Kevin has an entrepreneurial spirit and a deep enthusiasm for conservative solutions, and he will bring with him a different perspective as a D.C. outsider.”

Until now, Roberts has served as the chief executive officer of the Texas Public Policy Foundation (TPPF) in Austin, Texas.

“As president of The Heritage Foundation, Roberts will continue to lead policy research efforts on many of the issues he championed at TPPF, including education, health care, border security, election integrity, and more, and his leadership will also be critical in pushing back on the radical, socialist agenda being advanced by the left at all levels of government,” continued the Heritage statement.  “At a time when so many bad ideas are coming out of Washington, his experience advancing sound policy at the state and national levels will be vital.”

Rep. Chip Roy (R-TX) welcomed Robert’s installment as the new Heritage Foundation head, saying in a tweet that “it is a very good thing for the future of freedom, the advancement of civil society, and the prosperity of the American people.”

“The time is now for conservatives and conservative organizations to lay down clear terms & then hold to those terms,” said Roy. “We have much to do, & the clock is ticking.”

THREAD: It is a very good thing for the future of freedom, the advancement of civil society, & the prosperity of the American people that my dear friend & former @TPPF colleague, @KevinRobertsTX, was today voted to be the next President of @Heritage. The time is now… (1/3) https://t.co/MeVlIuLz0o

After teaching history at the college level for several years, Roberts in 2006 founded John Paul the Great Academy, a co-ed, K-12 Catholic liberal arts school in Lafayette, Louisiana, serving as the academy’s president and headmaster for seven years.

In 2013, Roberts became president of Wyoming Catholic College, adopting a policy of refusing to accept federal student loans and grants, lest it be forced to violate Catholic tenets. His stance led The New York Times to describe the school as being full of “cowboy Catholics.”

“I recently spent time at John Paul the Great Academy in Lafayette, which [Roberts] helped found, and it is amazing,” tweeted National Review author and Catholic commentator Kathryn Jean Lopez. “If he can bring to Heritage some of the grace I saw there, this is excellent news.”

all I can say about is that I recently spent time at John Paul the Great Academy in Lafayette, which he helped found, and it is amazing. If he can bring to @Heritage some of the grace I saw there, this is excellent news https://t.co/4DvyA9OjqL

“Congratulations to Dr. Kevin Roberts on being named the 7th President of the Heritage Foundation!” said Trump Vice President Mike Pence. “As CEO of TPPF, Kevin’s strong commitment to Conservative solutions will ensure Heritage remains the Flagship of the Conservative Movement across America!”

Congratulations to Dr. @KevinRobertsTX on being named the 7th President of the @Heritage Foundation! As CEO of @TPPF, Kevin’s strong commitment to Conservative solutions will ensure Heritage remains the Flagship of the Conservative Movement across America! 🇺🇸 pic.twitter.com/3kKZVsucYN

Texas Governor Greg Abbott said that Robert’s new job at Heritage is a “Big loss for TPPF and the Lone Star State, but glad you’ll be advancing our Texas values in DC.”

Huge congratulations to my friend, @KevinRobertsTX, on being named president of the Heritage Foundation.

Big loss for @TPPF & the Lone Star State, but glad you’ll be advancing our Texas values in DC. https://t.co/qPIP0s4OIG