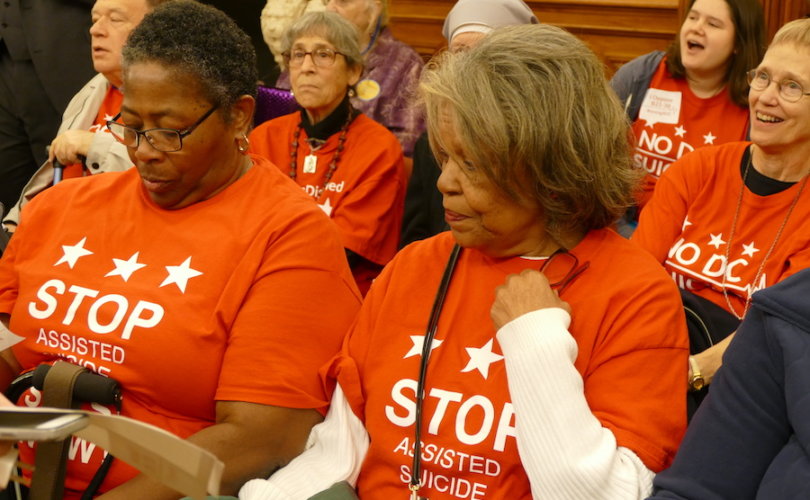 WASHINGTON, D.C., February 14, 2017 (LifeSiteNews) – The House Oversight Committee voted 22-14 on Monday to disapprove of the District of Columbia's assisted suicide law, sending it to the full House for a vote.

Democrats on the House Oversight Committee used Monday's bill mark-up to complain about the Home Rule Act of 1973, which gives Congress power to overturn D.C. laws. They also suggested morality is relative and that the Republican-controlled Congress is trying to bully the District.

Chairman Rep. Jason Chaffetz, R-UT, noted in his opening remarks the inaccuracy of many medical prognoses, that the Act “doesn't even properly define terminal illness,” and someone who would financially benefit from a person's death may be a witness that the patient is not being coerced.

The law places “individuals in a position ripe for abuse and mistake,” said Chaffetz. “One of the other people who is concerned about this is the mayor's Director of the Department of Health, Dr. LaQuandra Nesbitt. Dr. Nesbitt expressed deep reservations about legalizing assisted suicide in the District.”

These range, Chaffetz explained, from the American Medical Association's opposition to assisted suicide “to the potential for abuse and mistakes when carrying out assisted suicide.”

Opponents of the bill say it unfairly targets minorities, the elderly, and the disabled – and that it incentivizes insurance companies to provide cheap deadly drugs instead of life-saving treatment.

“The District's Act does not even make clear what can be considered a terminal disease,” said Chaffetz. “The singular requirement is a reasonable medical judgment that will result in death within six months. Does this mean that you'll probably die if you outlive your life expectancy? For a male, it's 76 years old; for a female, it's 81 years old. Statistically, you're predicted to die within six months of that.”

Another problem with the Act is it “seems to be a photocopy of what was done in the state of Washington,” said Chaffetz, because it doesn't properly define what a Class A felony is. This means that there is no penalty for assisted suicide if it “falls outside the bounds” of the new law.

“The legalization of assisted suicide in the nation's capital stands in stark contrast to the federal government's effort to prevent suicide,” said Chaffetz. “The federal government has been deeply involved in suicide prevention. In fiscal year 2015, the Department of Health and Human Services budget included $55 million for suicide prevention efforts. I'm sure those on this panel who want to have assisted suicide will fight to have that stripped from the budget. The National Institutes of Health has spent more than $250 million since 2012 studying suicide and how to prevent it. And again, I'm sure that those who believe in assisted suicide will fight that funding as well – at least, they should, if they're gonna be consistent.”

Melissa Ortiz, the founder and principal of Able Americans, said she was pleased the committee “stood for life.”

“My heart is full as a result of the OGR Committee's decision to block the DC Physician Assisted Suicide Law,” she told LifeSiteNews. “Pain management has advanced to the point that a person does not have to suffer needlessly when chronically or terminally ill. It is also reprehensible to me that insurance companies in places where physician-assisted suicide is legal are now offering to pay for the lethal dosages, especially if they are cheaper than curative treatment. This action on the part of the OGR Committee will begin the move to put an end to that, thankfully.”

Ortiz said yesterday's vote “reasserted the idea that all life has meaning and that there is purpose in suffering.”

“Rights. Compassion. Dignity. Death. Platonic words masking the issue. The bold reality? Only a twisted set of ethics can claim to dignify life while terminating it. French existentialist Jean-Paul Sartre declared that an act against oneself can never be for oneself. No act that extinguishes a life dignifies that life. Rather, it destorys it. Confusing the conscience does not change what is ethical. As an example, listen to what these well-meaning physicians say on the issue of mercy-killing, rejecting Hippocrates in testimony to the government: 'The underlying motive was the desire to help individuals who could not help themselves and were thus prolonging their lives in torment. To quote Hippocrates today is to claim that invalids and persons in great pain should never be given poison. But any modern doctor who makes so rhetorical a declaration without qualification is a liar or a hypocrite. I never intended anything more or believed I was doing anything more but abbreviating the tortured existence of such unhappy creatures.'

To the shock of the small community of people and physicians paying attention, [the] two doctors were lawfully allowed to expand their program: 'These doctors are responsibly commissioned to extend the authority of physicians to be designated by name so that a mercy death may be granted to patients who, according to human judgment, are incurably ill according to the most critical evaluation of the state of their disease.' Signed, Adolf Hitler, October 1939.”

Russell called the committee's attention to the Netherlands, where children as young as 12 may kill themselves with parental consent, and where newborns may be euthanized. Proponents of assisted suicide in that country said it would never go that far, but it has, said Russell.

“Each twisted logical layer adds a new callus to the conscience. If it only stopped there … this is modern Europe. NATO allies. Western culture,” said Russell. “America, wake up. Wake up! No matter how frayed the fabric of our conscience, we must hold it together to stand against this civilized, organized effort of barbarity veneered as consent, dignity, and duly passed law. How are we any different than the Belgians of 2014? The Dutch of 2002? The Germans of 1939? I will speak up. We must wake up. We cannot allow the legalization of a system of expanding murder-suicide pacts.”

Russell ended his passionate speech by quoting Proverbs 24: “Rescue those being led away to death; hold back those staggering toward slaughter. If you say, 'But we knew nothing about this,' does not he who weighs the heart perceive it? Does not he who guards your life know it? Will he not repay each person for what he has done?”

“D.C. is America's city. It represents the entire country, not just its residents,” he concluded.

Rep. Darrell Issa, R-CA, voted against the resolution while touting his commitment to the pro-life cause. Rep. Jim Cooper, D-TN, voted for the resolution.

Jessica Grennan, national director of political affairs and advocacy of the assisted suicide advocacy group Compassion & Choices, called the ongoing Congressional showdown “one of the gravest challenges our movement has faced.”