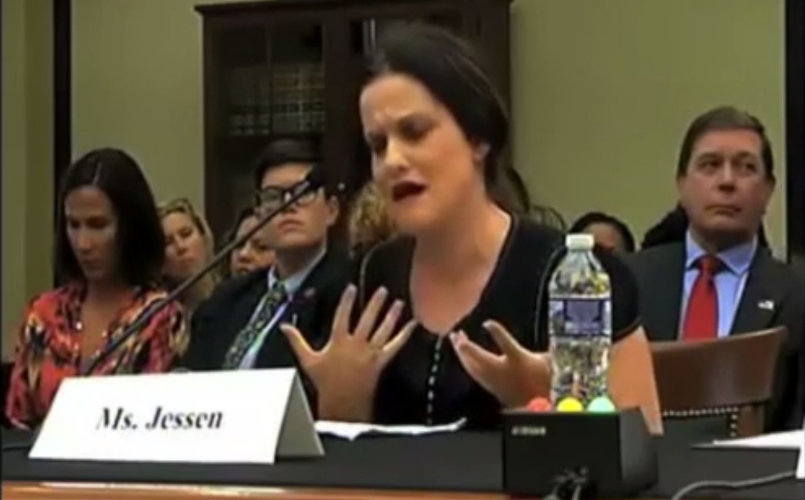 September 30, 2016 (DailySignal) — An abortion survivor urged Americans to “wake up” to the reality that some babies born alive after an attempted abortion are left to die, the survivor testified at a hearing on Capitol Hill last week.

“Many Americans have no idea that babies can even live through abortions and are often left to die, but this does happen,” Gianna Jessen, 39, said at the hearing. “I know this, because I was born alive in an abortion clinic after being burned in my mother’s womb for 18 hours.”

Jessen, who has cerebral palsy due to her attempted abortion, added at a House Judiciary Constitution and Civil Justice Subcommittee hearing on Sept. 23:

My medical records clearly state the following: Born during saline abortion … Apart from Jesus himself, the only reason I am alive is the fact that the abortionist had not yet arrived at work that morning. Had he been there, he would have ended my life by strangulation, suffocation, or simply leaving me there to die.

“Often when I’m in the midst of abortion advocates, they never can answer this one question and it is this: If abortion is merely about women’s rights, then what were mine?” Jessen said.

“Apart from Jesus, the reason I am alive is the fact that the abortionist had not yet arrived at work.” —@giannajessen

“Unfortunately, incidents involving born-alive children being killed after an attempted abortion have continued after this law [was passed] and into the present,” Arina Grossu, director for the Center of Human Dignity at the Family Research Council, testified at the hearing. Grossu’s written testimony says:

Abortionist Kermit Gosnell operated his dirty and dangerous Philadelphia abortion business and committed horrendous crimes in Philadelphia for over three decades. … His heinous and murderous practices of snipping the spines of born-alive children were only discovered by accident when federal and state authorities raided his facility in 2010, not because he was illegally killing born-alive infants, but because of his illegal prescription drug activity.

Grossu says Gosnell is “not an outlier.”

“Not one person to date has been charged or convicted under the current federal [Born-Alive Infants Protection Act] law,” Grossu testified.

The House passed the Born-Alive Abortion Survivors Protection Act, introduced by Rep. Trent Franks, R-Ariz., in September 2015. An identical bill in the Senate, introduced by Sen. Ben Sasse, R-Neb., was referred to the Judiciary Committee.

The legislation “explicitly requires health care practitioners to treat born-alive abortion survivors with the same care they would treat any other born-alive baby and admit such babies immediately to a hospital.” The law would also hold abortionists accountable for killing born-alive infants, Grossu testified.

President Barack Obama’s administration “strongly opposes” the passage of this bill, according to a statement from September 2015.

“The White House has promised that it would veto the born-alive legislation, citing it would have a ‘chilling’ effect,” Grossu testified. “I cannot think of a more chilling effect than continuing to let U.S. abortionists commit infanticide.”

Grossu urged support for the legislation to stop infanticide, or intentionally killing an infant child, in the United States.

The Hyde Amendment, also under examination at the hearing, prohibits the use of certain taxpayer dollars in abortion cases, except in rape, incest, or to save the mother’s life.

“Today we will hear testimony on existing statutory language prohibiting taxpayer funding from paying for the taking of the lives of preborn children through abortion,” Franks said. “There is concern that the Obama administration or a potential Clinton administration may intend to reinterpret the plain and longstanding meaning of the Hyde Amendment.”

The Hyde Amendment, an appropriations policy rider that has been passed each year since 1976, has its 40th anniversary this week.

“As a black woman, I am outraged that the morally bankrupt Hyde Amendment has been permitted to persist for so long,” Kierra Johnson, executive director of Unite for Reproductive & Gender Equity, testified. “It is a source of pain for many women and should be a source of shame for those who support it.”

“The Hyde Amendment prevents women from even being able to make a decision about their health care,” Johnson said.

While Genevieve Plaster, a senior policy analyst at the Charlotte Lozier Institute, a pro-life nonprofit organization, testified that the Hyde Amendment has saved over 2 million lives since 1976, or approximately 60,000 lives per year.