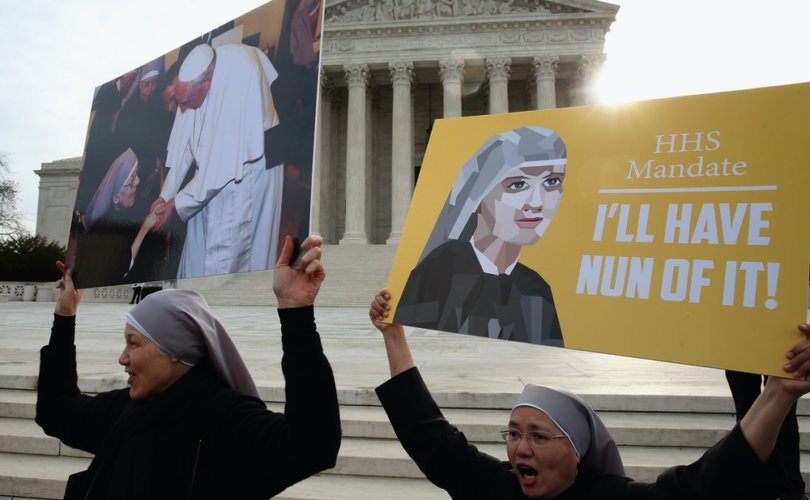 WASHINGTON, D.C., July 31, 2020 (LifeSiteNews) – Democrats in the U.S. House of Representatives have introduced legislation to repeal a longstanding restriction on overseas abortion funding, and plan to vote on a spending bill that would open the door to further pro-abortion spending, including targeting the Little Sisters of the Poor once more.

Democrat Rep. Jan Schakowsky of Illinois has introduced the Abortion is Health Care Everywhere Act, which would repeal the 1974 Helms Amendment, to “uplift women around the world,” in Schakowsky’s words. The amendment states that “No foreign assistance funds may be used to pay for the performance of abortion as a method of family planning or to motivate or coerce any person to practice abortions.”

In promoting her bill, Schakowsky claimed the Helms Amendment was “deeply rooted in racism,” whereas repealing it would “uplift women around the world,” Breitbart reports. In response, Students for Life of America president Kristan Hawkins blasted the pitch for the bill as “tone-deaf,” especially in light of the fact that (per the pro-abortion Guttmacher Institute) the “abortion rate for black women is almost five times that for white women.”

“That is not the kind of reality U.S. taxpayers want to export to other countries,” Hawkins said.

At the same time, the House is slated to take up New York Democrat Rep. Nita Lowey’s HR 7617, a spending bill for several government departments that attacks current restrictions on abortion funding from multiple angles.

The bill would allow the District of Columbia to pay for abortions with taxpayer dollars; gut the Trump administration’s Protect Life Rule, which bars abortionists from receiving Title X funds; undo administrative rules protecting the right not to participate in or subsidize abortion; deny Teen Pregnancy Prevention funds to programs that teach abstinence; and cut funding for “sexual risk avoidance” education, which is defined as “voluntarily refraining from non-marital sexual activities.”

Further, a manager’s amendment introduced by Lowey would reverse the Trump administration’s move to protect religious entities such as the Little Sisters of the Poor from being forced to fund contraceptives under the Affordable Care Act (Obamacare). The U.S. Supreme Court recently ruled that the administration had the right to issue the exemption, but did not strike down the Obama-era mandate itself.

On the other side of the aisle, Republican Congressman Roger Marshall of Kansas has introduced the Abortion Provider Loan Elimination Act, which would ensure that no more COVID-19 relief money goes to the abortion industry and open an investigation into how Planned Parenthood received more than $80 million from the Paycheck Protection Program.

“As an OB/GYN who’s delivered over 5,000 babies, I am proud to stand alongside the pro-life community in introducing this bill which will ensure abortion providers cannot take advantage of our hard earned tax dollars during a pandemic, and investigate how they were able to do so in the first place,” Marshall said.

None of the aforementioned bills are expected to make it through the current divided Congress, though they serve as examples of the types of legislation that could become possible depending on the outcome of November’s presidential and congressional elections.