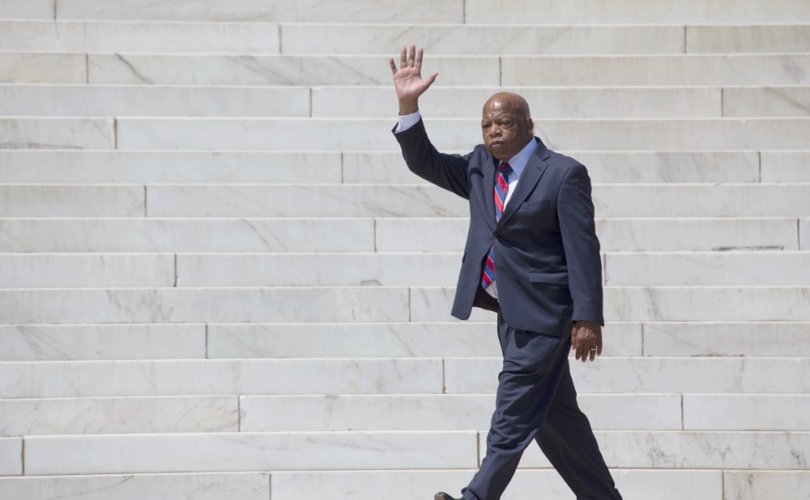 Rep. John Lewis of Georgia, chairman of the Oversight Subcommittee of the House Ways and Means Committee.Joseph Sohm / Shutterstock.com

WASHINGTON, D.C. September 20, 2019 (LifeSiteNews) — House Democrats are calling for 60 alleged “hate” groups, that include mostly socially conservative and some religious-based groups, to be stripped of their 501(c)(3) tax-exempt status for opposing, among other things, homosexuality, and LGBT ideology in general.

On Thursday, the Oversight Subcommittee of the House Ways and Means Committee held a hearing on “How the Tax Code Subsidizes Hate,” in which Democrats sought to link accredited 501(c)(3) nonprofits to “hate” speech and violence. Democrats at the hearing expressed concern that the federal government is in effect subsidizing groups with which it is at odds. No legislation was proposed, however.

The Ways and Means Committee has targeted pro-family groups like The American Family Association for its medically backed warning about the dangers of the homosexual lifestyle.

“Some of these organizations promote hate based on race, gender, religion, sexual orientation, or ethnicity. Their actions taint the good work of all tax-exempt organizations. Hate is not consistent with the goodwill of our nation and its people,” he said.

Claiming that “hate is on the rise,” Lewis asserted, “I believe that the federal government should not sponsor or support groups whose hatred seeks to divide us. Any tax-exempt organization that promotes hate and sows the seeds of violence is one too many.”

Some other organizations featured on a target list are the Family Research Council, the Center for Security Policy, and the Federation of Americans for Immigration Reform. These are just a few of the more than 60 groups that the leftist Southern Poverty Law Center has designated as “hate groups.” According to the controversial SPLC, it tracked more than 1,000 so-called hate groups in 2018.

Among other groups targeted by Democrats are the pro-life American College of Pediatricians, the Catholic IHS Press, the pro-marriage Ruth Institute, and the conservative David Horowitz Freedom Center, along with the Federation of Americans for Immigration Reform.

In an email response to LifeSiteNews, a spokesperson for the American Family Association said the hearing saying that it is “built on lies.”

“It is no secret that a fantasy of the political Left is to shut down any and every organization that disagrees with its agenda to destroy our great country. AFA will fight back against these attacks, and we will continue promoting Christian activism as we have done for the past 40 years.”

Today the Ways and Means Committee conducted a hearing on How the Tax Code Subsidizes Hate. “It is important for us to consider how our policies can help reduce hate and violence through any vehicle – any mechanism, any apparatus, any way that we possibly can” pic.twitter.com/MUKpUpAzij

Dr. Michelle Cretella of the pro-life American College of Pediatricians responded to LifeSiteNews via email, refuting the “hate group” label applied by the SPLC.

Cretella wrote that her group “has never maligned anyone nor has it ever engaged in attacks against a group of people.”

“Our mission is simply to seek the ‘best for children’…even when it is no longer popular or ‘politically correct,’” she said.

Cretella declared that the ACP has “scientifically dispelled” the myth of “innate and immutable non-heterosexual attractions, behaviors and identities,” adding that this “scientific position” triggered the SPLC’s labeling. She theorized that the SPLC is motivated by an  “anti-Judeo-Christian animus and has altered its definition of hate to appeal to an increasing number of activist groups who share their specific ideology.” She added that the SPLC has demonstrated hatred and has defamed groups with whom they disagree. Dr. Cretella said, “In its unwavering pursuit to punish citizens who hold a different worldview the SPLC has spawned an ethos of intolerance that eliminates the possibility of any civil dialogue among those of differing viewpoints.”

In testimony before the subcommittee, UCLA law professor Eugene Volokh cautioned the members about the constitutional issues raised by calls to target nonprofit organization because of their views. In his testimony, Volokh wrote: “The Tax Code indeed subsidizes hate, just as it subsidizes Socialism, Satanism, and a wide variety of dangerous and offensive ideas. Under the First Amendment, tax exemptions have to be distributed without discrimination based on viewpoint; that means that evil views have to be treated the same way as good views.” He went on to say that the Supreme Court has “repeatedly made clear that tax exemptions can’t be denied based on the viewpoint that a group communicates.”

(4/5): The American Family Association, which has claimed: pic.twitter.com/cFxzQN7zR3

(5/5): These remarks are vile and only work to perpetuate hate crimes and stir division. There is no reason the U.S. government should continue to subsidize groups like these – Ways & Means Dems are shining a light on this issue today.

Volokh cited Speiser v. Randall, which struck down a denial of a property tax exemption to people and organizations that “advocate[] the overthrow of the Government of the United States[.]” Volokh quoted the majority opinion in the 1958 case, which said: “[A] discriminatory denial of a tax exemption for engaging in speech is a limitation on free speech. It is settled that speech can be effectively limited by the exercise of the taxing power. To deny an exemption to claimants who engage in certain forms of speech is in effect to penalize them for such speech. Its deterrent effect is the same as if the State were to fine them for this speech.”

Volokh wrote, “Groups may be denied tax exemptions for deliberately engaging in speech that falls within one of the few narrow exceptions to the First Amendment, such as true threats of criminal attack, or incitement intended to and likely to cause imminent criminal conduct. But ‘hate speech’ writ large doesn't fall within any such exceptions[.]”

CEO of @ywcaelpaso Dr. Sylvia Acosta testified before the House Ways and Means Subcommittee on Oversight today about hate groups and the role of hate speech in last month’s El Paso shooting. Thank you, Dr. Acosta, for lending your expertise to this important issue! pic.twitter.com/g7YLyWL80C

The leftist Southern Poverty Law Center (SPLC) is a multi-million-dollar nonprofit itself that has a long record of labeling Christian and conservative organizations as hate groups that it believes merit censure and blacklisting on social media platforms and services. It has induced MasterCard and GoFundMe to deny services to conservatives. However, over the past year, it has paid $3.4 million in defamation damages to Maajid Nawaz’s Quilliam Foundation. In addition, it ousted co-founder Morris Dees for “inappropriate conduct” with female staff. Dees, according to an insider, viewed the SPLC as a “highly profitable scam” and viewed “civil-rights work mainly as a marketing tool for bilking gullible Northern liberals.”

In an email response to LifeSiteNews, Dan Stein, president of the Federation of Americans for Immigration Reform, referred to the SPLC as an “unaccountable, discredited, and scandal-ridden” group.

Suggesting that Democrats are giving the SPLC the right to decide who can be tax-exempt, Stein wrote: “If this naked effort to silence political and social views held by a substantial number of Americans — in many cases, the majority of Americans — were not such a terrifying assault on the First Amendment, it would be laughable.” Stein opined that the Ways and Means Committee has “essentially designated” the leftist group as “the arbiter of whose voices should be heard in debates about critical public policy issues.” He added, “Forget ‘Democratic Socialism.’ We’re headed full-speed toward Stalinism, if the Democratic leadership gets its way.”