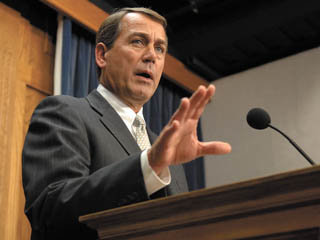 'When an organization monetizes an unborn child – and with the cavalier attitude portrayed in this horrific video – we must all act,' says House Speaker John Boehner.

The site, which is one of several related to House investigations, such as the one they are doing into the IRS scandal that targeted Tea Party, pro-life, and pro-family groups, includes a timeline of what House committees have done to find information on Planned Parenthood's fetal harvesting practices.

While only the House Judiciary Committee has held a hearing on Planned Parenthood's practices, other committees are expected to do so as their investigations continue. The Oversight & Government Reform Committee has focused on money Planned Parenthood receives from the federal government, as well as video and information from the Center for Medical Progress and fetal procurement company StemExpress.

Boehner: “When an organization monetizes an unborn child – and with the cavalier attitude portrayed in this horrific video – we must all act.”

The Energy & Commerce Committee has conducted briefings and interviews with StemExpress officials, senior Planned Parenthood officials, and other organizations and individuals. Health & Human Services Secretary Sylvia Burwell was grilled about actions her agency planned to take by members of the Education & Workforce Committee.

“As soon as the first video was released in July, the House launched a thorough and aggressive look into Planned Parenthood’s practices that continues today,” House Republican Conference Chair Cathy McMorris Rodgers, R0-WA said in a statement. “The practices described in these videos are despicable, and we will do everything within our power to hold the President and Planned Parenthood accountable to their content.”

House Speaker John Boehner, R-OH, said that “nothing is more precious than life, especially an unborn child.  When anyone diminishes an unborn child, we are all hurt, irreversibly so.  When an organization monetizes an unborn child – and with the cavalier attitude portrayed in this horrific video – we must all act.”

House leaders have been under pressure to defund Planned Parenthood in a budget vote expected this month. Such a measure would buttress the investigations, say conservative voices in the chamber — but it would also set up a fight with Democrats that could end up with a partial government shutdown.