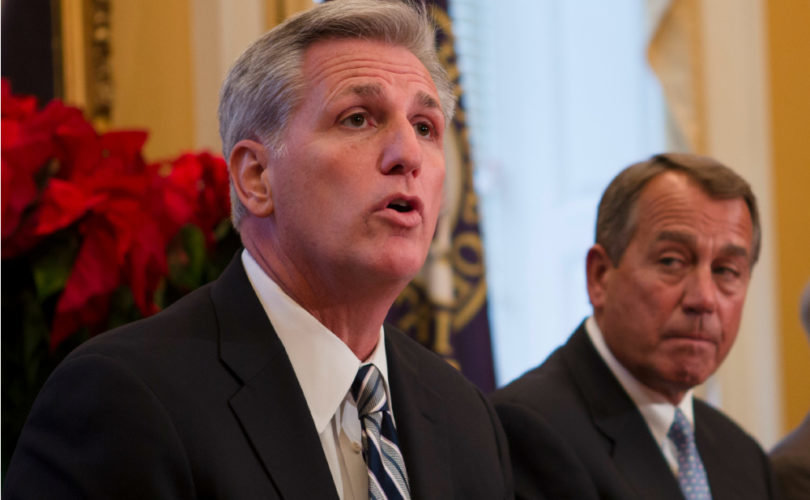 House Majority Leader Kevin McCarthy says he is bringing H.R. 36 -- which bans most abortions after 20 weeks' gestation -- to the House floor.McCarthy's office / Flickr

WASHINGTON, D.C., April 15, 2015 (LifeSiteNews.com) — H.R. 36, the “Pain Capable Unborn Child Protection Act,” is headed back to the House floor. But changes made since January may make the bill unsupportable for some pro-life advocates.

According to National Journal and The Bellingham Herald, House Majority Leader Kevin McCarthy told reporters on Monday that he is bringing H.R. 36 — which bans most abortions after 20 weeks' gestation — to the House floor. He did not give a timeline.

Both the Herald and National Journal say Rep. Renee Ellmers, R-NC, is backing a draft she was shown earlier this month. Ellmers has come under fire from pro-life leaders since January when she pulled her support for the 20-week ban days ahead of the planned vote, despite voting for the bill in 2013.

The congresswoman said that a requirement for women who have been raped to file a report with police was too narrow. According to Ellmers, in the new draft alleged rape victims will now have to report the rape to the doctor performing the late-term abortion.

“The demand that it be reported to law enforcement was completely unrealistic and only further victimized the victims of rape, and I think that's something that we have to be very conscientious about,” Ellmers told National Journal.

However, the pro-life group SaveThe1, whose members consist of people who survived rape or whose conception came as a result of rape, have said allowing a rape exception at all devalues the lives of children conceived in rape. Additionally, the Rape, Abuse, and Incest National Network supports rape victims reporting their abuse to police.

Ellmers also told National Journal that H.R. 36's incest exception has been expanded from only allowing minors to have abortions. Now, says Ellmers, any woman can get an abortion if she is pregnant as a result of incest.

Pro-life leader and 20-week ban sponsor Rep. Trent Franks, R-AZ, declined to stand behind Ellmers' statements about what the new bill contains, however. “We continue to search for language that will unify the pro-life base,” said Franks in a statement. “However it is completely premature to say what that final language will be. With that said, the draft being discussed now differs in substantive ways from” what Ellmers described.

Ellmers comments on the bill have been confusing. Though she had publicly opposed the bill in January, the day before the scheduled vote on January 21, she said she would vote for the bill.

The version Ellmers supported on January 21 is the same one she voted for in 2013 — and the one she pulled support from just days earlier. By that time, however, House leadership had pulled the 20-week ban from the House floor because of the actions of several Republicans, including Ellmers.

Press staffers for Ellmers and Franks did not return LifeSiteNews' requests for comment on changes to H.R. 36. Ellmers' office did not respond to a query about her January 21 support, or whether she regretted verbally attacking pro-life critics.

A spokesperson for House Majority Leader Kevin McCarthy, R-CA, who controls the floor schedule for the House, did not return a request for comment.

A spokesperson for House Speaker John Boehner, R-OH, told LifeSiteNews that “while discussions continue, there is not currently an agreement.” The spokesperson, Michael Steel, also said that the speaker “has never weighed in specifically on [the rape] provision, to my knowledge.”

Pro-life blogger Jill Stanek, who last month was arrested while protesting the delay in passage of H.R. 36, told LifeSiteNews that “Ellmers is endorsing a loophole big enough for a Mack truck.” She and eleven pro-life organizations are planning another protest outside Boehner’s office on May 7.