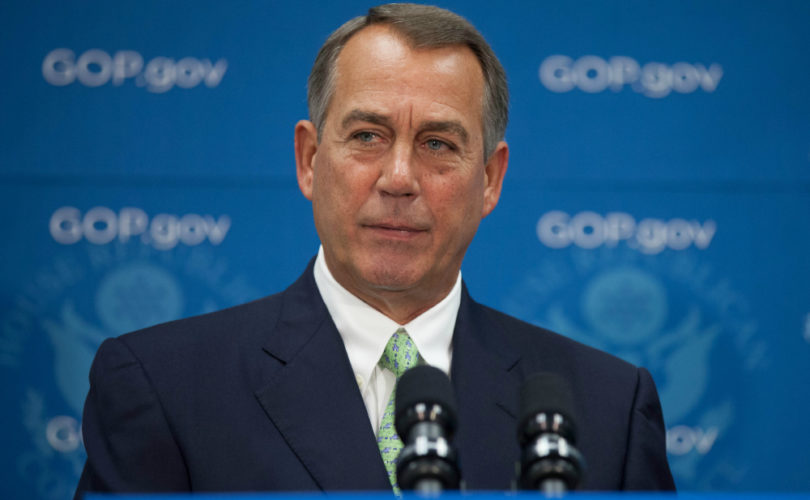 Still, members of the conservative House Freedom Caucus say they will try to get their chamber to defund Planned Parenthood, no matter what.

With almost all Democrats expected to stand behind funding for the beleaguered abortion giant, this could lead to a government shutdown – something GOP leaders are pro-actively trying to avoid.

Senate Majority Leader Mitch McConnell hammered the idea of shutting the government down over Planned Parenthood funding in early August, saying that the media's “focus is on the fact that the government is shut down, not on what the underlying issue that is being protested is.”

Speaker Boehner has pushed for a delayed vote for weeks, despite pressure from his top deputy, Rep. Kevin McCarthy, R-CA, to have a vote quickly. It is important for congressional investigations to take place to get “facts first” to garner public support for defunding, he has argued.

Boehner's spokesperson Emily Schillinger told LifeSiteNews that “no one supports defunding this group more than the Speaker.”

“Of course the House will vote to defund Planned Parenthood,” she reassured.

However, how that vote will take place is still uncertain. Schillinger said that “leaders will discuss with our members about how and when after Congress returns in September. The failed vote in the Senate proves why the ongoing congressional investigations are so crucial. The more Americans learn about Planned Parenthood’s horrific practices, the harder it will be for Democrats to defend them.”

The GOP's strategy contrasts sharply with the near-unanimity of leading Democrats. Not only did the ranking member of the House Oversight and Government Reform Committee, Rep. Elijah Cummings of Maryland, threaten to investigate the pro-life Center for Medical Progress, but party figures such as 2016 presidential candidate Hillary Clinton, House Minority Leader Nancy Pelosi of California, and Senate Minority Leader Harry Reid of Nevada have refused to compromise federal funding for Planned Parenthood.

For the most part, Democrats have indicated their dedication to Planned Parenthood's funding could go so far as to force a government shutdown if the GOP does not capitulate. McConnell believes that this has been a successful political maneuver for Democrats as far back as the 1990s.

However, argue 18 Republicans argue the political risks are worth it. They have refused to budget on Planned Parenthood funding in the upcoming budget debate. Led by Jordan, they believe the time is ripe for Republicans to take a stand for life.