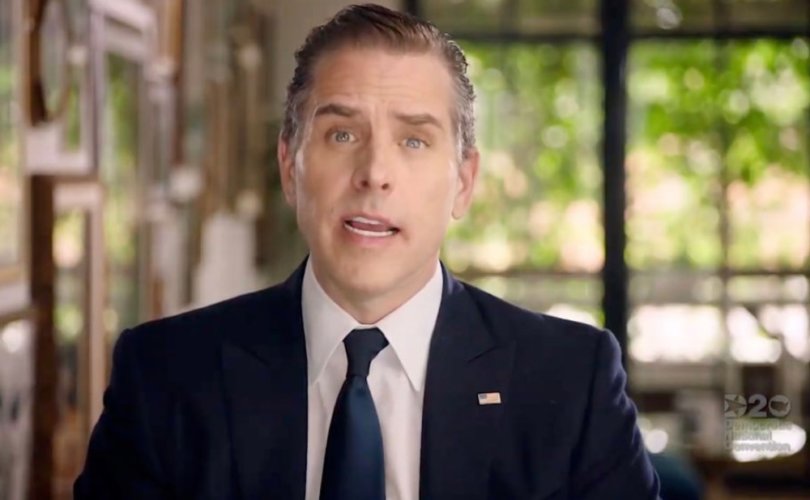 Photo by Handout/DNCC via Getty Images

WASHINGTON, D.C. (LifeSiteNews) – The ranking Republican on the U.S. House Committee of Oversight and Reform sent a letter to Hunter Biden’s financial adviser on Tuesday demanding he appear before the Committee to discuss his client’s business dealings and provide documentation regarding Biden’s suspicious foreign business dealings.

In a letter addressed to Edward Prewitt, a managing director of finance at Prewitt, Mahler, Tucker Private Wealth Management Group, Kentucky Republican James Comer demanded that Prewitt appear before and provide the documents to the Committee.

“More than 150 transactions from the Bidens’ business dealings have been flagged by U.S. banks through filings of Suspicious Activity Reports (SARs) to the Financial Crimes Enforcement Network,” Comer wrote.

“Text messages show that Hunter Biden was aware of these SARs and took steps to avoid detection in his financial dealings,” Comer continued. “Information reviewed by Committee Republicans reveals you were advising Hunter Biden on financial transactions when U.S. banks were flagging suspicious activity by the Biden family.”

Comer also noted that other members of the Committee had seen documents showing that Prewitt and his firm managed accounts for several of Biden’s businesses, including Owasco PC, Owasco LLC, Skaneateles, and Rosemont Seneca Advisors, as well as Hudson West. Comer also alleges that Hudson West was “used in transferring millions of dollars to Hunter and James Biden from CEFC, a company that’s effectively an arm of the Chinese Government.”

“This raises serious questions about what these transactions were for and whether money was transferred to the Biden family from America’s adversaries,” Comer noted.

Comer also noted that Prewitt emailed Biden about an alert put on a Wells Fargo account, noting that Republicans on the Committee saw that Prewitt informed Biden that the bank had flagged the account for further scrutiny.

Comer further noted that White House visitor logs show that Eric Schwerin, one of Biden’s business associates, was named as a calendar invite recipient to the White House 21 times between 2008 and 2016. “Schwerin’s inclusion in these transactions raises questions about President Biden’s involvement in the management and knowledge of these various entities’ activities,” Comer stated.​

Comer demanded that Prewitt appear before Committee Republicans no later than August 3 to brief them on Biden’s business dealings. Comer also demanded all documents related “all documents, communications, and information related to SARs flagged by U.S. banks connected to Hunter Biden or any business entity connected to Hunter Biden, James Biden, or other Biden family members and associates.” Prewitt has until August 10 to hand over the documents.

“Committee Republicans are committed to following Hunter Biden’s money trail — consisting of many complex international transactions worth millions of dollars,” Comer concluded. “The American people deserve to know the President’s connections to his son’s business deals, which have occurred at the expense of American interests and may represent a national security threat.”

Comer has attempted to investigate Hunter Biden’s business dealings before.

In May, he wrote a letter to 13 banks, including Morgan Stanley, Wells Fargo, and Bank of China asking for financial records and documents discussing Hunter Biden, his uncle James Biden, Schwerin, and others. The letter followed a CBS report that came out in April covering the alleged transactions. He sent a similar letter to Treasury Secretary Janet Yellen the same month, which was unanswered.

He sent another letter to Yellen early this month making the same demands, alleging that Yellen’s lack of response should “raise new questions about the degree to which the Biden Administration is using the federal government to provide cover for the Biden family and its associates.”

Early this month, Comer announced that he would launch an investigation into Hunter Biden’s business dealings if Republicans took back the House in November.

Evidence taken from a laptop that formerly belonged to Biden has linked the Biden family to shady business dealings with the now-defunct Chinese energy firm CEFC. Documents on the laptop show that Hunter made a multimillion-dollar deal with the company after bragging about family connections. The laptop also connects Biden to an American biolab contractor in Ukraine that specialized in pathogenic diseases.

The White House has repeatedly denied claims that the president knew of his son’s business dealings, despite widespread evidence to the contrary, which LifeSiteNews has covered. In April, then-Press Secretary Jen Psaki answered “Yes” when asked if “the President has said that he never spoke to his son about his overseas business dealings. Is that still the case?”

Comer’s letter comes after whistleblowers claimed that the Federal Bureau of Investigation (FBI) and Department of Justice (DOJ) attempted to cover up stories related to Hunter Biden’s laptop as “misinformation.”

Nearly two-thirds of Americans agree Biden is ‘likely’ to be ‘compromised’ by Chinese dealings: poll