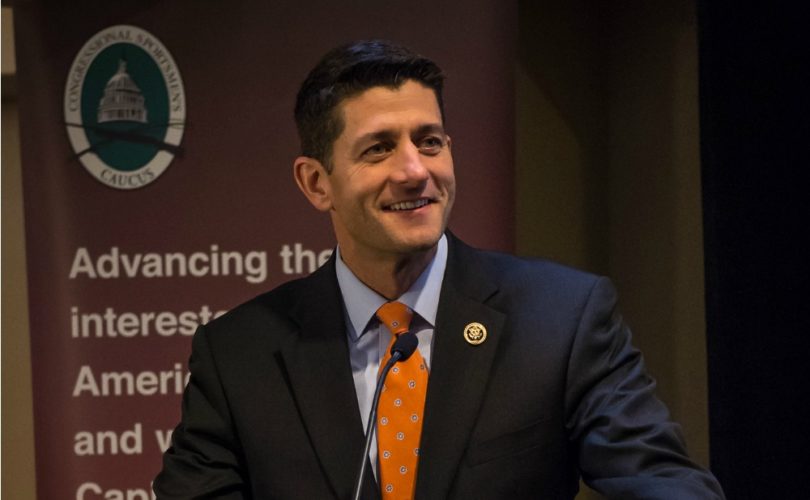 WASHINGTON, D.C., December 18, 2015 (LifeSiteNews) – Both houses of Congress easily passed an omnibus spending bill that fully funds Planned Parenthood and provides hundreds of millions of dollars for “family planning,” while including some pro-life reforms.

The must-pass legislation sailed through the House on Friday morning by a vote of 316-113, garnering more votes from Democrats (166) than Republicans (150). It then passed the Senate, 65-33.

The $1.1 trillion package, which funds the federal government through next September, includes $286 million for Title X family planning spending, much of which goes to Planned Parenthood, the nation's leading abortion provider.

Planned Parenthood Vice President Dana Singiser boasted that the funding survived even after “extreme members of Congress spent an entire year targeting access to reproductive health care at every opportunity — even threatening to shut down the government.”

Pro-life lawmakers were divided on the 2,009-page bill, supported by many Republicans for lifting the ban on U.S. oil exports. Many conservatives – including Reps. Jim Jordan, Timothy Huelskamp, Marsha Blackburn, Dave Brat, and Dana Rohrbacher – voted nay. But some pro-life stalwarts voted for the bill – like Reps. Chris Smith, Tim Walberg and the retiring Joe Pitts – alongside Republican moderates and Democrats like Nancy Pelosi and Charlie Rangel.

Presidential hopefuls Ted Cruz, Lindsey Graham, Rand Paul, and Bernie Sanders voted against it. Marco Rubio was not present for the vote, but his campaign said in a statement that Rubio has “consistently voted against those sorts of bills.”

“The bill failed to include a single major pro-life policy rider, despite the requests of over 120 members of Congress and the disturbing revelations about Planned Parenthood brought to light this year,” said Congresswoman Diane Black, R-TN, who voted against the bill.

The House Freedom Caucus offered a series of amendments to the bill defunding Planned Parenthood, strengthening conscience protections for pro-life physicians and organizations, and ending all U.S. funding for the United Nations Population Fund (UNFPA). The House Rules Committee rejected these riders earlier this week, as Speaker Paul Ryan said he did not want conservative amendments added to the bill that would drive away his Democratic colleagues.

The committee also rejected an amendment to increase vetting of refugees who enter the United States from the terrorist hotbeds of Syria and Iraq, which had previously passed the House, with 47 Democrats adding strong bipartisan support.

“Republicans’ desperate thirst for lifting the oil export ban empowered Democrats to win significant concessions throughout the Omnibus, including ridding the bill of scores of deeply destructive poison pill riders,” Nancy Pelosi wrote to her Democratic colleagues, asking them to support the bill. In the end, only 18 Democrats voted no.

Speaker Paul Ryan defended the bill on Wednesday, saying, “We are maintaining all of our pro-life protections, including the Hyde Amendments; and we are making cuts to the UNFPA program.” The bill reduces UNFPA funding by seven percent.

The bill includes provisions that rein in the IRS process of approving non-profit 501(c)4 groups, a process that had been used to bludgeon pro-life conservatives, and another rider preventing the government from forcing federal contractors to reveal their political contributions – an amendment that was strongly opposed by House Democrats concerned about favoritism and political transparency.

It also includes what one observer called “modest but meaningful” restrictions on human embryo genetic manipulation.

“In divided government, no one gets exactly what they want,” Speaker Ryan said of the messy bill, which many congressmen said had been initiated by former House Speaker John Boehner.

The inclusion of the controversial funding for Planned Parenthood continues a strategy also begun under Boehner, to defund Planned Parenthood in a reconciliation bill that President Obama will veto but not to insist on defunding in must-pass spending bills. In private meetings with congressmen, Republican leaders in both the House and the Senate place avoiding a government shutdown as their top priority.

“Ever since the Republican Party became the party of keeping the government open at all costs, we get bills like this,” talk show host Rush Limbaugh told his audience this week. “It fully funds Planned Parenthood…It is beyond comprehension, and it is a total squandering of moral authority to fully fund the butchery at Planned Parenthood.”

Pro-life leader: A government shutdown would have accomplished nothing and hurt the pro-life cause