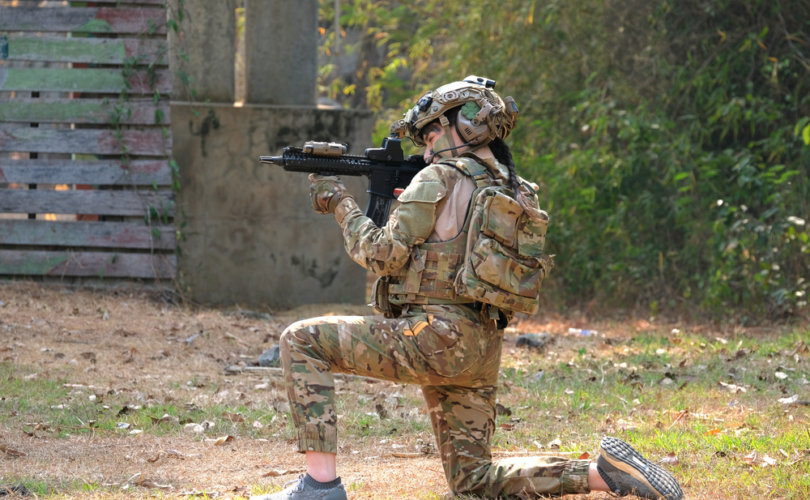 The requirement forcing young women between the ages of 18 and 26 to register for Selective Service now awaits only Senate reconciliation and the president’s signature after the U.S. House of Representatives voted Thursday night to pass a crucial national defense bill containing altered language forcing young women to be drafted alongside men in the event of future military conscription.

The $778 billion National Defense Authorization Act (NDAA), an annual defense package, was passed after 181 Democrats and 135 Republicans in the House voted to approve it.

Only 38 Democrats and 75 Republicans voted against the legislation.

The policy bill will now be punted back to the Senate for reconciliation with an earlier version of the legislative package already approved by the Senate Armed Services Committee (SASC).

The SASC had voted 23-2 to approve its version of the bill in a closed-door session on July 21, just days after it was announced that language in the existing draft law had been modified to eliminate reference to “males” and instead require “All Americans” between the ages of 18 and 26 to sign up for Selective Service.

Senate Armed Services Chair Jack Reed wrote the draft of the proposed changes in July, tacking them onto the NDAA for the 2022 fiscal year, a piece of legislation Congress was already poised to pass.

As reported by The Hill, the full Senate is expected to consider the House’s approved version of the NDAA in October, after which the approved and reconciled act will be sent to the president’s desk to be signed into law.

The House’s move to approve the changes Thursday comes after months of debate, with a handful of Republicans pushing back on the modifications made to the existing Selective Service law.

Under the new language, failure of young women to register for Selective Service would make them subject to the same penalties as men, including fines of up to $250,000 or imprisonment for up to five years.

As reported by the Daily Wire, Republican members of the House Freedom Caucus held a press conference Wednesday to slam the provision in the bill that would require young women to register for the draft.

“Look, right now, today, if you vote for the NDAA, you are voting to draft our daughters,” said Republican Rep. Chip Roy of Texas. “There is no other position you can take. The current law of the land does not have a requirement that our daughters be drafted, OK? If this NDAA is passed and signed into law, then our daughters will be required to sign up for Selective Service and make themselves available for the draft.”

While the United States has not instituted a draft since the Vietnam War, moves to require women to sign up for Selective Service have grown over the years as more military occupations, including combat roles, have been opened to women.

Female members of the U.S. Armed Forces are currently allowed in every military occupation after the 1994 rescinding of the 1988 “Risk Rule” and the 2015 move by the Pentagon to open all military positions, including combat roles, to women.

According to the Center for a New American Security (CNAS), “women have been able to serve in almost all Air Force and Navy positions since the mid-1990s, save for submarines and some small vessels.”

Last year, the issue of extending the draft to include women was brought before Congress in a March 2020 report by the National Commission on Military, National, and Public Service.

According to the report, “[t]he Commission concluded that the time is right to extend Selective Service System registration to include men and women, between the ages of 18 and 26. This is a necessary and fair step, making it possible to draw on the talent of a unified Nation in a time of national emergency.”

In the Wednesday House Freedom Caucus press conference, Rep. Roy contended that the move to require girls to register for the draft “undermines” the national identity of the United States.

“I cannot put into words the extent to which that idea angers me and undermines who we are as a nation and I cannot believe that House Republicans are sweeping it aside, sweeping it under the rug, refusing to talk about it while they blindly march forward saying the ‘conference’ supports passage of the NDAA,” he said.

Republican Rep. Mary Miller of Illinois joined Roy in opposing the NDAA with its current provisions regarding women and the draft, saying the significant alteration of language has been quietly implemented and is an example of the “left-wing, woke agenda gone too far.”

“As usual, with the Swamp, the biggest scandal in the bill is the quietest one that they are trying to sneak in and hope no one notices,” Miller said. “This defense authorization, for the first time in our history, would require teenage girls to register for the draft. No one knows about this because the Democrats have convinced the media that gender no longer exists so this isn’t a big deal.”

“But I want to make sure the American people know, the Democrats and, sadly, some Republicans want to draft your daughters,” the Illinois representative continued.

“This is wrong, and it’s immoral, but they are doing it anyway. We are definitely proud of the courageous women who have served and are serving in our military and defending our nation, but our mothers, sisters, wives and daughters should not be part of this draft. This is left-wing, woke agenda gone too far,” Miller said.