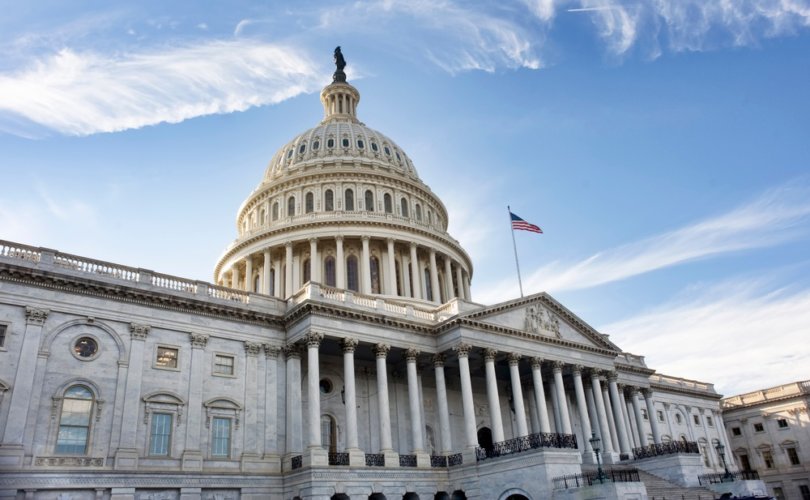 WASHINGTON, D.C. (LifeSiteNews) — The U.S. House of Representatives on Wednesday passed a sweeping new bill to expand the federal government’s ability to spy on Americans in the alleged effort to combat “domestic terrorism.”

H.R. 350, or the “Domestic Terrorism Prevention Act,” was passed in a 222-203 vote almost entirely along party lines, with all House Democrats and just one House Republican, Rep. Adam Kinzinger of Illinois, voting to approve the measure.

The Hill reported the legislative proposal would create “domestic terrorism offices within the Department of Homeland Security (DHS), Department of Justice (DOJ) and FBI that would be tasked with monitoring and scrutinizing potential terror activity,” specifically emphasizing terror activity motivated by “white supremacist” or “neo-Nazi” sentiments.

Democrats have largely promoted the bill as a response to the horrific mass shooting perpetrated by an avowed “white supremacist” gunman (who also claimed to be in the “mild-moderate-authoritarian Left category”) at a Buffalo, New York, grocery store last week.

However, Republicans have blasted the measure for giving the federal government far too much police power.

According to Texas Republican Rep. Chip Roy, the bill constitutes the “empowerment of the federal bureaucracy to target Americans.”

“This is nothing more than empowering the federal government to police thought and speech in the United States of America, and we should oppose it roundly,” he added.

The bill has also been slammed for narrowing the definition of domestic terrorism to focus on “white supremacist” attacks, at a time when mainstream conservative perspectives on matters ranging from immigration law to Critical Race Theory are often baselessly assigned the “white supremacy” label.

In a May 19 editorial, National Review argued that “the Democrats’ proposal would actually create indefensible exceptions in terrorism law,” going so far as to shield radical Islamic jihadists from the reach of federal law.

“It would narrow the scope of terrorist activity that existing statutes can reach — for the blatantly political purpose of labeling white supremacism, alone, as the nation’s urgent domestic security challenge,” the editors added, noting that investigative resources will be arbitrarily diverted toward alleged “white supremacy” instead of other potential sources of domestic terrorism.

“Democrats would then, we can be sure, demagogue conservative policy preferences — e.g., Second Amendment rights, free expression, opposition to progressive indoctrination in the schools and other institutions — as catalysts of white supremacism that must be monitored by the Justice Department,” National Review suggested.

“As we learned from 20th-century domestic-spying scandals, loose legal standards invite the government to invoke ‘domestic terrorism’ as a pretextual rationale for surveillance of the opposition,” the outlet added.

Law-enforcement agencies already have a rich arsenal of authorities to monitor and prosecute terrorists. The Domestic Terrorism Prevention Act is sheer politics | The Editors https://t.co/RovwfR030J

Federal lawmakers aren’t the only ones looking to capitalize on the horrific massacre in New York to expand the reach of government bureaucracy.

New York’s Democratic Gov. Kathy Hochul on Wednesday announced she will form a special police unit which will, among other things, work to fight the so-called “epidemic” of “hate speech” in response to the mass shooting in Buffalo, which was at least partially inspired by radical rhetoric on the internet.

“In wake of the racist act of terror in Buffalo, New York will lead the charge to confront this epidemic head-on,” she added.

Democrat lawmakers and legacy media outlets have emphasized the Buffalo shooter’s alleged adherence to the notion of “replacement theory,” which suggests that leftist elites are promoting widespread immigration to “replace” the White majority of the U.S.

Some conservatives, meanwhile, have pointed out that some of the most prolific purveyors of the alleged “conspiracy theory” have been left-wing pundits and media figures themselves, who have often celebrated the notion that minorities will soon replace Whites as the majority population in America.