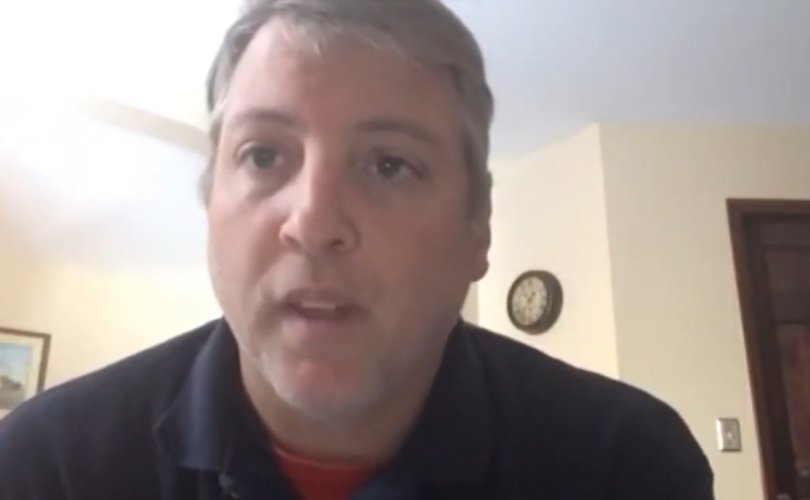 WASHINGTON, D.C. (LifeSiteNews) – House Republicans Jim Jordan of Ohio, ranking member of the House Judiciary Committee, and Mike Johnson of Louisiana, ranking member of the Constitution subcommittee, launched an investigation last week into the Department of Justice’s (DOJ) treatment of pro-lifers in the wake of the arrest of Catholic pro-life leader Mark Houck.

“Several recent actions by the Department reinforce the conclusion that the Justice Department is using its federal law-enforcement authority as a weapon against the Administration’s political opponents,” the congressmen wrote in a letter to Jacqueline Romero, U.S. attorney for the Eastern District of Pennsylvania, and to Attorney General Merrick Garland sent last Thursday.

“Since the unprecedented leak of a draft Supreme Court opinion in Dobbs v. Jackson Women’s Health Organization, the Justice Department has politicized enforcement of the Freedom of Access to Clinic Entrances (FACE) Act,” the letter said.

The FACE Act, signed in 1994, is designed to protect those seeking to enter either an abortion clinic or a pro-life pregnancy center by criminalizing blocking entry of the clinic, and offers protections for clinics and churches against intimidation and violence.

DOJ conducted an armed pre-dawn raid at the home of a pro-life leader in front of his wife and children, while those responsible for nationwide vandalizing and firebombing of pro-life pregnancy centers walk free.

The Biden/Garland two-tiered system of justice is a travesty! https://t.co/f38Im5Urmb

The congressmen informed Romero and Garland that they were launching the investigation in the wake of the Federal Bureau of Investigation’s (FBI) raid of Houck’s rural Pennsylvania home, stating, “We write to conduct oversight of your authorization of a dawn raid of the home of a pro-life leader, in front of his wife and seven children, when he had offered to voluntarily cooperate with authorities.”

The letter goes into detail about Houck’s arrest by over 20 FBI agents over an incident that took place at a Philadelphia abortion clinic in October 2021 when Houck was protecting his son from an abusive abortion clinic “escort.” The letter further contrasts the agency’s handling of Houck with its handling of pro-abortion terrorists, stating, “The Department’s treatment of Houck stands in stark contrast to its treatment of ‘potential acts of domestic violent extremism’ against pro-life facilities.”

The letter mentions an attack in mid-June on the HOPE Pregnancy Center in Romero’s district and notes that he did not release a statement about the incident to the press.

The congressmen also mentioned the radical pro-abortion terrorist group Jane’s Revenge, which carried out a series of attacks on churches and pro-life pregnancy centers in the wake of the draft opinion leak from May into July.

Jane’s Revenge declared open season on pro-lifers and pro-life organizations in mid-June after a 30-day period for pro-life organizations to disband was ignored. The organization also called for a “Night of Rage” after the overturn of Roe v. Wade and has taken responsibility for at least 18 arson attacks against churches and pregnancy centers. No arrests have been made in the ongoing investigations into the attacks as of mid-September.

“While the FBI says that it is investigating a ‘series of attacks and threats targeting pregnancy resource centers, faith-based organizations, and reproductive health clinics,’ to our knowledge, the Department and FBI have not executed any SWAT team dawn raids to make arrests of anti-life activists,” the congressmen wrote.

The letter also noted an attack on an 84-year-old pro-life volunteer in Michigan who was shot after a “tense conversation” with someone over a ballot proposal in the state that would legalize abortion to the moment of birth. The congressmen wrote that “There has been no outcry or press conference from the Justice Department in response to this crime.”

“The Department’s lackluster response to the attacks against pro-life facilities demonstrates that the Biden Administration would rather cater to the radical anti-life movement than help facilities that protect pregnant women in need,” the letter concluded.

The congressmen demand Romero and the DOJ hand over any documents and communications related to the enforcement of the FACE Act from the leak of the draft opinion in May to the present, to the DOJ’s Reproductive Rights Task Force, to attacks on pro-life pregnancy centers from the leak of the draft opinion to the present, to the attack on HOPE Pregnancy Center in Philadelphia, and to the arrest of Houck. Romero and the DOJ have until October 20 to deliver all requested documents and communications.

“This letter serves as a formal request to preserve all existing and future records and materials in your possession relating to the topics addressed in this letter.”

The DOJ has filed charges against other pro-life activists in the wake of Houck’s arrest.

The day before Jordan and Johnson sent their letter last week, the FBI filed charges against another 11 pro-lifers, including a concentration camp victim, for violations of the FACE Act for involvement in a peaceful pro-life rescue last year in Nashville, Tennessee. The FBI conducted a raid against the home of one of those charged in connection with the event, pro-life activist Peter Vaughan. Like Houck, Vaughan was arrested with FBI agents’ guns drawn in front of his children.

A week after Houck’s arrest, Fr. Fidelis Moscinski, a pro-life priest and Red Rose Rescuer, was arrested with similar charges filed against him for chaining the doors of a New York Planned Parenthood clinic in July, as LifeSiteNews reported.

The charges against pro-lifers follows criticism that the DOJ is being politicized, with Garland ordering an August raid of former President Donald Trump’s Mar-A-Lago estate, the FBI asking Facebook and Big Tech companies to censor news surrounding Hunter Biden’s laptop and launching investigations against parents for protesting school COVID policies.

Republicans in both houses of Congress sent letters to Garland and FBI director Christopher Wray after the FBI’s raid on Houck’s home.

In a September 28 letter from Republicans in both houses, lawmakers demanded an explanation for the FBI raid of Houck’s home and stated that the raid “appears to be an extraordinary overreach for political ends.” The letter asked for a response by September 30, 2022.

A letter from Republicans on the Senate Judiciary Committee sent the following day stated that the FBI must justify its reasoning behind Houck’s arrest, that an 11-month delay in charging Houck from the initial confrontation with the abortion clinic “escort” gives rise to questions about political motivation.