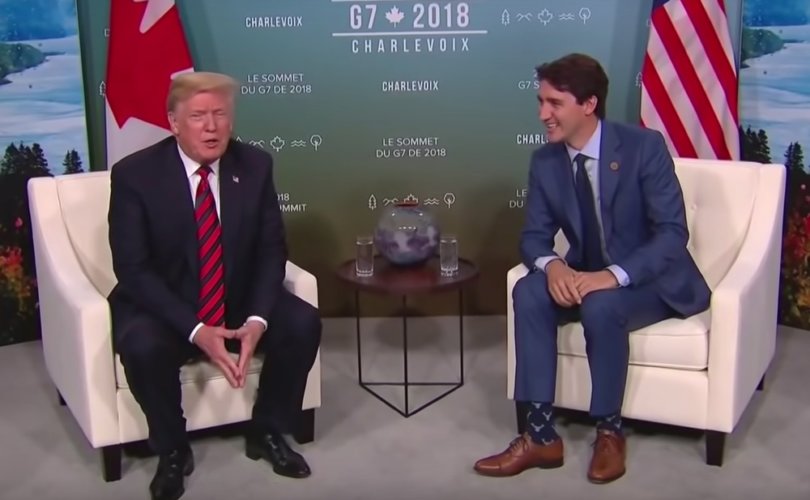 WASHINGTON, D.C., November 19, 2018 (LifeSiteNews) – Among the accomplishments President Donald Trump is most proud of is renegotiating the North American Free Trade Agreement (NAFTA) between the United States, Canada, and Mexico. But a group of GOP lawmakers voiced concerns over the ramifications of language about LGBT “discrimination.”

At issue is Chapter 23 of the deal, under which all three countries agree to “implement policies that protect workers against employment discrimination on the basis of,” among other things, “sexual orientation” and “gender identity.”

“We recognize your tireless efforts to protect the American worker and the American economy,” 38 Republican members of Congress wrote in a November 16 letter to the president. “We are, however, deeply concerned by the unprecedented inclusion” of “sexual orientation and gender identity (SOGI) language for the first time in a Free Trade Agreement.”

“A trade agreement is no place for the adoption of social policy,” the signatories declared, warning that the elevating SOGI classifications to the same level as biological sex would “cause unnecessary confusion in further international treaties” and U.S. laws, as well as set a “dangerous precedent” for future judicial cases and administrative actions by future presidents.

The letter argues that at the same time the administration is working to apply a science-based understanding of gender to federal rules and regulations – exercising America’s “right to decide when, whether and how to tackle issues of civil rights, protected classes, and workplace rights” – this “contradictory language” undermines the pursuit of a “cohesive agenda.”

“It is especially inappropriate and insulting to our sovereignty to needlessly submit to social policies which the United States Congress has so far explicitly refused to accept,” the letter continued, noting that the language effectively codifies Obama-era executive orders on the subject, and would effectively bar Trump from rescinding them.

The group of Republicans, which includes House Freedom Caucus chair Mark Meadows, Rep. Steve King of Iowa, and Rep. Diane Black of Tennessee, is calling on Trump to remove the offending language before signing the finalized agreement on November 30.

The feasibility of removing the language, which was originally sought by Canadian Prime Minister Justin Trudeau, at this late stage is unclear, Politico reported.

The Trump administration could ask Canada and Mexico to agree to its removal; barring that, it could try to cancel it out in the eventual legislation for implementing it in the U.S. It could be modified via side letters, as well. In any event, it must be ratified by Congress before taking effect.

GOP Rep. Doug Lamborn of Colorado told Politico he believes the language could be altered without reopening negotiations on the deal itself, but “in my opinion it’s bad enough” that “they should consider taking it out.”

“This is language that is going to cause a lot of people to reconsider their support of the trade agreement, and to the point that it may endanger the passage of the trade agreement unless something is done,” he said, adding that he currently plans to vote against the bill and “would encourage others to be a no vote unless something is done. And things could be done within the agreement.”

It’s unknown whether the Mexican government would object to losing the language. The Washington Blade reported that Trudeau says the bill is a “good agreement that I think represents Canadian values,” but won’t publicly discuss how potential future negotiations regarding the language.