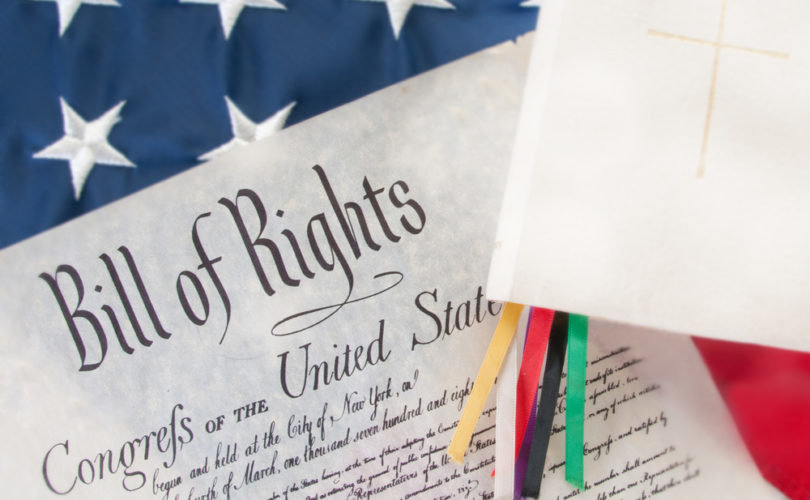 WASHINGTON, D.C., April 22, 2015 (LifeSiteNews.com) – D.C.-based religious organizations saw some of their First Amendment rights protected by a House committee last night — even as a committee spokesperson told LifeSiteNews that another bill described as “unconstitutional” would not be given the same legislative scrutiny.

On Tuesday evening, the House Committee on Oversight & Government Reform (COGR) marked up a resolution to disapprove of the “Reproductive Health Non-Discrimination Act” (RHNDA). Signed by the mayor of the District of Columbia, Muriel Bowser, in January, the Act makes it illegal for any employer, including religious and pro-life organizations, to use a person's belief or actions about abortion in employment considerations. Abortion coverage by employers is also required.

The Committee will not, however, consider a resolution of disapproval against a D.C. bill that forces religious groups to sponsor gay rights events. A spokesperson for the Committee told LifeSiteNews that the gay rights bill was unconstitutional, and therefore did not need to be considered for disapproval.

Under existing federal law, both D.C. measures have 30 legislative days to be disapproved by Congress and President Obama. If this does not happen, they become law — which is expected to happen by the end of next week. An HRAA disapproval resolution was introduced last week by Rep. Vicky Hartzler, R-MO, and the pro-life disapproval resolution was introduced by Rep. Dianne Black, R-TN.

Republican Senators James Lankford of Oklahoma and Ted Cruz of Texas have introduced similar pieces of legislation in the Senate.

RHNDA has drawn support from those who say it prevents discrimination against women, but opposition from the Cardinal Newman Society. The Catholic-based group says the Supreme Court's Hobby Lobby decision in 2014 should pre-empt the law.

It also drew opposition from former D.C. mayor Vincent Gray, who last year wrote of his office's concerns that the Act would violate both federal law and the First Amendment related to religious liberty. While Gray “applaud[s] the goals of this legislation,” his assessment noted that the Act's language could be considered a violation of the U.S. Constitution's guarantee of equal treatment, as its supporters are only aiming to protect alleged rights of one gender.

While any measure of disapproval is likely to pass the GOP-dominated committee and the full House, passage into law is uncertain given the pro-abortion preferences of President Obama. Additionally, a bill that passes the House first, and then the Senate, would need to pass a 60-vote threshold in Congress' upper chamber — though if the GOP-dominated Senate were to pass its own bill first, only a 50-vote threshold would be required.

Democrats are using the disapproval debate to defend abortion. House Minority Leader Nancy Pelosi, D-CA, said in a statement today that “allowing employers to fire employees for using birth control, or in vitro fertilization, or any other reproductive health care service is an unconscionable intrusion into workers’ personal lives.”

Pelosi's statement came one day after D.C.'s Democratic non-voting Representative to Congress, Eleanor Holmes Norton, held a press conference with Catholics for Choice, national gay rights groups, and a national atheist organization, among other groups opposed to the House's action.

Norton and those who joined her at the press conference said disapproving of RHNDA was an example of Congress meddling in local affairs. However, March for Life Action Vice President Tom McClusky told LifeSiteNews that the opposite was true.

“The list of those supporting this effort to take away the rights of D.C. residents are mostly national groups with little interest of the day to day concerns of those who live in the nation's capital,” McClusky said. “Those who oppose the liberal attempts represent D.C. charities, schools, and relief services.”

“Eleanor Holmes Norton would like to portray this as the U.S. Congress vs. the D.C. people when in fact this is the D.C. government against the religious and moral freedoms of D.C. residents,” he told LifeSiteNews.

The other bill signed by Bowser that is concerning to religious liberty advocates is the “Human Rights Amendment Act” (HRAA). According to the Committee Report published on October 15, 2014, “educational institutions affiliated with religious organizations would not be allowed to prohibit gay and lesbian students groups from using the school facilities and services.”

The report says the law does not require funding or official recognition for such groups, but Heritage Foundation policy experts Ryan Anderson and Sarah Torre disagree. Anderson and Torre wrote that the law “could force Christian schools to recognize an LGBT student group or host a 'gay pride' day on campus.”

HRAA is not being considered for disapproval by the House Oversight Committee. Committee spokesperson Melissa Subbotin told LifeSiteNews that “the Committee does not need to take up HRAA.”

“The Council of the District of Columbia’s legislation…is unconstitutional from a First Amendment perspective and it is in conflict with an existing act of Congress,” Subbotin said in an email. “In either case, it will not stand, and does not require Committee action.”

Subbotin explained that “the Constitution gives Congress the power to 'exercise exclusive legislation in all cases whatsoever' for the District of Columbia. In 1989, the Religious Liberty Act was signed into law. It exempts religious institutions from the DC Human Rights Act, appropriately respecting the constitutional separation between church and state.”

“Once again…the Council of the District of Columbia is thumbing its nose at Congress,” said Subbotin.

LifeSiteNews submitted a request for comment to the office of the D.C. Attorney General regarding Subbotin's comments, but no reply had been received as of press time.

“If they fail, it leaves Catholics in a very bad position,” Reilly said. “They should be able to win a costly court battle, but if that fails, they can shut down their services, move out of the District, or violate the law and suffer a kind of martyrdom for doing so.”

Earlier this year, a senior GOP Hill aide told LifeSiteNews that “the House will review these bills, especially in light of concerns about religious liberty and conscience rights violations, and respond accordingly.” The aide also said that “Congress will continue to consider [the Abortion Non-Discrimination Act] and will consider ways to protect individuals, organizations, and providers’ religious beliefs and moral convictions.”

Other methods of protecting religious liberty in the District of Columbia are available to pro-life and pro-family advocates, should disapproval resolutions fail. One is new legislation that would override the D.C. Council's laws. Another is using the appropriations process to protect religious liberty.