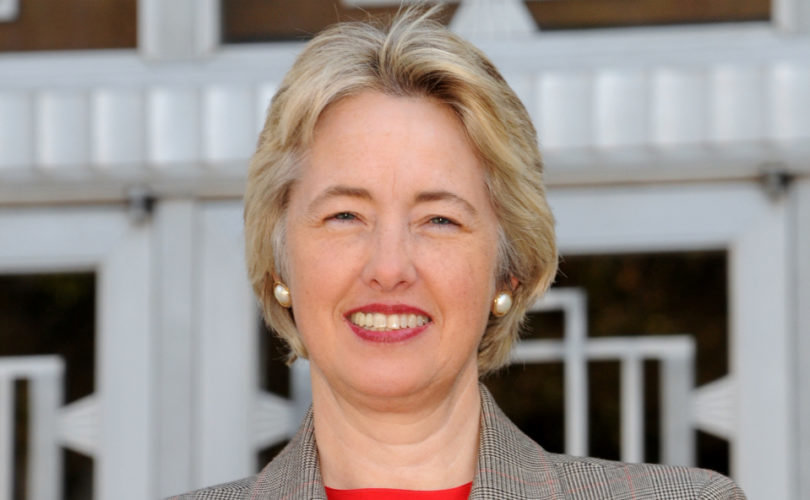 But yesterday, Mayor Annise Parker and City Attorney David Feldman distanced themselves from the subpoenas, saying that they were written by an outside group assisting the city in the lawsuit.

The mayor of Houston is backing away from her city's demand that pastors turn their sermons over to the city. The statements, which came a day after a national outcry against subpoenas targeting five pastors, are the latest turn in a five-month fight over a local ordinance that has led to a lawsuit against the city.

Houston citizens filed the lawsuit to oppose the Houston Equal Rights Ordinance (dubbed “HERO”), which gives biological males the right to use female facilities within the city and endows LGBT citizens with the same employee civil rights status as blacks or women. As part of the fact-finding portion of the lawsuit, the city demanded that pastors turn over “all speeches, presentations, or sermons related to HERO, the Petition, Mayor Annise Parker, homosexuality, or gender identity prepared by, delivered by, revised by, or approved by you or in your possession.”

The subpoenas led to a motion being filed against the city by the Alliance Defending Freedom (ADF) on behalf of the pastors. According to ADF, the “discovery requests” in the subpoenas are “overbroad, unduly burdensome, harassing, and vexatious.” They are also “irrelevant to the [petition] lawsuit, and will have a profoundly negative effect on free speech and the electoral process should they be allowed to move forward.”

The city initially defended the demand. Houston's Chief Policy Officer and Director of Communications Janice Evans told LifeSiteNews that “the subpoenas were issued to pastors who have been involved in the political campaign to organize a repeal of Houston’s new [LGBT] rights ordinance. It is part of the discovery process in a lawsuit brought by opponents of the ordinance, a group that is tied to the pastors who have received the subpoenas.”

But yesterday, Mayor Annise Parker and City Attorney David Feldman distanced themselves from the subpoenas, saying that they were written by an outside group assisting the city in the lawsuit.

Parker's press office did not respond to LifeSiteNews' request for the name of the outside counsel by press time.

Both Parker and Feldman says they were unaware of the subpoenas until this week. Feldman had stood behind them on Tuesday, prior to a national outcry against the subpoenas. Parker said that “the wording was overly broad” in the subpoenas, but that “I also think there was some misinterpretation on the other side.”

Feldman said, “It's unfortunate that [the subpoena effort] has been construed as some effort to infringe upon religious beliefs.”

According to Evans, “the pastors made their sermons relevant to the case by using the pulpit to do political organizing. This included encouraging congregation members to sign petitions and help gather signatures for equal rights ordinance foes. The issue is whether they were speaking from the pulpit for the purpose of politics. If so, it is not protected speech.”

The battle over HERO began in May, when the City Council passed it 11-6, and Parker, an open lesbian, signed it into law. Because Section 6 of the ordinance declared that a “public emergency” existed, the ordinance was to take effect within one month of the mayor's signature, on June 28.

However, thousands of citizens disagreed with the petition, and how it was passed into law. Several groups, most prominently the No UNEqual Rights coalition, said the issue should be put to voters via a ballot petition this fall. They subsequently sent more than 31,000 signatures to the city secretary, nearly twice as many as the 17,269 minimum required for a ballot initiative.

After receiving the petition signatures, the city's secretary said that while signatures were valid, too many pages were not done in line with the city's rules. Thus, Parker's office ignored the petition, which led to a lawsuit by the citizens group against the city. That lawsuit is being heard in January.

Things got more tense after homosexual activists posted the names of the petition signers online. The supporters claim this was done due to concerns about fraudulent signatures, but opponents say it was an intimidation tactic.

In August, Parker said she would delay implementation of the HERO ordinance because of her “expectation that there will be some legal action.”

“I am simply stunned by the sheer audacity of this,” said Dr. Russell Moore, president of the Ethics and Religious Liberty Commission for the Southern Baptist Convention.

“The preaching of sermons in the pulpits of churches is of no concern to any government bureaucrat at all,” Moore said. “This country settled, a long time ago, with a First Amendment that the government would not supervise, license, or bully religious institutions. That right wasn’t handed out by the government, as a kind of temporary restraining order. It was recognition of a self-evident truth.”

According to Moore, “the separation of church and state means that we will render unto Caesar that which is Caesar’s, and we will. But the preaching of the church of God does not belong to Caesar, and we will not hand it over to him. Not now. Not ever.”

“The pastors of Houston should tell the government that they will not trample over consciences, over the First Amendment, and over God-given natural rights,” he said.

Likewise, Catholic blogger Ed Morrissey wrote at HotAir.com that “when it comes to their positions on LGBT issues and 'gender identity'…this demonstrates precisely why these pastors opposed the law in the first place and sued to stop it.”

“The law in question,” according to Morrissey, “would give the local government far too much power to punish legitimate speech and dissent using the rubric of 'equal rights,' even though the effect of the law is to heavily burden the right to speech and right to free religious expression.”

Morrissey concluded that “in the long run, the city may have done these pastors a big favor by tipping their hand so early as to how they planned to use this ordinance all along.”