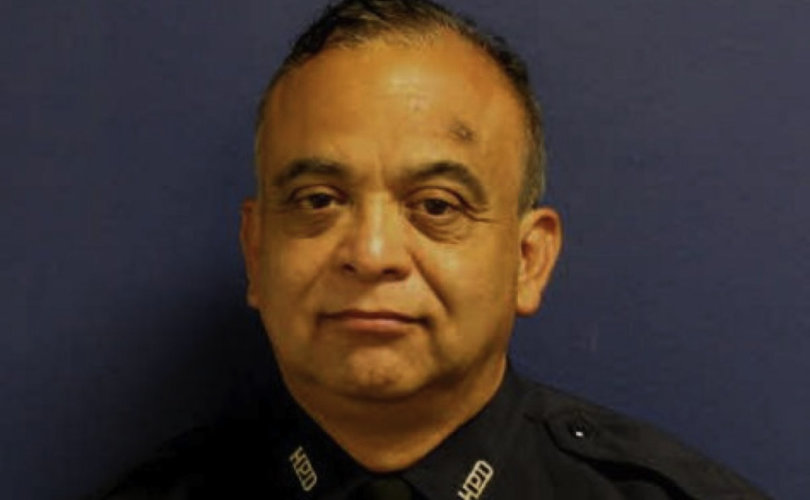 Houston Police Sergeant Steve Perez died while trying to get to work during Hurricane Harvey.

HOUSTON, Texas, August 31, 2017 (LifeSiteNews) – After a veteran Houston police officer died trying to get to work during Hurricane Harvey, his devotion and his family’s faith have inspired the city’s police department as its staff continues to work throughout the catastrophic storm.

Sergeant Steve Perez spent more than two hours trying to report for duty in the early hours of Sunday morning as Harvey entered its third day on land dumping a record amount of rainfall and making many Houston streets impassable.

Perez drowned after entering an overpass in the darkness and heavy rain, likely unable to discern it was flooded.

Perez is survived by his wife, Cheryl, a grown son and daughter, and extended family.

Houston Police Chief Art Acevedo fought back tears addressing a Tuesday press conference confirming Perez’s death, saying it was his privilege to notify the family of the 34-year Houston PD veteran “that he died, that he laid down his life.”

Still, Acevedo said he was heartened in part because he got to learn while at the Perez home “that it’s a family of faith, that has faith in God.”

“And when you have faith, there’s hope,” said Acevedo. “There’s hope in eternal life.”

He went on to say of the experience with the family and their faith, despite how much they’re hurting, “it gives us all collective strength in the Houston Police Department.”

Acevedo recounted how Perez’s wife told him she and her father had urged Perez not to go into work because the conditions were so bad.

“And his response was, ‘We’ve got work to do,’” said Acevedo, visibly moved.

Perez had left extra early for work around 4 a.m. Sunday headed for his duty station in the traffic enforcement division downtown. He “could not find a path” with the rain and dark roads, Acevedo said.

Investigators concluded Perez tried for 2 1/2 hours to find a way there. He then followed protocol and called a superior saying he'd report to a secondary location, the nearest he could reach.

When Perez did not show up for roll call Monday morning, his supervisors contacted his family and began a search. They determined his likely route and narrowed down his last position Monday evening to have been at the Hardy Toll Road in Houston. A dive team was summoned, but a recovery was held off because the rescue attempt would have been too dangerous that night.

“We couldn’t find him,” Acevedo said, choking up before reporters, “and, uh … once our dive team got there it was too treacherous to go under and look for him, so … we made a decision to leave officers there, waiting, until the morning. Because as much as we wanted to recover him last night, we could not put more officers at risk, for what we knew in our hearts was going to be a recovery mission.”

His body was recovered Tuesday morning.

“Steve was one of the sweetest people I've met in this department,” Acevedo said. “I've only been here nine months and we've got, you know, 6,500 employees and I knew who Steve Perez was, because he was a sweet, gentle, public servant.”

Acevedo extolled the commitment of Perez, who was two days shy of turning 61, as testament to that of the Houston PD, also lauding the department’s Harvey response.

“And here’s a man that didn’t spend 20 minutes and then come back and say, hey, I tried,” said Acevedo. “He spent close to two-and-a-half hours, because he has that in his DNA.”

Standing before Perez’ widow with the news, the chief drew on the family’s faith to offer her perspective in that moment.

“And so I told his wife, ‘Let me ask you something, Ma’am, you’re a person of faith, if the Lord was going to take him today, how do you think he would want to go — laying in bed, watching a disaster, or doing what he’s done for 34 years?’” he said.

“The smile that overcame that woman’s face, his beautiful wife, said it all,” recalled Acevedo. “‘If it’s his turn to go,’ she said, ‘this is the way he would have wanted to go.’”

Houston Mayor Sylvester Turner was with Acevedo to confirm the news of Perez’s death. He said the city’s entire workforce was giving its all in response to the horrific storm.

The Houston Police Department posted regarding Perez’s death on Twitter, “Our hearts are heavy, but we will get through this. #HoustonStrong.”

It is with a heavy heart that we announce the tragic in the line of duty death of Sergeant Steve Perez. pic.twitter.com/cHJxjnFgII

Our hearts are heavy, but we will get through this. #HoustonStrong pic.twitter.com/FhiyiNTDcQ

“We are proud of the courage of this 34-year veteran,” a department statement said. “Like Steve, we will not waiver and we will not stop until we meet the immediate safety and security needs of the community Steve and his HPD family love to serve.”

Texas Senator Ted Cruz expressed condolences for Perez’s family and gratitude to first responders, tweeting, “We lift up in prayer the family of @HoustonPolice Sgt. Steve Perez, and give thanks to all the first responders helping to keep Texans safe.”

As of Wednesday, initial damage estimates from about 66 Texas counties and cities were more than $90 million, according to the Dallas Morning News.

Texas Gov. Greg Abbott said he expects the total from Harvey to far surpass the billions inflicted by Hurricane Katrina or Hurricane Sandy.

Responders had made more than 8,500 rescues and more than 26,000 evacuations by Wednesday.

And more than 210,000 Texans had registered for federal disaster assistance, said Abbott. The governor urged other storm victims to apply for aid at disasterassistance.gov.