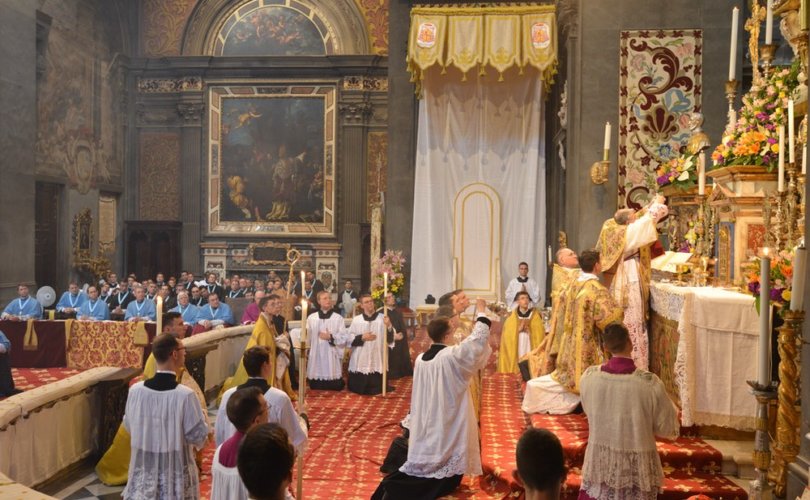 April 29, 2020 (LifeSiteNews) – “But lest we be deceived by the angel of darkness who transforms himself into an angel of light, let this be the supreme law of our love: to love the Spouse of Christ as Christ willed her to be, and as He purchased her with His blood. Hence, not only should we cherish exceedingly the Sacraments with which holy Mother Church sustains our life, the solemn ceremonies which she celebrates for our solace and our joy, the sacred chant and the liturgical rites by which she lifts our minds up to heaven, but also the sacramentals and all those exercises of piety by which she consoles the hearts of the faithful and sweetly imbues them with the Spirit of Christ.”

These words of Pope Pius XII in his 1943 encyclical Mystici Corporis Christi proclaim the Catholic Church’s abiding understanding of her distinct identity and solemn duty as the Mystical Body of Christ – Our Lord’s presence in the here and now, physicalized through the sacraments, structures, and people that are His Church. Just over three quarters of a century later, this understanding has been obscured almost completely, and the resultant devastation is plain for any honest observer to behold.

While denial or despair are the reactions of too many Catholics today, there are those who seem to react to the devastation in a decidedly different manner. Among them are the priests, oblates, sisters, and seminarians of the Institute of Christ the King Sovereign Priest, a young and growing society of apostolic life that is pursuing the comprehensive restoration of Holy Mother Church with supernatural tenacity, reverence, and humility.

“Humility is the very foundation of the Church,” says Canon Matthew Weaver, a priest of the Institute and project manager of the community’s effort to build their U.S. Provincial Headquarters and Shrine of Christ the King. “Sometimes God knocks us down in order that we would re-find that foundation. And when we have discovered it once again, we ought not to be discouraged but thankful, because from that foundation of humility we can start to rebuild the Mystical Body of Christ and make visible once again the majesty of Christ, the majesty of the Church. But as St. Augustine would say, ‘Only where there is humility, there will be majesty.’”

Defending and promoting what the Church has always done

The mission of the Institute of Christ the King Sovereign Priest is “to spread the reign of Christ in all spheres of human life by drawing from the millennial treasury of the Roman Catholic Church, particularly her liturgical tradition, the unbroken line of spiritual thought and practice of her saints, and her cultural patrimony in music, art, and architecture.”

Founded in 1990 and formally approved by the Holy See in 2008, the Institute has grown from a handful of missionary priests in Gabon, Africa to 114 priests, more than 100 seminarians, clerical oblate brothers, a community of sisters, and a lay association serving at 80 apostolates in 12 countries around the world. Growth like this is virtually unheard of in today’s Catholic Church. What’s their secret?

“We strive to promote the rights of Christ as King,” explains Canon Weaver. “He comes first. So we simply try to do today what the Church has always done when Christ has come first. We desire to allow people the opportunity to see the beauty of the truth and attract them to the love of God through that beauty.”

The Institute delivers that beauty through their meticulous offering of the traditional Latin Mass, their exemplary formation of their priests, and their jubilant charism comprising the community life and discipline of St. Benedict, the doctrinal clarity of St. Thomas Aquinas, and the apostolic charity of St. Francis de Sales.

The response from the laity is nearly universal.

“My family and I fell in love with the Latin Mass,” says Jason, a parishioner at the Institute’s apostolate in Chicago, Illinois. “And finding a community with the spirituality of St. Francis de Sales was an answer to our most heartfelt prayers. This is the reason we drive over an hour to attend Mass at an Institute church.”

Another more public hallmark of the Institute’s revitalizing charism is their painstaking restoration of discarded historic church buildings.

Restoring churches, congregations, and culture in the United States

The Institute was invited to establish their first apostolate in the United States in 1996 by His Eminence Raymond Leo Cardinal Burke, then Bishop of the Diocese of La Crosse, Wisconsin. Immediately thereafter, Bishop Thomas Doran invited the Institute into the Diocese of Rockford, Illinois. He entrusted to them the care of St. Mary Church, an elegant specimen of late-nineteenth century neo-Gothic ecclesiastical architecture much beloved by locals which, by the late twentieth century, was nonetheless slated to be closed due to low attendance and disrepair.

Under the care and direction of the Institute, within a few years, the church and congregation were largely restored to their original prestige. Word got out, and the successful venture served as a model that would be improved upon in diocese after diocese as bishops across the country invited the Institute not only to introduce the faithful to the traditional sacraments and liturgy, but also to restore and repopulate magnificent historic churches slated for demolition.

Today, the Institute of Christ the King Sovereign Priest serves in 18 dioceses in the United States.

A shrine to Christ the King

In 2004, Chicago Archbishop Francis Cardinal George was agonizing over the impending demolition of the gutted and abandoned St. Clara/St. Gelasius church on the city’s south side. Built in 1923, the Renaissance-style masterpiece of Henry Schlacks, founder of the architecture department at the University of Notre Dame and a leading light of American revivalist architecture, was the last remaining Catholic church in the area and a gem of our country’s Catholic heritage. When Cardinal George learned of the Institute’s work, he immediately invited them into the archdiocese to take over the otherwise doomed house of worship.

For the Institute, this abandoned treasure in a forgotten part of town represented a profound opportunity: a foothold in a prominent, geographically central city in which to establish their American provincial headquarters and long-envisioned namesake national shrine.

They renamed the church the “Shrine of Christ the King” and immediately got to work. As the congregation grew and prayers and donations came in from across the country, the restoration picked up. Special events held in the church began to revive the cultural life of the surrounding neighborhood, and national events and retreats held at the Institute’s new U.S. headquarters helped unite this young, spiritual family in their ambitious mission to restore Catholic life in America.

But on October 7, 2015, as the second phase of the renovation began, tragedy struck. In the darkness of the early morning, a fire broke out in the church, utterly destroying the roof, the choir loft, the windows, and virtually all the interior furnishings. Eleven years of arduous restoration was obliterated in little more than five hours.

Amid the smoldering ruins, however, the foundation of the church remained. And when firefighters brought forth from within it the 17th-century wooden statue of Christ the Infant King and the gilded Tabernacle containing the Most Holy Eucharist—both virtually untouched by the devastation—the shell-shocked canons and oblates standing outside their ravaged home instantly recognized their Divine cue to begin again building upon its foundation.

Months of deliberations with officials over the fate of the skeletal church followed. Ultimately, the archdiocese deeded the property entirely to the Institute. Canon Matthew Talarico, the Institute’s Provincial Superior in the United States, could now formally declare what so many longed to hear: “We will rebuild the church.”

That their work restoring church buildings serves as a powerful metaphor for their mission of restoring the Church at large has never been lost on the Institute. In fact, for them it is no mere metaphor, it’s their sacramental duty: making the invisible mysteries of eternity visible once again for all to behold.

“We are the religion of the Incarnation,” explains Canon Weaver. “Our Lord, the Word Incarnate, sanctified material reality by becoming flesh. The Church’s abundant tradition of beauty in liturgy, music, art, and architecture is a very important aspect of the Mystical Body of Christ, which prolongs the mystery of our Lord’s redemptive Incarnation until the end of time. Our founder, Monsignor Gilles Wach, reminds us often that the Mass is like a diamond that needs a dignified, beautiful setting to show even more its value and brilliance. So for the Institute, liturgical matters are not minor details but among our primary preoccupations as they always had been for the Church.”

He continues, “The liturgy is our living and vital connection to the faith and its doctrines, our principal means to meeting and knowing Our Lord. That makes the very hard work of restoring and reintroducing the fullness of the Church’s liturgical and cultural traditions—requiring constant study, effort, and most of all prayer—more than worth it. I cannot imagine a more important job.”

Today, undeterred by setbacks and tragedy, their renewed commitment to completing their U.S. Provincial Headquarters and namesake Shrine of Christ the King is the living icon of the Institute’s mission. On a grander scale, it constitutes a bricks and mortar rallying point for the growing movement among faithful Catholics nationwide to restore and rebuild the authentic Roman Catholic Church in America—“the Spouse of Christ as Christ willed her to be.”

As Nathan, a supporter of the Institute’s work and mission from Ave Maria, Florida says, “In a world that feels increasingly lost and torn, the remedy is to acknowledge and affirm the true kingship of Our Lord Jesus Christ. We need this beacon of hope—the Shrine!”

To be a part of and learn more about this historic enterprise to restore the Catholic Church—body and soul—and build a national stronghold in the United States for Christ our Lord and King, click HERE.