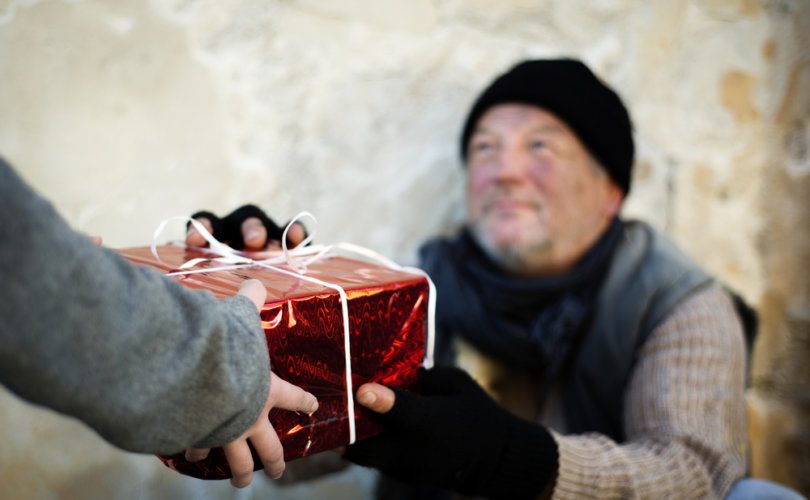 December 24, 2018 (LifeSiteNews) – My daughter and I were out Christmas shopping recently, attending a local winter farmer’s market, washing the car and running some errands.

It was a beautiful weekend day, unseasonably warm for mid-December, making the coming-and-goings more pleasant.

On our way into one stop, we happened to pass by a homeless gentleman seated outside the store.

He sat with his eyes down, and had a sign placed nearby that said, “house burned down, vet, God bless.”

There’s been an increase in people standing at various Des Moines intersections asking for money with signs describing their respective situation, as I imagine is the case in other places. While I’ve certainly been approached for money in parking lots, this was the first time we’d encountered someone sitting outside a retail store in this fashion.

My daughter and I were moved and discussed continually what we could do to help while completing our errand.

The man was just as hesitant to make eye contact when we left as when we’d gone in.

We went to the Chick-fil-A nearby and got him a meal and gift card.

I’d left it to my daughter, who’s 21, to decide which one of us would give the things we’d bought to him. She opted to do so, and I pulled up, waiting at the curb for her to go give him the food, coffee, and gift card.

The gentleman hadn't eaten that day when we made contact with him, and when he saw the gift card he told my daughter, “Oh good, now I can bring my wife some food.”

He made a point of looking up to find me in the car, catch my eye, nod and say thank-you.

My daughter chatted with him briefly and returned to the car.

As we drove away we were in agreement that we needed to do more. So we stopped at the nearest grocery store and picked up some bread, peanut butter, plastic silverware and personal care items – what we thought he and his wife could use short-term but not be burdened with by having to carry.

When we returned to him, we weren’t sure if he’d been drinking the coffee or just using it to keep his hands warm.

My daughter knelt down to him again to explain what was in the bag. He smiled, looked down, possibly a bit embarrassed. But he looked up again my way, smiling reservedly and nodding in gratitude.

They chatted some more. I saw him stand up and she gave him a hug.

Two other people passing by on their way out of the store had slowed down to hand him money while he spoke with my daughter. One, a woman, also stopped and hugged him when she saw my daughter give him a hug.

After he stood as my daughter hugged him I saw that he was shorter than her.

The gentleman told her his name was Shorty.

It turns out that after their house burned down they’d been living in a tent with furniture and their remaining belongings. Shorty told my daughter he and his wife had been kicked out of the tent by police with no time to get their personal effects, so they only had a couple of their things.

He’d built a lean-to from them to live in until the VA can help them – but it'll be another couple months before that happens. His wife is disabled and sits in the lean-to with a little heater.

The couple is in their 60's. Shorty talked with my daughter about getting a bunch of pallets together with carpet squares over the top for their “floor,” so they didn't have to sleep on the cold ground.

I watched my daughter choking up as she spoke with him both times and I wasn’t surprised.

I hadn’t yet heard the specifics, but she’s extremely compassionate. She’d tried to give her only pair of mittens to a homeless man in Washington D.C. while we were there for the March for Life some six years ago, when the weather was brutally cold and it would have been dangerous for her to do so.

But in addition to the tragedy of his overall situation, something Shorty said to my daughter surpassed all else in significance.

He told her, “If this doesn't work out, I know what He has waiting for me will be better, when I get 'home.'”

We drove away in abject sadness at the thought of him and his wife and what they had in front of them, whether or not it means a two-month wait for VA assistance. We couldn’t get past the thought that there was something else we could and should have done.

Even if you were to drop everything and give everything you have, the need in the world is overwhelming and never-ending. I emphasized to my daughter what she already knows – always do what you can, with what you have, for whatever and whoever is in front of you.

“But, we must never forget those in need,” I said.

It’s now been several days since our encounter with Shorty and I remain convinced I didn’t do enough for him.

He stays with me, inside my heart.

The weather continued to be balmy for the next few days, but it’s turned back colder, and I wonder how he and his wife are doing. Did they get hold of some pallets to get themselves off the ground in their lean-to?

But I’m also certain that by his witness of faith, Shorty did more for me and for my daughter than we could have done for him.

As a mom, I’m grateful for the experience for my daughter, her having seen his faith up close.

That’s crucial; one human being in the midst of tremendous need thinking to tell another it’s okay because God’s got it handled. I expect Shorty could save a lot of souls with this kind of message.

It’s a mixed-up world we live in, with tons of evil around, and endless human suffering and failings.

Amidst all struggles there are still plenty of blessings to be grateful for – for me, nothing so much as the gift of encountering Shorty, and by extension his wife, both children of God, with no roof over their head.

Will you join me in praying for them this Christmas? Let’s pray for them and everyone in their situation. And let’s pray too for all who are suffering, to trust in God the way Shorty does.