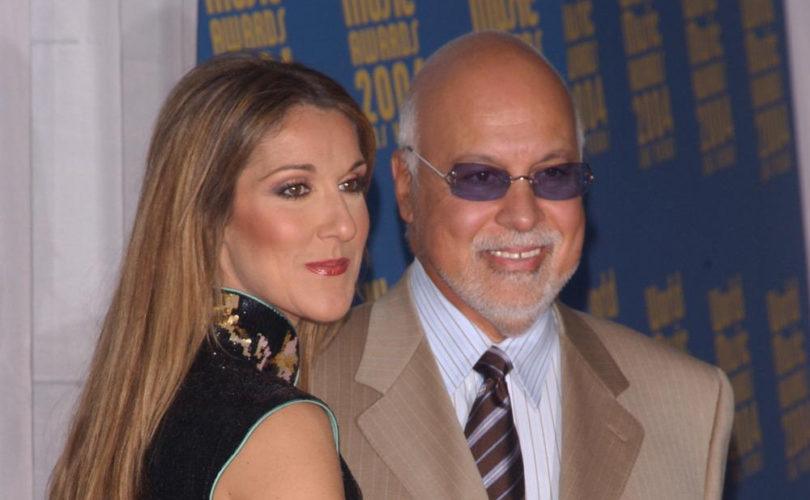 January 15, 2016 (LifeSiteNews) – World-famous Canadian singer Celine Dion is undergoing another chapter in her life as she grieves the death of her beloved husband and former manager Rene Angelil.  Dion’s fairytale life and the fame she brought to her native Canada would never have been if a Catholic priest had not convinced her mother not to abort Celine in 1967.  And it’s likely that her fierce devotion to her husband and family was learned from her mother who gave her life and the example of loving sacrifice.

Even though he was 26 years older, Celine’s devotion to her husband touched the world as she cancelled a major tour to tend to him in his bout with cancer in 2014.

Dion, the bestselling Canadian recording artist of all time, is the 14th child of Adhémar-Charles and Thérèse Tanguay Dion.  The singer revealed in 2001 as she was to give birth to her first child that she herself was almost aborted. When her mother Thérèse was distressed at learning of her pregnancy, she went to a priest. Celine recounts: “He told her that she had no right to go against nature. So I have to admit that in a way, I owe my life to that priest.”

Dion said that she adores her mother, that Thérèse was “the star” of her family. “I'll never forget that she was the one who went knocking on René Angélil's door in the first place. I was just a kid. She was the one who wrote my first song. I owe her everything.”

ARTICLE: ‘She was alive and crying!’: Abortion nurse quits after baby born alive, left to die

In the January 16, 2001 issue of London celebrity magazine Hello!, with a preview in the January 11 National Post, Dion said: “My mother had already brought up 13 children. For more than 20 years, she'd been locked into a hellish cycle of washing, ironing and housework, 365 days a year. She thought, rightly, that she'd done her duty. The two little ones, twins Paul and Pauline, were about to go to school and at last she'd have some time to herself. At last she'd be able to go out, perhaps go travelling with my father and revisit the area where they were both brought up. Then suddenly she was pregnant again. She was so shattered she went to see the parish priest to see if she could do something about it.”

“Once she got over her disappointment that an abortion was out of the question,” added Dion, “she loved me as passionately as she'd loved the last little ones.”

That love for children and family was passed on to Celine as can be seen in her care and concern for her children. “My success is my family,” she told People magazine in 2012. “My life is to be a mom. It is what I enjoy the most. It is my most amazing reward. I will take a chance with my music. I don't take risks with my family.”

ARTICLE: Ten celebrities you might not know are pro-life