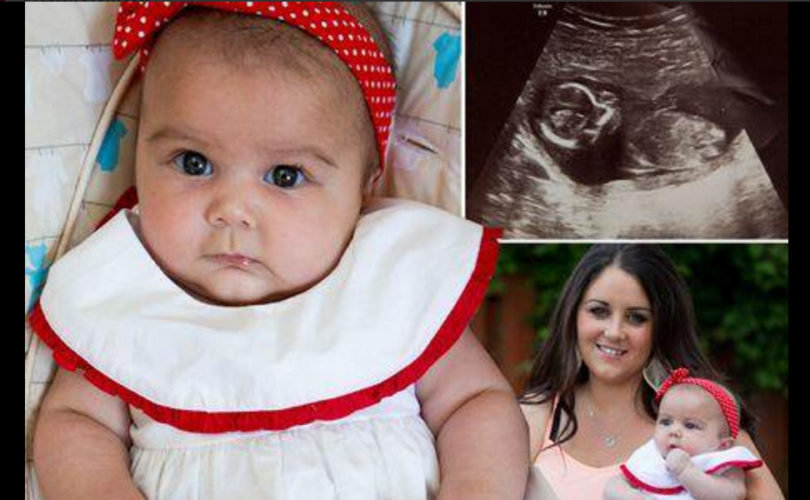 Doctors told Megan's mom that they have never seen a case like it.

By all accounts, Megan Hui shouldn’t be alive.

When her mom, Michelle, was six weeks and two days pregnant she began bleeding, and multiple scans confirmed that she had miscarried.

But what Michelle and her doctors didn’t know was that she was pregnant with twins, and she had only lost one of the babies.

That oversight nearly cost Megan her life, when doctors prescribed mifepristone, a drug that is normally used to cause an abortion, in order to empty out the uterus and ensure that the miscarriage was complete.

Days after taking the drug, however, Michelle took a pregnancy test – not to find out if she was pregnant, something she thought was impossible, but to learn whether any clots had remained behind.

The test came back positive, and so she returned to the Dublin hospital for a final D&C procedure, hoping to finally put the painful experience behind her.

Before doing the procedure, however, doctors performed another scan, and found the last thing they expected to find…a heartbeat.

“It was the best feeling ever!” Michelle told The Mirror in Ireland.

Not only was Michelle still pregnant, but somehow the baby was totally healthy. Little Megan was born in February of this year.

“Now Megan is fine, she’s healthy and she is just a big healthy pudding of a baby. The doctors said it was a blessing. They have never heard of anything like it. Someone had been looking over us,” says Michelle.

She says her case is so rare that it has even been profiled in medical journals.

As for how the doctors could have missed Megan on the various scans, nobody knows for sure. “They said that with all the blood and clots it must have created shadows so they couldn’t see her,” says Michelle. “They said I was blessed.”

Michelle and her husband and their two other children agree.

“She’s our little miracle,” Michelle told mife. “We were always a strong family, but it has just made us stronger. I wouldn’t have been able to get through it all if it had not been for my husband and my two children.”