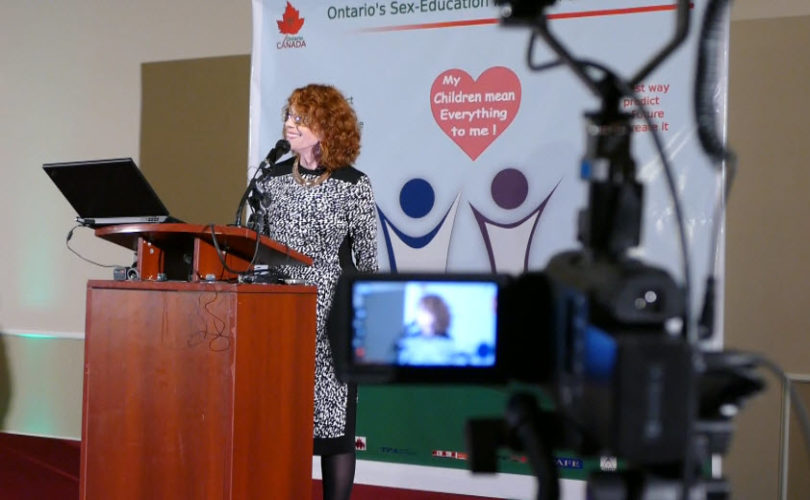 MISSISSAUGA, ON, August 27, 2015 (LifeSiteNews) – Talking to their children about sex is “anxiety provoking to say the least,” for parents, says American sex-ed expert, Dr. Miriam Grossman.

“Some people just can’t even do it, and that’s okay,” the New York-based psychiatrist told the crowd of 1,000 who packed a Mississauga conference hall August 18 to hear her critique of the Ontario Liberal government’s controversial sex-ed curriculum.

After Grossman explained how the Liberal sex-ed curriculum is dangerously flawed and ideologically driven, she used the question-and-answer session to give parents much appreciated and sometimes humorous practical advice on how to teach their children about “the birds and the bees.”

“If you feel you can’t do it, maybe there’s someone else in the family or in the constellation of people that you know you can trust that could do it,” said Grossman, author of “You’re teaching my child WHAT?” and an internationally sought-after speaker on sex education.

A child, adolescent and adult psychiatrist with 12 years’ clinical experience treating students at the University of California, Los Angeles (UCLA) clinic, Grossman said explaining sexuality and procreation to children is “a process,” that “shouldn’t ideally happen all at once. A child is not a miniature adult, and absorbs…new information differently than adults do.”

And parents need to be sure just what their child wants to know.

To illustrate this, Grossman referred to her earlier story about a father who gave his son every detail on human procreation after the boy asked him, “Dad, where do I come from?”

After the father finished, his son replied, “Well, that’s funny, because Johnny told me that he came from Montreal.”

“Try to find out what your child is really getting at, and, don’t give it all at once,” Grossman said. “You start with a little bit at a time…and you know, there’s so many variables here, and people have their own traditions and their own ways of explaining things, and something that might be right for my family might not be right for your family.”

She also advised that, when confronted with a four, five, six or seven-year-old asking about a pregnant woman, or where babies come, a parent can ask, “What a good question that is. What do you think?”

And parents can also legitimately put off the discussion when appropriate, telling the child, “That’s really not something you need to know about right now.”

“Wow, what a novel idea: Telling a child that they could wait until they’re older to discuss that subject,” Grossman said, adding that parents wouldn’t brook a six- or even fifteen-year-old child asking how much money they made or had in the bank. “Excuse me? Not every subject has to be an open book.”

However, the time will come when a child needs to know “about how her body’s going to change, about reproduction, about how a new life is created.”

That time, Grossman advised, is puberty, or “as puberty is beginning,” and this is especially so for girls, who, if unprepared for the surprise onset of menstruation “might think [they’re] dying.”

“The actual nitty-gritty about the birds and the bees and intercourse” can “be told in bits and pieces, or it can be told all at once, if you feel it’s necessary,” she said, adding that it’s beneficial if the parent acknowledges his or her awkwardness, because the child will think: “This must be such an important subject that my mother or my father is sitting there squirming, but he’s doing it anyway. I’m really loved.”

“And the children need to understand that as you grow up, you change a lot, not only physically but emotionally,” Grossman said, “and what may seem odd or disgusting when you’re ten years old, or whatever age, it becomes something very special and beautiful when you’re older and you’ll understand it later. You don’t have to understand it now.”

Know your child and guard your home

But as an essential foundation for this discussion, parents must both know their children and guard their home from the encroachments of a culture that Grossman described as “very, very sexualized” and “really horrible.”

“Children need parents who are loving but are also firm and authoritative,” she asserted.  “They don’t need best friends. They need us to guide them, to know what they’re doing, to be on top of what they’re doing.

So parents need to be aware of whom their child is “hanging around with, and what kind of movies are they watching…what’s going on with your child.”

“You need to know that anyway, even if it’s not about sex education,” she pointed out. “Try and know your child. Every child is different.”

And Grossman emphasized that it is “extremely important to be careful about what your child is exposed to in the home, in terms of television and Internet, obviously.”

Children need to understand that “just like you have garbage you take out of the house, you put it in the garbage bin, it’s dirty, it smells…there are other things that also don’t belong in the house.”

And children learn quickly what is, and is not, permissible inside the home, Grossman said. “Me, I keep kosher…If I go into a store, my kids know from a very young age, we don’t eat that.”

So they are used to the idea of “the world outside and the inside world, of inside your home, and inside your heart as well.”

Parents can also convey this by telling their children that “the world is an upside-down place, and sometimes the most special, holy subjects are…just thrown in the gutter. And that’s a bad thing. In our family, in our tradition, we don’t do that.”

“Sexuality is one of the subjects that in this upside-down world, it is sometimes just in the gutter,” she said. “And so I want you to tell your child to come to me when you have questions, I will give you the straight story about it.”

Grossman urged parents to visit her Facebook page, website and blog. “I have so much information you can get there that you’ll find useful,” and added that she will be publishing books for children, and has posted her critique of New York City’s sex-ed curriculum, which is similar to Ontario’s.

The parental backlash to that sex-ed curriculum, set to roll out in the province’s publicly funded schools this September, has been “amazing” Grossman noted.

Grossman’s seminar was sponsored by Mississauga-based HOWA Voice of Change along with the Canadian Families Alliance, an umbrella group representing more than 25 associations and 200,000 Ontarians opposed to the curriculum. The report on her devastating critique of the sex-ed curriculum can be found here, and the video here.

Ontario readers may find information and sign up for a September 2 province-wide protests at MPPs offices here. So far, there are protests planned for 92 of Ontario’s 107 constituencies. The parents’ movement seeking removal of the curriculum is urging all concerned citizens to join this special effort to influence individual Ontario legislators.