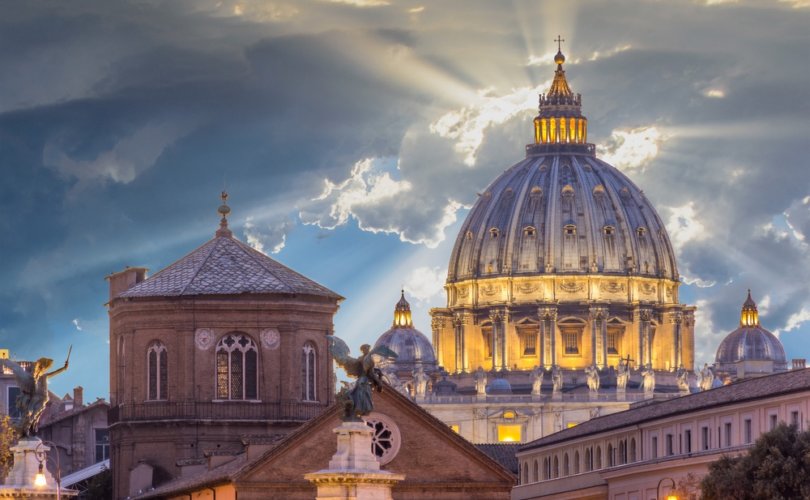 WASHINGTON, DC, April 9, 2018 (LifeSiteNews) – “The most globally reviled and widely misunderstood document of the last half-century — Humanae Vitae — is also the most prophetic and explanatory of our era,” Catholic author Mary Eberstadt told attendees at a conference on the topic of the 1968 encyclical.

“The beauty of Pope Paul VI’s Encyclical, shines forth in a new and continuously illuminating way,” said Eberstadt.  “Humanae Vitae — and the two thousand years of teaching it represents — remains true in ways that all reasonable people can discern, if only they are supplied with the relevant evidence.”

Eberstadt was speaking at The Catholic University of America’s academic symposium commemorating the 50th anniversary of Humanae Vitae, Pope Paul VI’s landmark encyclical.  Attendees came from around the country and as far away as Hong Kong.

Humanae Vitae’s “signature predictions have been ratified as few predictions ever are,” she explained, “in ways that its authors could not possibly have foreseen, including by information which did not exist when the document was written; by scholars and others with no interest whatever in Church teaching, and even inadvertently by proud public adversaries of the Catholic Church.”

“The reasons for the resistance to the teaching are obvious,” said Eberstadt.  “The promise of sex on demand, unencumbered by constraint, may be the strongest collective temptation that humanity has ever encountered. And that’s why, since the invention of the birth control pill, resistance to traditional Christian teaching has been unremittingly ferocious.  It is also why so many in the laity and clergy wish that this rule—among others—were less taxing. As the disciples of Jesus complained upon hearing his teaching about marriage, ‘these lessons are hard.’

“But to confuse ‘hard’ with ‘wrong’ is an elementary error, unworthy even of a layman, let alone a theologian or a philosopher.”

“It is clear beyond a reasonable doubt that the increased use of contraception has also increased abortion,” said Eberstadt. “Fifty years ago, many people of good will defended contraception precisely because they thought it would render abortion obsolete.  But the statistical record since the 1960s shows this commonly held logic to be wrong.”

“During the past several decades, studies have emanated from the social sciences trying to explain what secular wisdom regards as a puzzling fact. Far from preventing abortion and unplanned pregnancies, contraception’s effects ran quite the other way.  Rates of contraception usage, abortion, and out-of-wedlock births all exploded simultaneously.”

Eberstadt said that contraception has led to more abortion because it eroded the idea that men had equal responsibility in case of an unplanned pregnancy.

Contraception, as even many secular economists have explained, “sharply reduced the incentive for men to marry—including marrying their pregnant girlfriends,” and explains why the phrase, ‘shotgun wedding,’ is now antiquarian.

“As a matter of historical fact, the mass use of contraception called forth the demand for more abortion,” because contraceptive use, “invites pregnancies that occur in situations where women do not feel ready to become pregnant.”

“We cannot pretend that fifty years of social science connecting contraception to abortion don’t exist,” said Eberstadt, adding, “It would seem that from now on, anyone inside or outside the Church who advocates expanding the use of contraception, needs also to explain why it is permissible to increase abortion.”

Eberstadt said that many non-Catholic Christians are increasingly valuing Humanae Vitae as prophetic.

“This is one of the least reported religious stories of our time, and has the potential to reconfigure the Christianity of the future, replacing disunity over birth control with a new unity. Observing what the sexual revolution has wrought, more and more Protestant and other non-Catholic voices now question yesterday’s nonchalance about contraception,” she said.

According to Eberstadt, a Mormon doctor conceded ten years ago that Contraception is a “heavy part of the fuel behind the sexual revolution and many of the problems in society we are facing. I think 'Humanae Vitae' is basically a prophetic statement.”

“It is in tradition-minded Africa that Christianity has grown explosively in the years since Humanae Vitae—as opposed to in those nations whose Christian leaders struggle still to change the rulebook,” noted Eberstadt, proving the maxim, “Strict churches are strong.” Concomitantly, “lax churches are weak.”

Contraception has not made women happier

Evidence from social science suggests that female happiness across the United States and Europe has been declining over time, leading to the “growing worry among secular women that marriage has become impossible,” and so, “it is time to go it alone.”

“The technological shock of widespread contraception licensed predation,” said Eberstadt.  “No longer does a man have to be a king or a master of the universe to prey upon women in unrelenting serial fashion.  All he needs is a world in which women are assumed to use contraception—the world we’ve had since Humanae Vitae.  The one that Humanae Vitae foresaw.”

Eberstadt noted how fifty years of contraception has created an epidemic of loneliness.

Five decades into the sexual revolution, “one of the most pressing and growing issues for social science researchers is not overpopulation,” said Eberstadt.  “Properly understood, it is under-population.”

Eberstadt noted reports from around world.  In Japan, where 4,000 elderly die “lonely deaths” each week, “an entire industry has grown up . . . which specializes in cleaning up the apartments where decomposing remains are found.” And in Germany, “One in four Germans over seventy receives a visit less than once a month from friends and acquaintances.  And nearly one in ten is not visited by anyone anymore.”

“This epidemic of loneliness is a new form of human poverty, and it is abounding in societies awash in material wealth,” said Eberstadt.  “It doesn’t take a demographer to connect the dots between the pill and elderly loneliness, any more than it takes a theologian to understand that contraception and abortion are joined at the root.”

The Catholic Church was right

“In this moment of watchfulness inside and outside the Church, a global fellowship that includes more and more non-Catholics, knows the truths of Humanae Vitae and related teachings as truths, however unwanted or hard.  They are the latest pilgrims in a line stretching two thousand years back. They have sacrificed to stand where they do, and they sacrifice still—including by relinquishing the good opinion of a mocking world.”

“The Catholic Church was right to stand as a sign of contradiction to the devastation now surrounding us,” said Eberstadt, noting that accommodating the sexual revolution “has been an epic fail for the churches that have tried it.”

“Mocked and rejected in many places though it may be, [Humanae Vitae] got one of the biggest calls in history right.”