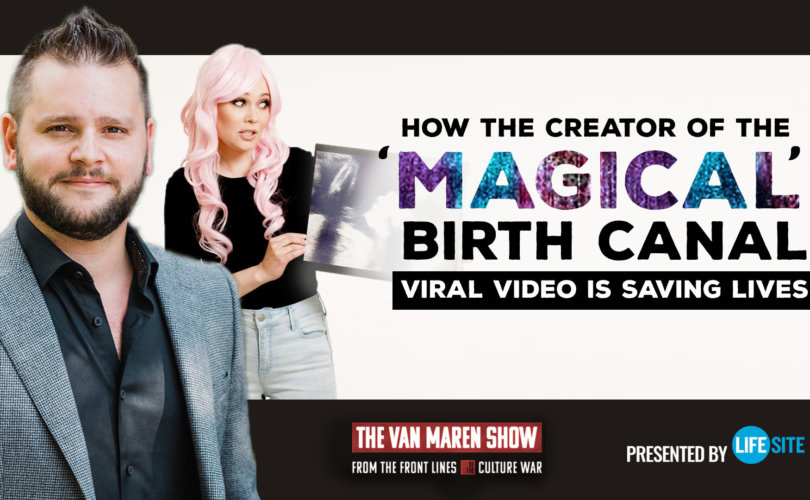 October 16, 2019 (LifeSiteNews) – It’s not every day you see a young woman dressed in a pink wig, even pinker lipstick, and holding a giant, sparkly tube that she informs the viewer is supposed to represent the human birth canal (“Disclaimer: birth canal is not the actual size of a birth canal,” we’re helpfully told).

The woman is Laura Klassen, the founder of CHOICE42, a one-of-a-kind pro-life organization that uses sarcasm, perfect comedic timing, and a healthy dose of truth to create viral pro-life videos designed to force even the most committed pro-choicers re-think their basic presuppositions.

The “Magical Birth Canal” video, which lampoons the notion that babies suddenly gain human rights by passing through their mother’s birth canal, is the most popular of Klassen’s videos – with the English-langauge version racking up over 200,000 views on Youtube alone. Many of her other videos have earned tens of thousands of views, and been translated into multiple languages.

In this interview with Jonathon Van Maren on The Van Maren Show this week, Klassen explains that she remembered seeing a graphic image of an unborn child who had been aborted when she was a young child – and thus was always convicted that abortion was wrong.

Amazingly, however, despite her pro-life convictions, she had no idea that there existed a large, organized pro-life movement until well into her university years. The thing that really motivated her to get involved in fighting abortion in a big way was her experience volunteering in a pro-life crisis pregnancy center.

In particular, Klassen remembers her first-ever encounter with a pregnant woman considering abortion. Despite Klassen’s best efforts, the woman left their conversation determined to abort her child. “I did everything that I'd been told to do,” Klassen remembers thinking. “This should have gone so differently.”

That failure lit a fire in Klassen. Her initial idea was to create a national database of all the pro-life pregnancy centers and other organizations that minister to women in crisis pregnancies. This database remains the core of CHOICE42’s mission.

Klassen, however, had also spent years as a professional opera singer and actor. Soon, she saw the opportunity to put her creative background to work.

As Van Maren notes, Klassen’s video strategy basically amounts to taking the kinds of sarcastic remarks that pro-lifers might make behind closed doors about how awful many pro-choice arguments are, and packages them in such a unique and slick way that it actually provokes thoughtful engagement with the pro-life worldview. Thanks to Klassen’s humorous, but unapologetically caustic delivery, people who may have always accepted pro-choice talking points, suddenly come to see their emptiness.

“There was always a baby recently in the United States where the doctors removed the child from the womb at a very young age, did surgery on the child's back for spine bifida and put them back in the womb,” Van Maren notes in the interview. “Well, based on the pro-abortion worldview both in the U.S. and here, it means that baby would have had no human rights. They took it out. It would've had human rights. Then, back in. No human rights. So the reason I think that [Magical Birth Canaal] video struck a cord is because that's quite literally the argument that they're making. Like you can't make this stuff up.”

Klassen says that the visibility given to her organization by the viral videos has led to women in crisis pregnancies contacting her, and ultimately choosing life. Even more interesting, she said, is that the blunt, non-nonsense language she uses – for instance about “killing babies” – has turned out to be exactly what many women need to hear.

She describes one case when she posted something on social media about a young child telling her mother that abortion “is when a mommy murders her baby or kills her baby.” Shortly thereafter, Klassen got a message from a woman who said she had literally just found out she was pregnant. “I just I pulled out my phone to look for an abortion clinic,” she told Klassen. “I opened it and my Facebook was up. And the first thing I saw was that post. … And I can't, and I can't do it. So thank you for speaking this truth.”

That’s the power of truth, says Klossen. “I'm all about just truth. Like, you can say it lovingly.”

In their wide- ranging interview, Van Maren and Klassen also discuss the failure of Christian churches to take abortion seriously, the creative process she follows in producing new videos, and a host of other topics.

Watch or listen to the complete show here: