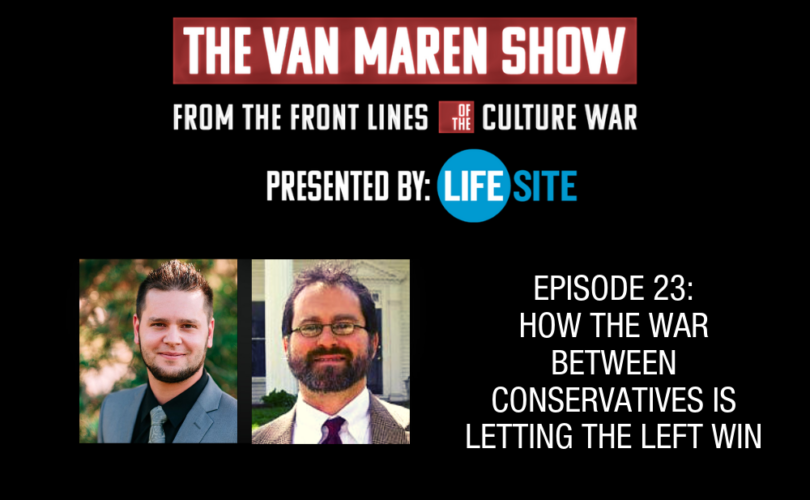 June 26, 2019 (LifeSiteNews.com) – This week on The Van Maren Show, Van Maren gives his listeners a look inside the ongoing conservative civil war, which he says started with the election of President Donald Trump. The show starts off with a brief history of the beginnings of this internal clash before moving to Van Maren’s conversation with John Zmirak.

John Zmirak is the author of The Politically Incorrect Guide to Catholicism. He holds a B.A. from Yale University, an MFA in Screenwriting and Fiction, as well as a Ph.D. in English from Louisiana State University. Zmirak served as the press secretary to pro-life Louisiana Governor Mike Foster. He has had articles appear in First Things, The Weekly Standard, the Atlanta Journal-Constitution, USA Today, The American Conservative, and many others. Zmirak currently writes daily for The Stream, providing insights into the current culture wars.

Zmirak kicks off the conversation with Van Maren by sharing what he sees as the official battle, as well as what’s sitting on the surface. The first half of their discussion is separating the two camps into those who agree with the principles of Sohrab Ahmari or David French. Zmirak has especially unique opinions on this divide because he lands somewhere in the middle. He jokes that he is a “pox on both their houses.”

Naturally, he shares his opinion on President Trump and his administration, and just how the current administration has played a role in creating this divide between conservatives. “So we Christians have more influence at the White House than we have had since 1980,” Zmirak says after contrasting former President Bush and Trump and their efforts in the pro-life movement.

As Van Maren brings the show to a close, he asks Zmirak what the government can do to ensure that Christians maintain more liberty and safety in the decades to come. Zmirak answers quickly and simply, “Well, first of all, we need to fix immigration. Nothing we do now matters at all if one state or another flip from red to blue because of immigration.” He goes on to say, “Immigration determines whether America will be saved. Abortion determines whether it deserves to be saved.”

Van Maren’s final question is about what the next four to eight years look like to Zmirak. He shares, “If Trump gets re-elected and fixes the immigration problem, we will see a realignment and rebirth of conservative principles in America.” He says we’ll continue to fight against Google and Facebook.

Catholics and Protestants should both take a look at John Zmirak’s book, The Politically Incorrect Guide to Catholicism, which separates rumor from the truth about Catholic traditions, faith, and controversial leaders.

To stay up to date with what’s happening in the culture wars, don’t forget to include John Zmirak and LifeSiteNews (if you don’t already!) in your daily or weekly reading.