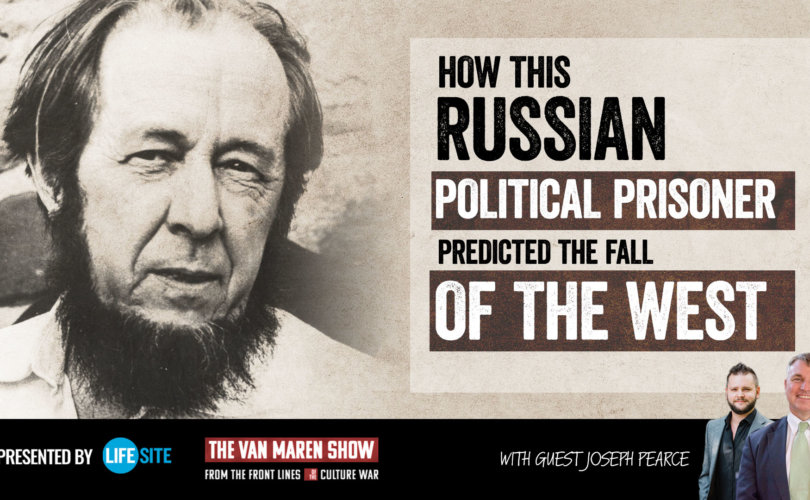 February 12, 2020 (LifeSiteNews) – Aleksandr Isayevich Solzhenitsyn was a renowned Russian novelist, political prisoner, historian, and philosopher. Jonathon Van Maren calls him one of the greatest authors of the 20th century. Solzhenitsyn is well-known for his work detailing his time as a political prisoner and exposing the inner workings of the Russian political machine, the Secret Police, and much more.

Solzhenitsyn died in 2008, but his wisdom and experience can provide guidance to all of us as we navigate the morphing of governments around the world into bodies that increasingly resemble communism.

In today’s episode of The Van Maren Show, Jonathon Van Maren speaks with Joseph Pearce, a man who became quite close to Solzhenitsyn as he wrote his biography. Pearce shares his stories of Solzhenitsyn and his wisdom that may help save society.

Pope St. John Paul II, Ronald Reagan, and Margaret Thatcher may have been the political giants who helped to take down communism, but Pearce argues that Solzhenitsyn was responsible for helping people all across the West and the Soviet Union understand the ethical and moral issues with communism.

In his youth, Solzhenitsyn was a faithful member of the Soviet Union. That changed with his arrest for “criticizing” Stalin, quite mildly, in “private” correspondence to a friend. His arrest and being sent to the Gulag Archipelago, a forced labor prison camp, gave him an inside look at the Soviet Union. His experiences made him one of the strongest opponents of the Soviet Union.

Solzhenitsyn sees his arrest and a few other moments of suffering in his life as major points of conversion. Another big conversion experience happened during his time in the gulag when he was diagnosed with what was believed to be terminal cancer. This triggered his conversion to Russian Orthodoxy from atheism.

After being released from the gulag after seven years of hard labor, Solzhenitsyn wrote The Gulag Archipelago and won a Nobel Peace Prize. His writings were so successful at exposing the evils of communism that they were banned in Russia and he became the target of a KGB assassination attempt. He miraculously survived being poisoned by the same toxins that the KGB used to successfully kill other dissenters and was exiled from Russia in 1974.

Van Maren and Pearce explore how Solzhenitsyn’s work and philosophy can be applied today.

“We are actually living in tyrannical times. It is basically impossible now for someone who believes what humanity always believed about humanity to actually have a position in a secular university or college. They will be fired,” Pearce tells Van Maren.

The “lip service” that society now expects people to pay to the LGBT cause, pro-abortion activists, and anti-religion advocates shares many similarities with Soviet communism. And the similarities don’t end at universities and in relation to speech, but are permeating all areas of society as citizens are told we must affirm that men can “get pregnant” or a woman can “have a penis.”

Pearce and Van Maren both point to Solzhenitsyn as a source of strength and inspiration for those who want to fight back against this insane tyranny. Solzhenitsyn didn’t allow the forceful hand of Big Brother to crush and break him as it had so many others, but instead fought back and became stronger because of his time in prison. Pearce calls on Westerners to wake up to the tyranny of the LGBT agenda, to start fighting it, and to regain the courage we have lost.

Listen to the entire interview:

Pearce points to the loss of courage in the West in highlighting the disparate responses of the French and the Russians to desecration of a sacred space. A group of activist women stripped down in both Notre Dame in Paris and in a Russian church. In Paris, nothing was done to these women; Mass-goers had to endure their display. In Russia, this same group was jailed for their blasphemous actions.

Pearce does provide some hope, however, in highlighting that the even Solzhenitsyn recognized the Soviet Union had to fall. So too, Pearce sees the LGBT movement as something that will self-destruct eventually. It is just “unsustainable.”

Pearce encourages Van Maren and listeners to be holy, to be witnesses to the truth of Christianity, and to be courageous. Pearce also tells listeners to read One Day in the Life of Ivan Denisovich, a novella of one day in a labor camp. He sees this as an inspiring novella that can encourage people to recognize the great strength of the human spirit.

Finally, Pearce shares his experiences with Solzhenitsyn while he was writing the latter’s biography. Pearce emphasizes his surprise in learning of Solzhenitsyn’s great humor and contagious chuckle.

“He had very striking china-blue eyes. And the thing about them was on the surface they seemed very youthful, almost mischievous, that chuckle seemed to be there on the surface. But if you held the gaze you saw the depths and depths of suffering, and the knowledge and wisdom in there,” Pearce tells Van Maren.

To receive weekly emails when a new episode is uploaded, sign-up here: