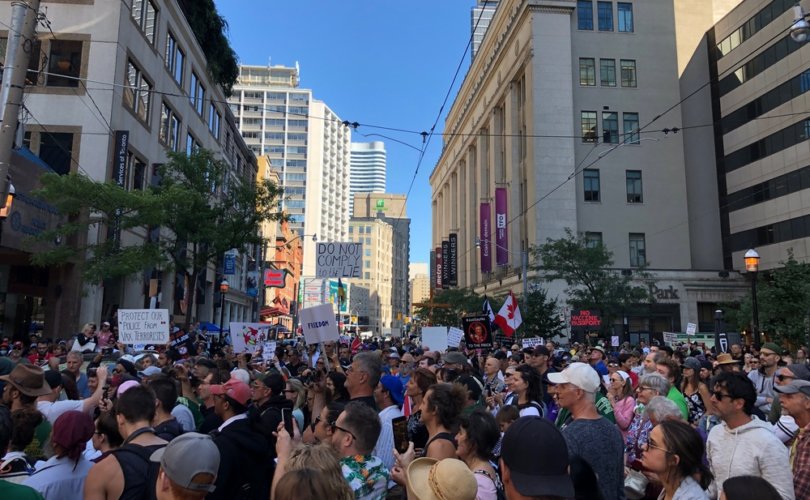 TORONTO, Ontario (LifeSiteNews) –  On Thursday September 2, in a show of “united non-compliance,” hundreds of police officers and citizens held a rally in front of Toronto Police Service Headquarters in downtown Toronto, to protest against vaccine passports and mandates.

“Look at this crowd today,” Chris Sky – one of the de facto leaders in Canada’s opposition to dictatorial COVID measures – told the cheering crowd.

“We have the people, aligned with the police, against the draconian government, and what do we call that everybody?” Sky asked.

LifeSiteNews attended the rally and has exclusive photo and video coverage of the massive turnout of freedom fighting police officers and citizens.

“Father God, we thank you for fighting our battles for us, amen” reads another.

In a display of faith, one of the rally members held a 5-6-foot-tall crucifix above the crowd, and many others displayed similarly sized crosses as icons of faith and hope for all those in attendance.

Talking about the government’s continued plan to dismantle the rights of Canadians, which includes Premier Doug Ford’s installation of a vaccine passport system in Ontario, Sky outlined the timeline of events from his perspective, referencing public statements he has made.

“[18-months ago] the mere words ‘vaccine passport’ made me a ‘crazy conspiracy theorist’,” said Sky.

“Now that it’s here, even six weeks ago [when] Doug Ford said we’re not gonna do a vaccine passport, I told you all that’s called ‘pacification followed by predictive programming’,” he added.

Sky went on to tell the crowd that he predicted the call for a rushed election, and that he sees this election as a tool to distract the public.

Referencing the dictatorial COVID-19 measures implemented by Ontario Conservative Premier Doug Ford, Sky told the crowd that it does not matter whether it is a liberal or conservative government, because these measures are being implemented by both sides.

“There is no political solution to this problem, they want us arguing about our favorite politician while they slip the vaccine passport in the backdoor,” he said.

Sky told the crowd that many businesses have started to publicly oppose these mandates, with business owners across the country vowing to refuse enforcing the passport measures forced on them.

“Do you see where compliance leads you?” Do you really need to comply any longer to see where it’s going to keep leading you?” Sky asked the crowd, illustrating how without resistance, the measures have continued tightening.

Sky, who has been one of those at the forefront of the freedom movement in Canada, told the crowd of the consequences he has faced for refusing to mask, refusing to be tested, and for holding rallies across the country encouraging people to do the same, in an effort to put an end to these measures.

“I’ve been arrested over a dozen times, I’ve accumulated over $100 thousand dollars in fines, and legal fees close to that. I’m currently on six separate bails, each one of them with their own conditions, including things like not being able to drive, not being able to fly, having my house raided and all my legally owned firearms taken,” he stated.

In response, the crowd started chanting “Just say no!” which was the phrase Sky developed at the beginning of the COVID-19 measures, to encourage Canadians to resist the measures from becoming “the new normal.”

“It works! And that’s all we have to do!” Sky shouted in response to hearing his chant.

Also in attendance was constitutional rights attorney Rocco Galati, who is currently suing the federal government, the British Columbia provincial government, as well as Trudeau and government public health officials, over the imposition of these illegal COVID-19 measures.

“It’s a very simple fight; It’s about who controls your body, your mind, and your will, you, or the friggin state,” exclaimed Galati.

Referring to the “Genetic Non-Discrimination Act” Galati reminded the crowd that under Canadian federal law, forcing someone to take a “PCR test or any other COVID-19 test” is a criminal offence punishable by 5 years in prison.

“There is no magic wand,” said Galati, “the only thing that’s going to get us out of this tyranny is if every individual ensures their liberties.”

“You can’t sit at home and expect somebody else to do it for you, everybody’s got to do it for themselves,” he continued.

Quoting Bruce Springsteen, Galati concluded his address to the crowd, “No retreat, no surrender.”