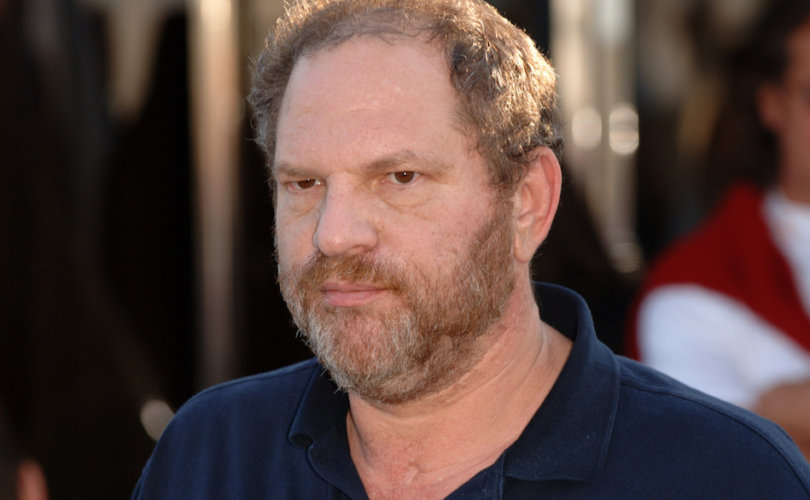 December 6, 2017 (LifeSiteNews)  – A massive New York Times report details the “network” of journalists and Hollywood elites who knew about and helped cover up Harvey Weinstein’s sexual harassment of scores of women.

Weinstein quietly settled sexual misconduct lawsuits with disgruntled women. He also had journalist friends dig up dirt on his victims to discredit them. Agents told actresses Weinstein harassed to keep quiet lest they damage their careers.

Weinstein regularly threatened those who might expose him, saying things like “You know what I can do,” and “I am a man who has great resources.”

He threatened an assistant with “personal information” he “somehow knew” about her and her family. He fired those who complained about having to bring unsuspecting women to his hotel rooms for meetings.

Other assistants displayed a “chilling detachment” with which they helped Weinstein manipulate his victims, the report says.

“Mr. Weinstein held off press scrutiny with a mix of threats and enticements, drawing reporters close with the lure of access to stars, directors and celebrity-packed parties,” the New York Times reported. “Some journalists negotiated book and movie deals with him even as they were assigned to cover him.”

“Minutes before” the New York Times published its first report on Weinstein, which sparked the downfall of a number of media and political elites over their covered-up sexual harassment and assaults, “he called the reporters who wrote it.”

“Swinging between flattery and threats, he said that he had ways of knowing who had cooperated with the investigation and the means to undermine it,” the New York Times revealed.

The report also noted that Hollywood is run by men who can easily abuse their power to sexually coerce and silence women.

According to the report, Weinstein touted his close relationships with then-President Obama and Hillary Clinton. He routinely helped his friends, like Amazon head Jeff Bezos, when they faced media scrutiny, too.

Two days later, Jeff Bezos, founder and chief executive of Amazon, interrupted a vacation in Hawaii to field advice from Mr. Weinstein, according to the emails. The Wall Street Journal was reporting on turmoil at Amazon Studios, one of Mr. Weinstein’s business partners. He recommended an aggressive response that involved hiring some of his own team, including a libel lawyer who “makes sure everyone sticks to the right narrative,” Mr. Weinstein wrote. He added, “I’m happy to coordinate with whoever you’d like, as a friend of the court.” Mr. Bezos declined to comment.

The report alleges Weinstein hired a PR manager to keep quiet the affair that eventually became his second marriage and used business opportunities to manipulate media trying to report on him.

He “struck a deal” with American Media, the company that owns the National Enquirer. That company is “known to sometimes help out allies in trouble with a strategy known in tabloid newsrooms as ‘catch and kill’ — acquiring exclusive rights to damaging stories and then not publishing them,” the Times noted.

“Mr. Weinstein’s political activity” on behalf of Clinton and Obama “boosted his image as a man with friends in high places and close ties to the country’s leading female politician. It is not clear if rumors of his record of sexual misconduct had ever reached them.”

Weinstein was working on a documentary about Clinton until the allegations came to light.

He pledged a $100,000 donation to abortion giant Planned Parenthood in May. The abortion company denies that Weinstein ever fulfilled that pledge.

It was apparently also an open secret that another liberal media figure, NBC host Matt Lauer, was a sexual menace.

Brian Flood at Fox News wrote, “if anyone doubts that New York’s media elite was aware of Lauer’s reputation, they should look no further than a top-secret ‘roast’ of Lauer that took place in October 2008.”

Last week, NBC’s own Joe Scarborough, who attended the roast but said he left early, feeling uncomfortable, brought it up on “Morning Joe.” Lauer’s peccadillos, he said, were not just known about. At the roast, they were celebrated.

TIME named its 2017 person of the year “the silence breakers” who have spoken out about sexual harassment.

Some commentators have noted that ironically, the very media that accused Vice President Pence of sexism for taking care to never give the appearance of impropriety with women is now being exposed as filled with predatory, misogynistic men like Lauer and Weinstein.

And, according to these reports, they all knew it.