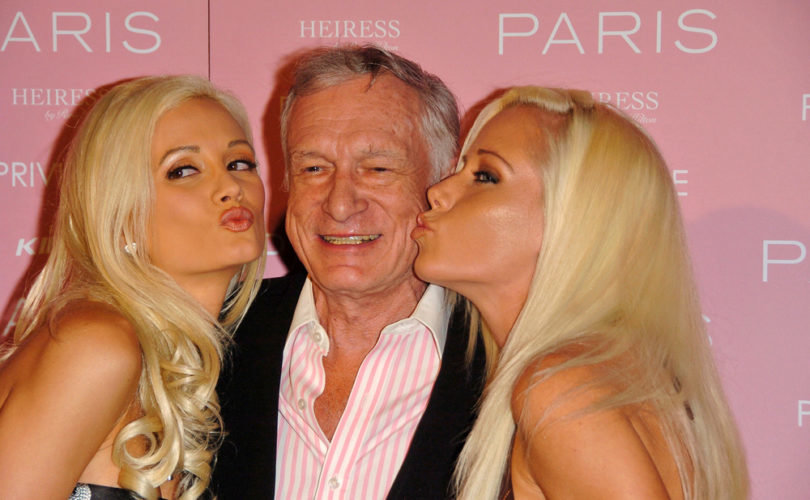 LOS ANGELES, California, July 12, 2016 (LifeSiteNews) — The 90-year-old, pajama-and-silk-gownie-clad Godfather of the Sexual Revolution has proclaimed societal victory via what he says is the complete surrender of the Grand Old Party.

Hefner’s essay, titled “The Conservative Sex Movement,” states that proof of the defeat of conservative mores is the success of the Republican Party's nominee-in-waiting, Donald Trump, over conservative Sen. Ted Cruz.

“This year, no candidate beat the drum of sexual repression longer and louder than Ted Cruz,” Hefner wrote, noting that Sen. Cruz “proposed bans on IUDs and other forms of birth control he refers to as 'abortion-inducing drugs' … opposed abortion even in cases of rape or incest, proposed an amendment banning same-sex marriage, promoted anti-LGBT legislation” and fought for defunding Planned Parenthood.

Hefner decried Cruz's “pandering to America’s fanatical religious minority,” and “stepping on our sexual freedoms to reach the White House.”

Hefner expressed satisfaction that Cruz, and his “Christian crusade to eliminate all sexual activity that doesn’t lead to procreation,” was beaten by a man synonymous with licentiousness.

“Instead, voters nominated Donald Trump, a thrice-married New York entrepreneur who once owned the Miss USA pageant, over Cruz, the son of a pastor,” Hefner wrote.  “It’s a sign of the massive changes in the 'family values party' and proof of … a sexual revolution in the Republican Party.”

Trump famously appeared on the front page of Playboy magazine in March of 1990. That cover is currently framed and on the wall of Trump's office at one of his hotels in New York.

In 1953, Hefner launched Playboy. Its circulation peaked in 1971 at seven million.  In the early seventies, he also ran 23 Playboy Clubs.

In 1985, Hefner suffered a stroke and he turned over running his Playboy Empire to his daughter, Christie. In 1988, the last Playboy club closed. In January of this year, the magazine published its first non-nude issue, having been pushed out of business by the now-readily accessible myriad of pornography sites online.

In an interview with the New York Post, Hefner admitted that he has become desensitized to seeing women naked.

In his editorial, Hefner listed areas where the Republican Party has capitulated to his “sex-positive” agenda, claiming that a majority are pro-abortion, consider men and women “free to have sex without any interest in getting married,” and approve of homosexuality.

“At this year’s Republican National Convention, a powerful and organized group of some of the party’s biggest financiers, calling themselves the American Unity Fund, plans to push the party to embrace same-sex marriage in the official Republican platform — a far cry from the previous platform, which described gay marriage as 'an assault on the foundations of our society.'”

“After losing two presidential elections, core conservatives realize the time has come for the party to … give up a losing war to suppress our sexual rights,” said Hefner.

“We won the sexual revolution,” he declared. “It has just taken Republicans 50 years to admit defeat.”

Gallagher answered her own question. “Millions of children slaughtered in the womb, millions more abandoned by their fathers; women facing the unfair burdens of parenting alone. Men denied the dignity of becoming husbands and fathers. A society sharing the high costs in crime, delinquency, substance abuse, education failure, and poverty.

“Thanks a lot, Hugh Hefner. Just another one percenter boasting of his personal gain.”

Fr. Peter West, formerly of Priests for Life and Human Life International, commented to Prezi, “If anyone has been waging a ‘war on sex,’ it is Hugh Hefner and other pornographers like him who have objectified the bodies of women and have taken a beautiful act — one that God created to be an expression of total, self-giving love and to transmit new human life — and cheapened and reduced it to the mere satisfaction of a bodily appetite.”

“The ‘hard-won sexual liberation’ he speaks of has come at the cost of over 53 million dead from abortion, an explosion of sexually transmitted diseases, millions of broken relationships, and millions of hollow, immature men who are incapable of mature and faithful relationships.”

The pro-life activist priest lamented, “The effects can still be seen today through pornography, sexual scenes on television and in movies and sex appeal in advertisements and relationships being focused more on sex than anything.

But Hefner rallied sexual revolutionaries to “remain vigilant.” “Not all conservatives are willing to recognize that they have lost the war over our sexual rights,” he said.

“These are the final skirmishes of a retreating army of self-appointed moral authorities who have been defeated again and again for the past five decades.”