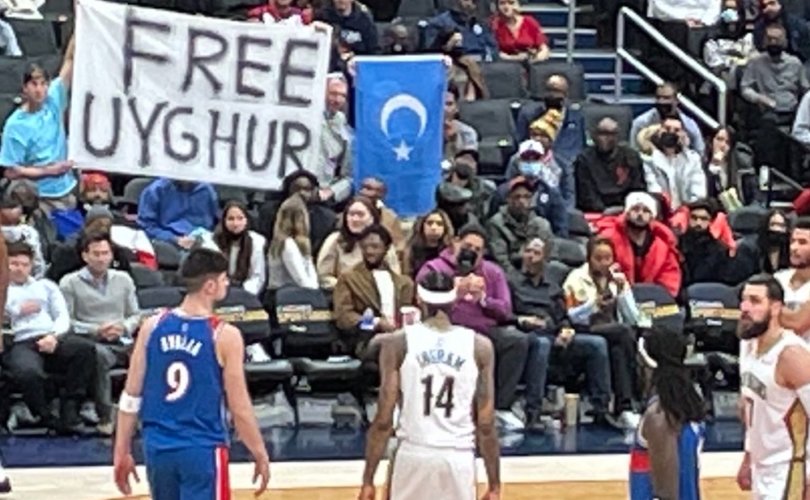 In an exclusive interview with LifeSiteNews, human rights activist and pro-life film producer Jason Jones, who was among Monday’s demonstrators, said he was inspired by NBA player Enes Kanter’s protest of Uyghur human rights abuses by China. Kanter expresses his opposition through shoe-inscribed messages such as “Free Uyghur,” “Free China,” and “Stop Genocide, Torture, Rape, Slave Labor,” a reference to the different kinds of atrocities committed by Chinese government recruits against Uyghurs in slave labor camps.

Kanter plays for the Boston Celtics, so “China’s response to this was to ban the Celtics from China,” said Jones. “So that gave me a great idea: let’s just troll China and NBA stadiums across the country with huge banners that say ‘Free the Uyghur,’ forcing them to cut the broadcast.”

The American Spectator noted that “broadcasts of the Boston Celtics game have been scrubbed from Chinese channels” because of Kanter’s messaging in support of targeted minorities in China. “Live feeds are cut and ticketholders are ejected for showing any apparel or messaging that could insult the Chinese Communist Party,” the Spectator reported.

Jones said that the news outlet has also reported that Kanter’s messaging and Jones’ organized peaceful protests “have cost the NBA $200 million already” because of canceled broadcasts.

“That’s exactly our goal. Our goal is to inspire — and I want to give Enes Kanter all the credit — we want folks to wear ‘Free the Uyghur’ shirts, ‘Free Hong Kong’ shirts, ‘Free Tibet’ shirts, and carry banners, forcing China to cut the broadcasts and then to bring attention in China and around the world to the plight of the Uyghurs,” said Jones.

Jones told LifeSiteNews that his organization brought Tibetans and Uyghur activists to the “nosebleed” section of Monday’s game protest “with huge banners and flags so people all over the stadium could see” their “Free Uyghur” sign and flags of the Uyghur homeland East Turkestan. They also brought a group positioned in the VIP section on the floor to hold up another large “Free Uyghur” sign.

“And of course then the police and the security asked us to leave,” Jones said. This was despite the fact that the protestors were not causing a disturbance, but merely holding signs for a cause, as many NBA game-goers have for years.

He later added that “what’s exciting” is that “the fans are always on our side, 100% percent.” He gave the example of a man selling Budweiser beer at Monday’s game, who exclaimed as they were being thrown out, “Why are you kicking them out, for telling the truth?”

They caught the moment on video:

Salih Hudayar, the current prime minister of East Turkestan in Exile, was among those kicked out of the arena. Hudayar called their removal an “attempt by the NBA to appease China.”

Jones criticized the double-speak of the NBA, saying “The NBA said they want to encourage people to express their views, but it seems like so long as those views don’t upset China. 10% of the NBA’s income comes from China. And it’s growing.”

Jones is especially inspired to start a movement to “fill” the stadiums with “Free the Uyghur” signs because of its practical impact, and its potential for a massive ripple effect.

“We can force Nike, and China, and Apple, and Coca Cola, and Costco, and all these other companies that have benefited from Uyghur forced labor, to break their ties with China. We can do this, but it’s up to the fans. It’s up to us as consumers,” Jones told LifeSiteNews.

“All of us really are culpable. We have all benefited from Uygur forced labor. And once we know, we really have to speak up. If we don’t as fans stand with Enes Kanter, [he] will be canceled.”

Adding to the NBA’s own compromised position is their partnership with Nike, which itself has partners that have produced their shoes using forced Uyghur labor. This has prompted Kanter to don, among his protest shoes, sneakers that read, “Hypocrite Nike – Made with slave labor.”

Jones says that just as the “mission” of his Vulnerable People Project “is to turn stumbling blocks into stepping stones,” he sees the scandals presented by the NBA and Nike’s ties to China, the upcoming Beijing Olympics, and even Pope Francis’s silence on Chinese genocide as opportunities to alert the world to the Uyghur genocide.

“A stumbling block of Nike and Coca Cola and the NBA being in cahoots with the Chinese Communist Party is actually a stepping stone for us to inform the world,” said Jones.

Jones hopes that bringing attention at NBA games to the Uyghur atrocities will help spark a boycott of the Beijing Olympics, which he pointed out is “a great opportunity to inform the world on this genocide.”

Jones calls it “the greatest genocide of the 21st century,” as well as a “silent genocide.”

“And that’s because the crimes are unthinkable. Forced rape, forced labor, organ harvesting. And so it’s so unspeakably and unthinkably evil that people have a hard time wrapping their mind around it,” he continued.

“There are issues that are like and commensurate to abortion, and genocide is one of them,” said Jones, noting that both issues concern those “who have no one else to defend them,” and therefore don’t come with thanks.

“And you’ll never be thanked. We need to continue to lead the way in speaking up for the Uyghurs.”