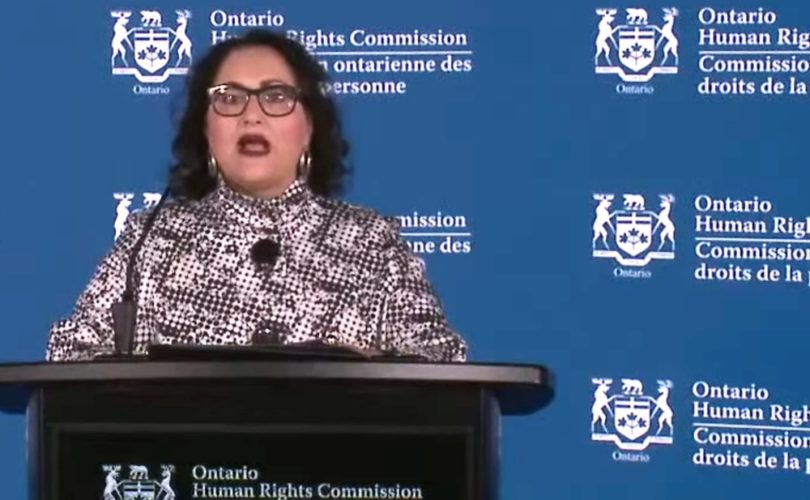 BURLINGTON, Ontario, June 3, 2021 (LifeSiteNews) — The Ontario Human Rights Commission is warning a Catholic school board that it may face legal repercussions for its “failure” to fly the pro-homosexual rainbow “Pride” flag during the month of June, saying that the board may be in “violation of the rights of people who are LGBTQ2+.”

“The Ontario Human Rights Commission (OHRC) is aware of the Halton Catholic District School Board’s (HCDSB) recent refusal to adopt a motion directing its schools to raise the Pride flag during the month of June,” wrote Chief Commissioner Ena Chadha in a June 1 letter to the Catholic school board.

“The HCDSB’s refusal to accept this simple request — and the debate surrounding it — risks further stigmatizing LGBTQ2+ members of the Board’s community, many of whom may already feel stigmatized or excluded,” the letter continued.

“Also, the Human Rights Tribunal of Ontario has recognized that an organization’s failure to symbolically acknowledge Pride events can in some cases amount to a violation of the rights of people who are LGBTQ2+ to equal treatment in services under the Code,” the letter added.

In April, trustees at the HCDSB decided not to fly the gay “Pride” flag, voting instead that all school staff must undergo “mandatory training” about LGBT students, schools must “raise awareness around Pride month,” and schools must post pro-LGBT signage “to ensure that students in the 2SLGBT community are supported throughout the entire school year.” A number of other Catholic boards, however, decided to fly the flags, including the Catholic boards of Eastern Ontario, Dufferin Peel, Simcoe Muskoka, Durham, Niagara, Ottawa, Toronto, Thunder Bay, and Wellington.

The “Pride” flag has become an international symbol of sexual lifestyles and choices that the Catholic Church teaches are immoral and contrary to the laws of God. Basing itself on the Bible, the Church specifically teaches that homosexual acts are “intrinsically disordered” and that the homosexual inclination is “objectively disordered.” While the Church holds that God does not make anyone “gay” and that same-sex attraction constitutes for most “a trial,” the Church teaches that those who struggle with such attraction “must be accepted with respect, compassion, and sensitivity.”

“No-one should be fooled by the softer ‘I urge you to reconsider’ language used by the Head Commissioner of the Human Rights Commission of Ontario in her letter to the Chair of the Board. Although disguised poorly, this is purely and simply a form of intimidation and an abusive and improper use of the Commission’s authority,” he said.

“It’s beyond the legal powers (ultra vires) of the Human Rights Commission to even attempt to influence Catholic trustees to vote on a denominational matter in such a way that would cause the Board to commit a breach of its fiduciary duties to the only people who are the beneficiaries of those fiduciary duties — people like me — the Catholic Electors who want the Board to fulfill its ‘constitutionally protected mandate,’” he continued.

“I suspect that, since the Commissioner is a lawyer, she ‘knows better’ or at least ought to know better, but this would assume that there is at least one lawyer who works for the Commission who has made the effort to read the relevant Section 93 [Section 93 of the Constitution Act, 1867] jurisprudence, and educate themselves on what the word ‘Magisterium’ means.  Sadly, this is a huge assumption,” he added.

Cauchi pointed out that the constitutionally protected mandate of the Ontario separate school board is to transmit the Magisterial teachings of the Catholic Church to its students. He noted that Section 93 of the 1867 Constitution Act explicitly guarantees Catholics in Ontario the right to have a publicly funded separate denominational school system where Catholic children are taught the fullness of the Catholic faith without government interference. Cauchi also noted that this fact was reaffirmed by the Ontario Court of Appeal in the 1999 case of Daly v. Ontario (A.G.).

“Because of this, and given both constitutional limitations in Section 93 and the statutory re-statements of them in section 19 of the Code, I doubt very much that the Head Commissioner could point to any legal and constitutional basis for attempting to influence a decision of a Catholic Trustee on any denominational issue,” he said.

“If the Code explicitly purported to give the Human Rights Commission of Ontario the power and authority to direct a Catholic Board to do anything that contradicted a Magisterial teaching, any such provision would be null and void,” he added.

Parents as First Educators president Teresa Pierre, Ph.D., told LifeSiteNews that Catholic schools have “every right to preserve their denominational nature by refusing to fly the Pride flag.”

She agreed with lawyer Cauchi that the OHRC is beyond its powers in “trying to force Catholic school boards to fly the rainbow symbol.”

Pierre pointed to legal precedent on this matter from Canada’s top court.

“The Supreme Court of Canada has recognized in Ontario English Catholic Teachers’ Assn. v. Ontario (Attorney General) that section 93 is ‘absolute in its protection of denominational education rights, and legislation has been held to be ‘ultra vires’ which interferes with those rights.’”

19.  (1)  This Act shall not be construed to adversely affect any right or privilege respecting separate schools enjoyed by separate school boards or their supporters under the Constitution Act, 1867 and the Education Act. R.S.O. 1990, c. H.19, s. 19 (1).

Pierre said that the Commissioner’s letter makes it clear that the OHRC is “trying to bully Catholic school boards to give up their denominational rights.”

Jack Fonseca of Campaign Life Coalition told LifeSiteNews that Commissioner Chadha’s letter to the board simply reveals her “humiliating lack of knowledge about the Ontario Human Rights Code” in her attempt to “erase the inalienable human right of religious freedom that all Canadians possess.”

Fonseca called for the Commissioner to be removed from her post by Premier Doug Ford over her “clear lack of knowledge about the Ontario Human Rights Code.”

“How is it possible that she doesn’t know that Section 19 of the Code exempts Catholic school boards in Ontario from having to comply with regulations, policies, and laws that contradict the content of faith and morals? Either it’s because of ignorance and incompetence, or it’s because of anti-Catholic hate. Pick one of those two, or both. Either way, she should be run out of the OHRC for this,” he said.

Fonseca also pointed out that the Commissioner seems “completely ignorant” that Section 230 of the Education Act makes it clear that the Act is not permitted to “interfere with or control the denominations aspects of a Roman Catholic board.”

“In fact, somebody needs to show the Commissioner Section 264 of the Education Act which states that the duties of a teacher include ‘to inculcate by precept and example respect for religion and the principles of Judaeo-Christian morality.’ Clearly, Section 264 contradicts her claim that Catholic schools are obligated to fly a gay Pride flag which contradicts Catholic moral teaching,” he said.

Fonseca called on Catholic school board trustees to ignore the Commissioner’s letter.

“Trustees need to tell this bully to get out of their faces and take her anti-Catholicism with her. Trustees have no obligation to obey any of her unconstitutional, dictatorial commands,” he said.

“However, this episode does highlight the fact that we really need a new campaign to abolish this disgraceful OHRC kangaroo court once and for all. The hate campaign against Catholics needs to stop,” he added.

June 4, 2021 update: This report now contains updated comments from Geoff Cauchi. It also includes that the lawyer is based just outside of Toronto in Mississauga, not in Toronto itself, as the original report stated.