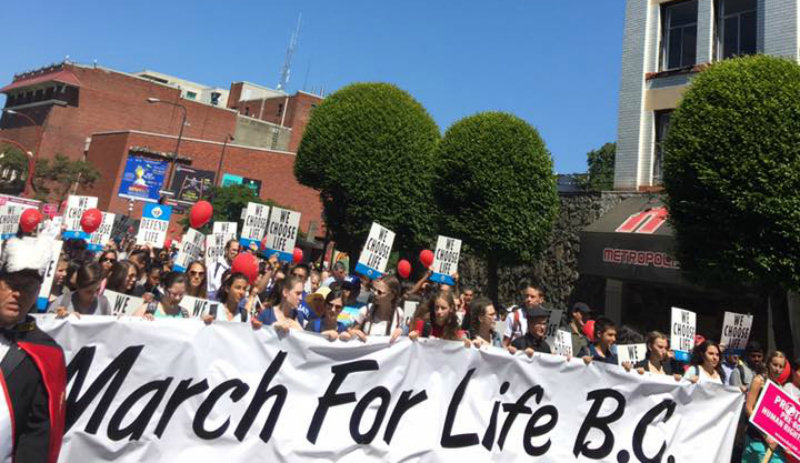 VICTORIA, May 13, 2016 (LifeSiteNews) – Marchers assembled in British Columbia’s capital for the annual March for Life Thursday were called on all sides to political action, but the most poignant call came from Victoria’s Bishop Gary Gordon, “to express the glory of the Father” by “caring for people in their vulnerability and weakness.”

Bishop Gordon eloquently described to 800-plus Marchers crowded into St. Andrew’s Cathedral how “the best thing I ever did in my life and the best thing I ever will do” was taking care of his ailing father. And now, he added, he had promised a friend from seminary dying of cancer he would “drop everything” and go to his side when death was near.

Bishop Gordon’s powerful message was that if political action failed to deter the Canadian government from passing doctor-assisted death into law with Bill C-14, Christians were presented “an amazing opportunity” to prevent ailing and vulnerable Canadians from choosing euthanasia or assisted suicide by showing each one them “the mercy of Jesus Christ.”

The same message came later when more than 2,000 Marchers strode through Victoria’s downtown, past the scenic Inner Harbour and the majestic Empress Hotel, to the copper-domed Legislature. It was delivered by two pro-life MLAs, Laurie Throness, of Chilliwack-Hope, and Marc Dalton of Maple Ridge-Mission. Both of them promised to work for British Columbia laws that “protect the weak, protect persons with disabilities, protect medical professionals” who want no part of killing people, as well as to ensure that palliative care is not only improved “but available to every British Columbian that wants it.”

Speakers at the Legislature included advocates for Cassie and Molly’s Law and others who spoke against Bill C-14, calling for the audience of mostly young people to write or email their MPs in support of the first and against the second.

Emcee Pavel Reid of the Vancouver Archdiocese established the theme at the outset, leading the crowd in chanting “Caring not Killing,” at the MLAs within the building behind him. But there are MLAs who are for life, he added. “Support them when you vote, when you donate and when you volunteer.”

Anglican Church in North America Bishop Trevor Walters led the assemblage in prayer and then told of  ministering through Rachel’s Vinyard with post-abortive women who told him, “On the day I had the abortion, something died inside me, and ever since I’ve been trying to fill up the hole with drugs, alcohol or serial relationships.”

Joining many Catholic clergy were three ANIC Anglican priests carrying signs proclaiming themselves Anglicans for Life, Fathers Richard Roberts, Bill Klock and Peter Umland, and a Chinese Canadian, Ukrainian Catholic priest named Richard Soo. “I am here to stand up for life,” he told LifeSite. “We are not only killing our children, we are killing our oldest and most vulnerable.”

Catholic teenagers came from Vancouver College, St. Jean Brebeuf and Notre Dame high schools in Vancouver by the busload, many of them Asian Canadians. Thry were joined by tall blond youths from several denominations of the Reformed churches in Chilliwack and from Mt. Cheam Christian School, along with their parents and baby sisters and brothers in their arms. From Duncan Christian School on Vancouver Island came just two: Gavin Murray and Marianne Sillseenult, a member of the Cowichan band and St. Anne’s parish. “I am here because I don’t want people being killed,” she said simply.