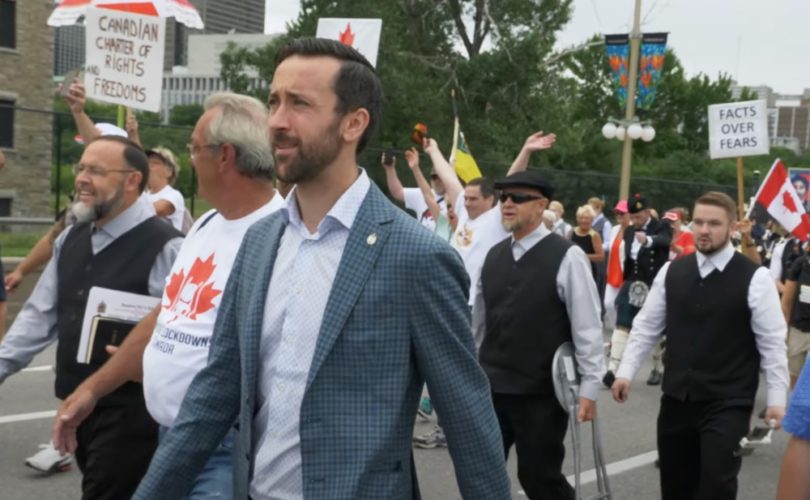 OTTAWA, Ontario, July 7, 2021 (LifeSiteNews) – Hundreds of people gathered to celebrate Canada Day at a freedom rally on Parliament Hill in Ottawa this year.

The rally was aimed at regaining lost freedoms. The organizers’ description of the event noted, “Never in our history has the government quarantined healthy people, shut down businesses en mass, forbidden people from visiting their family, or banned people from worshiping in their religious communities.”

Catholic and pro-life MP Derek Sloan spoke at the event.

“This is our home and native land. Our history is a rich tapestry of wisdom so we can grow as a country,” Sloan said. “God bless you. God bless Canada. Never stop fighting!”

Some wanted to ‘Cancel Canada Day’

This rally was held contrary to a growing call leading up to Canada Day to cancel celebrations. At another rally, also held on Parliament Hill on July 1, many called to “Cancel Canada Day” after the discovery of graves at various Indigenous residential schools, despite evidence that these graves were neither unmarked nor hidden.

However, there have been numerous reports to show that media accounts, which tend to attack the Catholic Church as to blame, have been grossly overexaggerated. Most mainstream media reports neglect to mention the excessively high rates of tuberculosis among Indigenous children and the substantial lack of proper financial support from the Canadian government, which forced Indigenous children into those schools in the first place. Some Indigenous people have come forward to reveal that they benefited from and are grateful for the residential schools.

While the rally attempting to cancel Canada Day was publicized on mainstream news outlets, those outlets failed to mention the freedom rally in support of patriotism and regaining lost rights.

In the U.S., leftists have engaged in similar efforts to minimize, cancel, or disparage Independence Day (July 4), citing claims that America is racist.