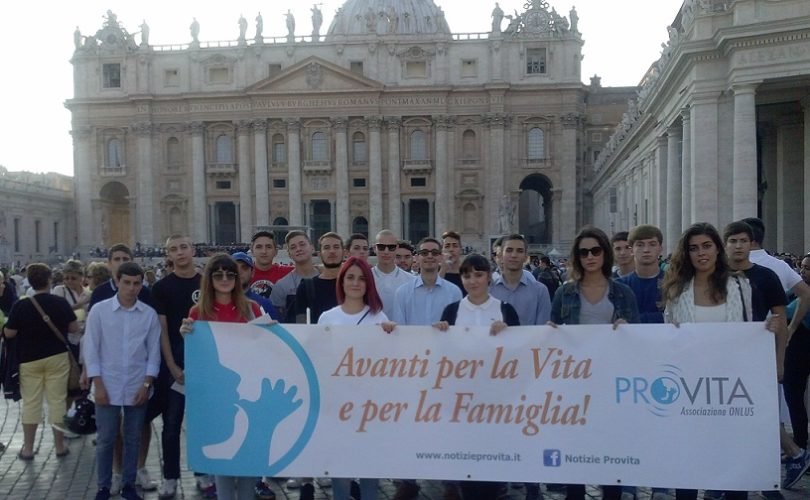 Hundreds of mainly younger Italians joined a march on Saturday in Rome to voice their concerns to the Vatican’s Synod of Bishops about the “terrible attacks” on the family that have suddenly come thick and fast in Italy by highly-funded and organized activists.

March organizer and long-time Italian pro-family activist Toni Brandi, president of Pro-Life News, told LifeSiteNews that the event was to counter the “continuous homosexualist propaganda in promotion of this so-called gender identity” that has formed the basis of legal assaults against the natural family, and freedom of expression.

“It was fantastic because there were probably 400-600 mainly young people. It was great to see in this hedonistic society that there are so many young people who are willing to come out on a Sunday and defend the family,” Brandi said.

A group of the marchers later joined about 80,000 people who gathered on Saturday afternoon in St. Peter’s Square to pray for the Synod that is meeting this week to discuss issues related to the family. March organizers said in a statement that “despite today’s absurd theories,” the natural family is “the core of human society since its inception and involves rights and responsibilities to educate and raise children.”

They said they were there to oppose two “currents of thought” that are swiftly gaining the upper hand in the public debate in Italy: “a neo-Marxist ideology” that proposes to dismantle the social foundations of the family and replace it with the state; and “a financial materialist current” that is gaining billions in profits on pornography, contraception, artificial procreation techniques like IVF, and related industries.

Leading thinkers of this current, Brandi said, include the radical “Frankfurt School” theorists Max Horkheimer, Theodor Adorno, Herbert Marcuse, Jürgen Habermas, each of which who worked to bring about early 20th century ideologue Antonio Gramsci’s ideal of “Cultural Marxism” that would take over societies through the “long march through the institutions” rather than violent revolution.

Brandi told LifeSiteNews, “If you look at the world, particularly in the west right now, from EU and international organizations like the UN, there is a continuous homosexualist propaganda in promotion of these gender identity ideas, which are based entirely on this neo-Marxist ideology, not on any scientific evidence whatsoever.”

“It basically states that I’m not a man or a woman; my biological sex has no importance whatsoever. What counts is my ‘gender,’ which I can decide myself.” He added that this ideology has, only in the last year, begun to be enshrined in Italian law.

“The most horrific thing,” he added, “is that they’re trying to brainwash our children from an early age through their ‘sexual education’ work in schools,” which the government is encouraging through the equalities ministry.

Brandi said that he hopes the bishops of the Synod will address these ideological attacks that seem to be gaining currency around the world in the secular spheres of government and media.