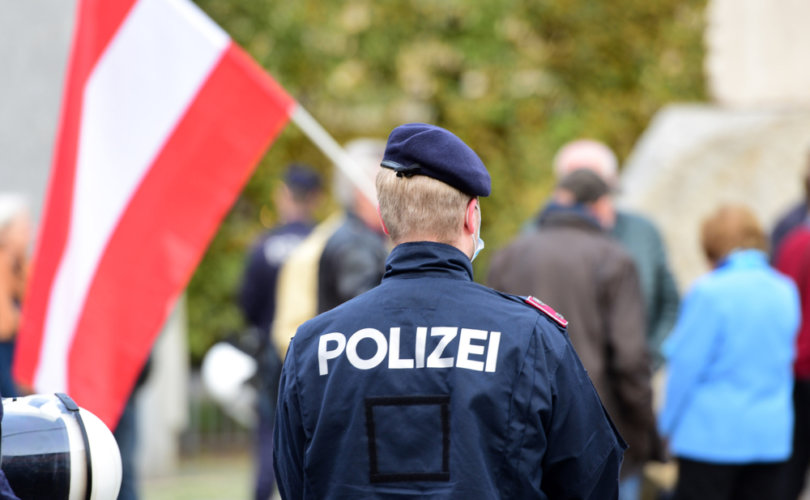 VIENNA (LifeSiteNews) — 600 Austrian police officers have asked the Austrian Interior Minister to withdraw plans for mandatory vaccination and called for an end to discrimination against unvaccinated people.

The letter, addressed to Austrian Interior Minister, Gerhard Karner, and dated January 10, was signed by three police officers who claim to represent a group of over 600 of their colleagues.

“We do not want to face the population in a threatening manner during what are predominantly peaceful demonstrations which were organized due to the increasing dissatisfaction of the people with politicians,” wrote the authors of the letter.

Last weekend, several demonstrations took place throughout Austria again, including in the country’s capital of Vienna, where an estimated 20,000 people took to the street Saturday to oppose plans to make vaccination mandatory for every citizen over 18.

The Austrian Ministry of the Interior reacted to the letter by saying that “the people who signed [it] can be assigned a clear political orientation.”

“85% of the 32,000 Austrian police officers have already been vaccinated, that is a clear statement,” the ministry added.

However, the authors of the letter denied precisely this, arguing instead that they do not represent any particular political group.

“We are not far-right or far-left extremists, we are not anti-vaxxers … we are a group of several hundred police officers from the whole of Austria … united by our concern for the rule of law, freedom of thought, our fundamental rights, as well as our health,” they wrote.

The authors then made a number of requests to Interior Minister Karner, asking him first of all to “ensure that no vaccine mandate, either professional or general, or any other form of indirect forced vaccination be introduced in Austria.”

They then asked for the suspension of the so-called 3G rule at workplaces, which consists in allowing access only to people who have been vaccinated against COVID-19, tested negative for it, or who have recovered from the disease. The authors called instead for a complete suppression of the rule, or for its conversion into a 1G rule with only a negative test requirement for everyone, as a way to ensure that “discrimination against unvaccinated colleagues comes to an end.”

Finally, the authors asked to be seen as helpers rather than enemies of the people.

“We want to be there for the people, as friend and helper,” they wrote.

Anti-vaccine-mandate protests have been taking place in Austria every Saturday since plans for the mandatory vaccination were announced and have been largely peaceful, with only few reports of skirmishes between police and demonstrators.