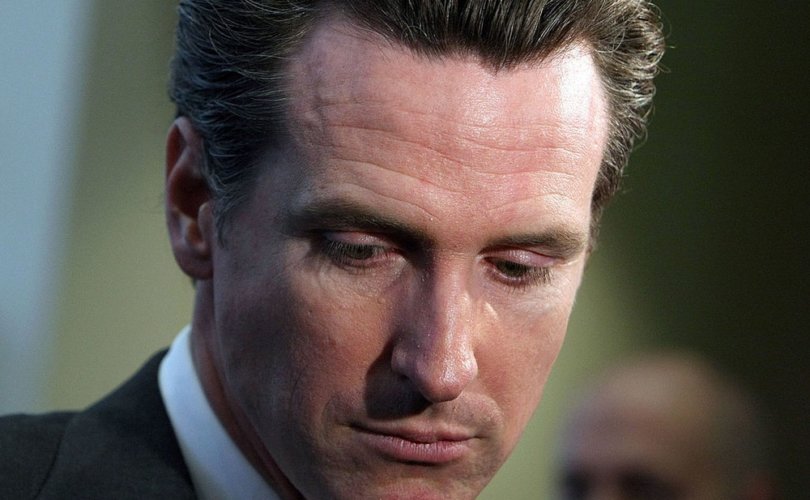 SACRAMENTO, California, May 11, 2020 (LifeSiteNews) – Hundreds of pastors in California have announced plans to defy Democratic Governor Gavin Newsom’s executive orders deeming religious gatherings nonessential. In an open letter to the Governor, dated May 7, they “declared their intent to begin holding in-person church services beginning on Sunday, May 31, 2020.”

In their letter, the pastors lamented “a very long list of ‘secular’ exceptions” from the stay-at-home orders in place in the Golden State.

“The exempted persons and facilities include most governmental operations,” they wrote.

The pastors made not only a legal argument based on the First Amendment, but also explained their conviction “that ‘we the people’ are ultimately responsible to protect the individual liberties that may be lost unnecessarily during times of crisis regardless of whether public officials’ actions are well intentioned.”

“Without the checks and balances of the courts and legislature,” the letter continued, “the clergy now stand as a counterbalance to unchecked regulatory action.”

“The mandated closure of religious organizations is having a significant and detrimental secondary effect on the citizens of California,” argued the religious leaders.

They mentioned the “numerous ministries and social services provided by churches to the poor, unemployed and distressed,” which are currently no longer found in California.

“The clergy of this state are convinced that they must reopen their ministries to fully serve the needs of their communities,” they told the governor.

“The spiritual services of ministries are absolutely essential to the health and welfare of the people of California. Therefore, the religious leaders of California are coming together to make their voices heard in Sacramento. In times of national crisis, the clergy have a responsibility to lead.”

According to the San Bernardino Sun, Governor Newsom during a press conference last Thursday “acknowledged the work of the faith community in serving those in need, including the homeless, seniors and children.”

Newsom said that “congregations of people from far and wide coming together in a closed space at a large scale remains a point of concern and anxiety for us. We are working on guidelines for physical distancing and working with faith leaders talking about unique conditions in their own facilities. Nothing is etched in stone.”

He added, “I take very seriously those concerns about people of faith and I’m very sensitive to those who want to get back to church. But the health of those communities is foundational.”

On May 2, several pastors ministering to Romanian Christian congregations in Chicago told Democratic Illinois Gov. J. B. Pritzker that they will be defying an executive order limiting religious gatherings to only 10 people and are unafraid to take the issue to court.

“Please be advised that, beginning on May 10, 2020, our congregations will resume in-person church gatherings, and we will no longer adhere to the 10-person limit or the other unconstitutional restrictions comprised within your orders,” they wrote.

Pastors in Massachusetts and Virginia join call to reopen churches

In Massachusetts, 260 pastors told pro-abortion Republican Gov. Charlie Baker on May 7 that religious institutions are, in fact, essential.

“It is also clear that church is essential under both our state and federal Constitutions,” they wrote in their letter, which was published by NewBostonPost.

The governor’s advisory board on reopening the state has no members representing Christian communities and institutions.

“We note with disappointment that, despite the 8,000 churches in the Bay State and the millions who worship in and are served by them, they have no representation on that board. We therefore hope that you will hear directly from us now.”

The first phase of the reopening in Massachusetts is set to begin on May 18. It has not yet been determined what parts of regular life will be allowed to open up again.

“When the phased reopening of our Commonwealth begins, the reopening of our churches must be in the first phase,” the pastors wrote. “It is upsetting that, unlike roughly half the states across our nation, churches in Massachusetts were not deemed ‘essential’ at the outset, but this must come to an end.”

“The Church of the Lord Jesus Christ is a hospital for the spiritually sick,” the religious leaders wrote on May 4. “Yet corporate worship services of more than 10 people have been banned in Virginia since March 23, regardless of the public-health protocols in place and notwithstanding that groups are permitted to gather in settings such as non-retail offices and ‘essential’ retail businesses.”

According to the pastors, prohibiting “corporate worship services has exacerbated the sense of sorrow, isolation, and fear felt by so many citizens across the Commonwealth.”

“Because corporate worship is central to Christian life, it is extraordinary for churches to forego meeting for even a single Sunday. Thus, with each passing week that corporate worship is banned, as churches stand ready to implement reasonable public-health precautions, the government pushes Christians closer to the point where they must choose to sin against God and conscience or violate the law.”

Like Christians in other states, the Virginia pastors assured the Governor that social distancing and other protective measures would be applied. “As pastors, we share that desire and are committed to protecting the physical well-being of all who attend church services,” they said.

In Kentucky, a federal judge sided with religious groups, arguing that Democratic Governor Andy Beshear did not provide “a compelling reason for using his authority to limit a citizen’s right to freely exercise something we value greatly – the right of every American to follow their conscience on matters related to religion.”

Meanwhile, Vice President Mike Pence told a group of religious leaders in Iowa last Friday that the lack of church services has “been a burden” for the faithful.

“It’s been a source of heartache for people across the country,” he said, adding that creative efforts to hold services in other ways, for instance online, “made incalculable difference in our nation seeing our way through these troubled times.”