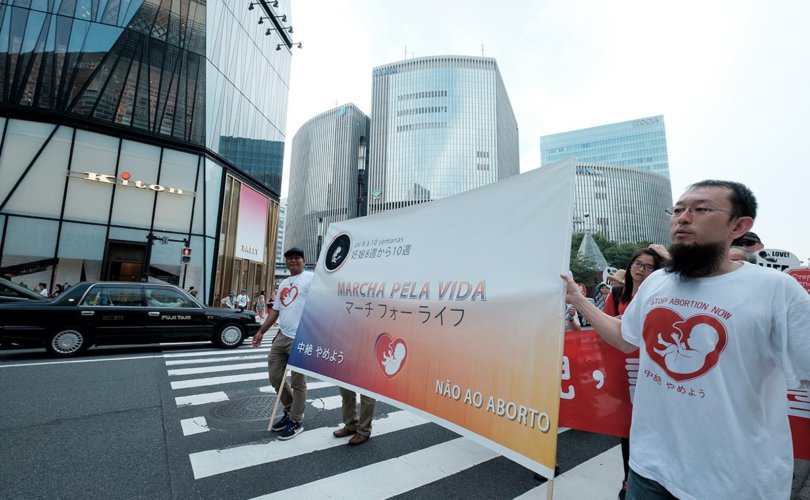 Like events of the same name all over the world, the Japanese March for Life’s website says that since 2014, it has been a “peaceful, joyful and prayerful” demonstration to “abolish abortion from the world for the children, for the women, for the families.” Organizers say it’s meant to coincide with Japan’s annual Marine Day, the Japanese name for which is a homonym for “giving birth.”

This year’s march began with a mass officiated by Fr. Leo Schumacher at Tsukiji Catholic Church, one of the oldest in the country. From there, demonstrators marched on Tokyo’s main streets through the districts of Ginza and Nihonbashi. All the way, a procession carried a statue of Our Lady of Fatima decorated with roses and lilies. It concluded at Hibiya Park near the National Diet building, home of Japan’s legislature.

The march featured an enthusiastic turnout of men, women, and children of all ages for the hour-long, three-kilometer trek, as well as five Catholic priests.

“I hope from the bottom of my heart that human life which is a gift from God will be protected from the beginning to the end without any exception,” Archbishop of Tokyo Fr. Isao Kikuchi said in a statement commemorating the event. “And I hope your trial of March for Life Japan will continue for a long time so that Church will get engaged in accordance with your effort.”

Archbishop Joseph Chennoth, the Apostolic Nuncio to Japan, also expressed his sentiment that the “greatness of a nation's civilization is measured by the way it treats human life in its weakest forms,” and therefore he prayed the march “may raise awareness about the need to protect human life from womb to tomb.”

Japan first legalized limited abortions in 1948 under the Eugenic Protection Law, which was later amended to effectively allow abortion-on-demand. March organizers note that the country exceeded one million annual abortions as soon as 1954, and Fr. Thomas Onoda laments that “a total of 38,460,206 Japanese babies were killed from 1949 to 2015.”

“In Japan, people have been celebrating Children's Day since the 7th century,” said Onoda, a Society of Saint Pius X member who has been walking with the march since 2016. “Even unborn, babies are precious treasures of Japan.  Under its peaceful Constitution, Japan seeks peace in the world as an ideal.  However, from 1949, we have been making war against our own innocent babies inside their mothers' wombs by pitilessly killing them.

“The March for Life is not a movement of hatred, but of love; not of anger, but of prayers; not of confrontation, but of compassion,” he continued. “It is a movement to show our joy at sharing the lives given to us.”

Organizers observed that many of this year’s participants were first-timers unaware of previous years’ marches, but lamented that relatively few local Japanese Catholic priests took interest in the event. “They need to be aware of this Catholic issue,” the March told LifeSiteNews.

RELATED: The Asian Tiger ― Japan ― is in danger of extinction