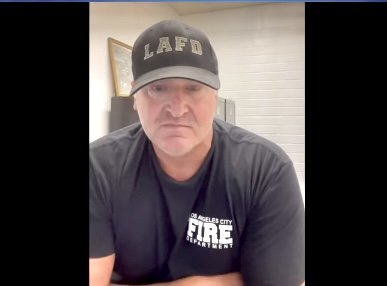 LAFD Captain Christian Granucci is a 31-year veteran who is speaking out against vaccine mandates for Los Angeles city employees.YouTube

LOS ANGELES (LifeSiteNews) — Firefighters and police officers in Los Angeles have positioned themselves on the front lines in the battle against coercive COVID-19 vaccine mandates, joining together to demand freedom from forced inoculation in a “monumental fight to preserve our Liberties.”

Founded by stakeholders with the Los Angeles Fire Department (LAFD), “Firefighters for Freedom” has partnered with “Roll Call 4 Freedom,” an organization made up of Los Angeles Police Department (LAPD) members, to combat forced COVID-19 jabs for city employees.

Comprising at least 350 firefighters with the LAFD and hundreds of sworn officers and civilian members of the LAPD, the groups are planning legal action against the City of Los Angeles, represented by California attorney Kevin McBride.

The pushback is in response to a COVID-19 injection mandate for all city employees that was put forward by the L.A. City Council, passed unanimously, and signed by Mayor Eric Garcetti last month.

The mandate requires all city employees who have not gotten a medical or religious exemption to be “fully vaccinated” by October 5, affecting some 60,000 police officers, firefighters, and others.

“Our goal is to stop the mandated vaccinations for all City employees as well as the citizens of this great country,” Firefighters for Freedom said on its website.

The group asked supporters to “[p]lease stand with us in this monumental fight to preserve our Liberties.”

Announcing September 2 that it was “joining LAFD’s lawsuit as a subgroup,” Roll Call 4 Freedom said the issue is larger than just one department or one city.

“Our nation, city and department are in an unprecedented time, and OUR actions will define our future as Americans, because this is a FREEDOM issue,” Roll Call said.

“It is much larger than a police issue, a department policy issue, or a city mandate.”

LAPD Sgt. Veronica Saucedo told the Los Angeles Times that Roll Call 4 Freedom has hundreds of members, and that the group is focused on “individual rights, personal choice and … managing our own health.”

Encouraging members “not to submit anything, including a religious exemption,” Roll Call 4 Freedom said “filing for an exemption is a form of self-reporting.”

The group said it is pushing for a removal of the mandate entirely, without the need to request an exemption.

The law enforcement group encouraged more people to join the fight, including those who have already taken the injection, saying “we need to rally with each other, as brothers and sisters to stand against [forced vaccination.]”

“The more support we have from the rank and file and the larger our group grows, the better our chances are of success in litigation,” Roll Call said.

Noting that the LAPD is “one of the largest police departments in the nation,” the police group suggested that the efforts of LAPD employees to oppose forced vaccination “will affect law enforcement agencies across the nation.”

News of the combined efforts of LAFD and LAPD personnel comes after an L.A. fire captain’s passionate video denouncing vaccine mandates as “tyranny” went viral last month, triggering an “investigation” into the captain for his controversial statements made while in uniform.

As previously reported by LifeSite, Captain Christian Granucci, a 31-year veteran of the LAFD, called Los Angeles’ impending COVID-19 vaccine mandate “tyranny” and said he was “done being silent.”

Granucci also hinted that he had joined with hundreds of like-minded city employees who were ready and willing to take legal action to protect their freedom to refuse the jab.

McBride, who has encouraged analysis of VAERS (Vaccine Adverse Event Reporting System) data to ascertain the true risk of COVID-19 shots, was chosen by Firefighters for Freedom to represent their members in their battle against the mandated jabs.

McBride, who has successfully represented employees of global pharmaceutical company Incyte Corporation in their fight against jab mandates, and has “represented small entities and employee groups against very large companies” throughout his career, added that “it’s time to take the fight to the City and County, and to protect your rights as police officers.”

“We can either be known as the ones who helped lead the charge to freedom, or we can set the vaccine mandate precedent for other agencies and watch our freedoms end — not just in our jobs, but in everyday life,” wrote Roll Call 4 Freedom on its website.

“If we give in to this mandate, think about what will be asked of us tomorrow. What else will you give up? Your children will be next. Your promotions, upgrades, transfers, and futures are at stake,” the group warned.

“This may cost our jobs and our family’s financial security,” Roll Call’s statement concluded. “It will be stressful, mentally and emotionally, on all of us and our families. But, we must be willing to die on this hill, otherwise there won’t be another to fight on!”

Firefighters for Freedom stated on its site that its members “believe in the right to work, freewill [sic], personal choice, medical freedoms, and consent without coercion, retaliation, threats, disciplinary action, or termination.”

“This is a human rights issue,” the firefighters’ group said. “We hope you stand with us, for we believe all members and citizens have the freedom of choice and natural rights.”

News of the L.A. first responders’ efforts to resist the city’s vaccine mandate comes just ahead of a much-discussed recall election in the state, with Democrat Gov. Gavin Newsom fighting to remain in office against popular conservative talk show host, author, and attorney Larry Elder.

Newsom has been responsible for some of the harshest and most restrictive COVID-19 measures in the United States since March 2020. Elder has said that if he takes office, he will remove mask and vaccine mandates in the Golden State before his “first cup of tea.”