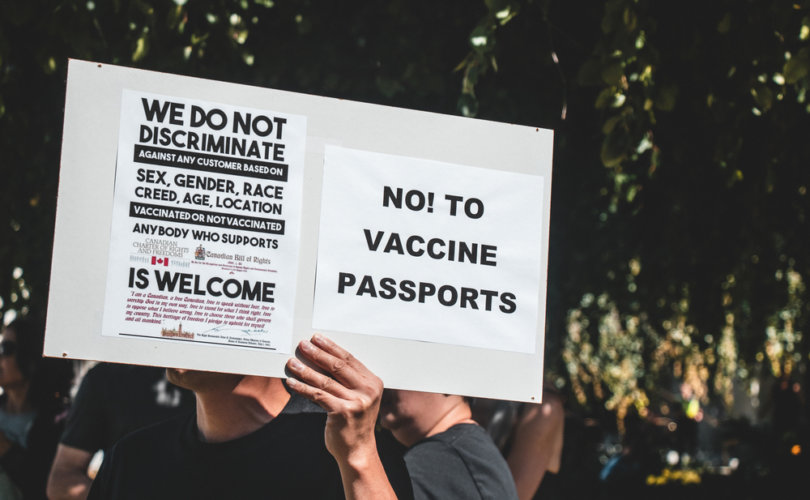 On September 22, the province implemented vaccine passport measures. Currently, almost 80 percent of residents age 12 and up have taken both jabs, which leaves 20 percent of vaccine-eligible Ontarians banned from a variety of “non-essential” services.

The types of businesses included in the vaccine-segregation policy range from restaurants to fitness facilities to movie theaters. Almost 150,000 people have joined a Facebook group called Ontario Businesses Against Health Pass, whose members share information about businesses who respect medical privacy and will accommodate those who wish not to share their personal information.

A website called Ontario Businesses Against Discrimination has also popped up, it is a growing directory of businesses that have decided to not enforce the vaccine passport mandate. Many of the businesses listed are also open to hiring people who have chosen not to disclose their medical status, or have lost a job as a result of a vaccine policy.

Social media groups against personal freedoms for Ontarians have been created to “expose” businesses that advocate for the constitutional rights of Canadians. These groups have not gained much traction and are difficult to find.

One businessman who is a proponent of medical freedom is Gregg King, who owns King Jiu Jitsu. On Facebook, he wrote, ““At King Jiu Jitsu, we do NOT discriminate … Vaxxed or not vaxxed you are all welcome to train in a safe and friendly environment.”

King said to one newspaper, “When people come in, I don’t ask if they’ve been vaccinated. Others can ask if they want to, but I’m not up for it.”

Businesses that do not comply with the Ontario policy run the risk of being fined heavily by the government. There has been a growing movement against the vaccine passport in Ontario, and it remains to be seen what legal challenges might look like if businesses come under fire from public health because they have chosen to respect the bodily autonomy of their patrons.

Jenna Graham, owner of Harbour Diner in Hamilton, said she will not enforce a coercive vaccination policy. “Usually, that’s shared information between your doctor and yourself and not anybody else’s business,” she said. “So that’s why we’re not choosing to do so.”

Graham questioned why vaccinated and unvaccinated people can do activities together like riding in an Uber or shopping in a retail setting but not eat in the same restaurant except at separate tables.

Another restaurant that publicly supports medical freedom is Toronto-based restaurant Tacos El Asador. Rebel News reported on the restaurant and showed images of their store window where they have posted striking images of the Canadian Bill of Rights and the Charter of Rights and Freedoms. They posted a sign that stated that trespassing will not be tolerated, pursuant to the Canadian Bill of Rights Section 1,2 (A) and the Criminal Code of Canada Section 34, and that the notice extends to police, bylaw, and public health officers.

Ontario residents who believe it is their prerogative to expose small businesses by calling the authorities on those who are non-compliant have filed numerous complaints in a variety of municipalities. Cities are struggling to cope with the volume of complaints, as there are more non-compliant businesses than they can handle. It is possible that there are many more businesses respecting their patrons but have not posted on social media about it.

Police have been involved in a few instances where an unvaccinated person has refused to leave an establishment. Some police departments have stated that they will respond to calls from businesses if altercations arise over the segregation policy, but some departments have made it clear they are reluctant to involve themselves in enforcing vaccine passports.

“Policing should focus on crime. It should be up to the public health units to monitor and enforce. We’re not even sure of all the legalities of enforcing this passport,” Kawartha Lakes Police Service chief Mark Mitchell said.

Businesses in Ontario are divided almost down the middle regarding the implementation of vaccine passports. When the Canadian Federation of Independent Businesses polled Ontarians, 45% supported the passports, 40% did not, and 15% were unsure.