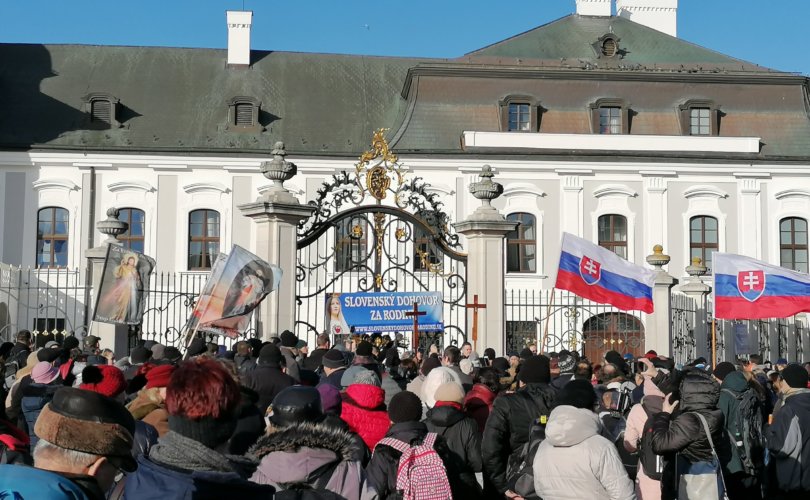 The Slovenský dohovor za rodinu (SDZR, or “Slovakian Convention for the Family”) organized a public recitation of the Holy Rosary in Bratislava’s Freedom Square on February 11. Afterward, the crowd marched to Hodžovo Square, where the presidential palace is located.

According to participant Matúš Belák, the three-hour event was attended by between 500 and 700 people from all over Slovakia.

“Some of us were students, and others were older people,” he told LifeSiteNews.

“People came from throughout Slovakia, but because (the rally) was on a workday during work hours, not as many people came as might have.”

The principal reason for the demonstrations was to ask the Slovak government to state that it will never ratify the Istanbul Convention (on preventing and combating violence against women and domestic violence), which many Slovaks believe weakens the definition of marriage between one man and one woman.

Slovakia first refused to ratify the agreement in March 2019. Robert Fico, the nation’s former prime minister and leader of the ruling party, said then the government could not agree to a law that does not respect the beliefs of most Slovaks.

“Some parts of the (Istanbul) convention could be incompatible with the Slovak constitution, as it allows for the introduction of same-sex ‘marriages,’” he stated.

Slovakia reiterated its refusal in November.

Belák said the organizer, SDZR’s leader Father Marián Kuffa, was asked by his ecclesiastical superiors not to attend the rally, apparently because his presence might have inflamed people of both the far-left and the far-right. The student suggested that the heavy police presence at the rally was due to tension around the question of LGBT ideology.

The rallies were peaceful, and during the demonstration outside the presidential palace, the pro-family crowd began to sing.

“When we all gathered, we sang some traditional Catholic hymns, like “ó Mária, bolestivá,” Slávna si Kráľovná nebies Pani,” and other Marian hymns,” Belák told LifeSiteNews.

“Liberal photographers were running around and taking pictures of us and the demonstration,” he added.

“Luckily, even then no conflict happened, which was quite a blessing.”

SDZR regularly holds pro-family rallies to protest LGBT Pride parades and organizes smaller prayer demonstrations throughout Slovakia year-round. The group has also helped circulate a petition against the Istanbul Convention, believing that the binding European agreement weakens the definition of traditional marriage. Slovakia has so far refused to ratify the document.

According to SDZR’s website, it affirms that marriage is “a unique bond between a man and a woman” and that the principal purpose of marriage is to have children and raise them properly. It believes that the family is the basic unit of society and parents have the right to raise and educate their children in accordance with their own religious and philosophical beliefs.

Belák said Slovakia’s resistance to LGBT ideology resembles that of Hungary and Poland but is not as strong.

“Although 70 percent Slovakians are Catholics, only around 15 percent are practicing,” he told LifeSiteNews.

Slovakia goes to the polls on February 29, and Belák fears that a left-wing electoral victory will mean radical change to Slovakia and its laws. However, he believes that even the current government is a “servant to Brussels,” i.e. the European Union, despite being somewhat conservative and populist.

“They have promised the United Nations that LGBT rights will be implemented in our laws soon,” he said.

“ … People used to speak of ‘Christian Slovakia’, but now we’re reaching the point at which either this will remain or we will become like other liberal countries,” he continued.

“If  Slovakia falls, the (whole) Visegrad Group, the central European resistance, will fall.”

However, Belák is hopeful because of Fr. Kuffa and the SDZR.

“Luckily, Fr. Marián Kuffa and other great Catholic priests and even Bishops (like Ján Orosch) are (talking) about these issues, and so we Christians here in Slovakia are slowly waking up from a deep sleep,” the student said.

The pro-family group is organizing another large event for February 23: “The Rosary for Slovakia.” A few thousand people are expected to participate, inspired by previous public prayers.

“The February 11 event had a few hundred participants, but its online video had 91,500 viewers in only 24 hours,” Belák said.

He believes the fight for the family is predominantly spiritual.

“There is a large spiritual warfare going on, the battle that Our Lady of Fatima told us about through Sister Lucia,” the student said, “the final battle for the family.”

But Belák has confidence in the strength of the patroness of Slovakia, Our Lady of the Seven Sorrows.

“We are going through these sorrows now,” he said. “But in the end, her immaculate heart will triumph.