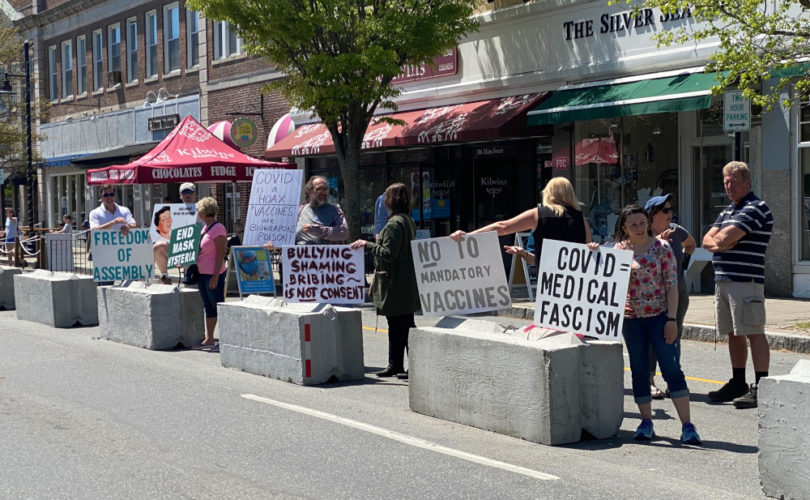 May 17, 2021 (LifeSiteNews) – In over 40 countries, people in their hundreds, their thousands, and even hundreds of thousands, came together last Saturday to protest against COVID-19 related restrictions in the second global protest of its kind.

While many such protests have been organized previously, Saturday’s event was coordinated by World-Wide Demonstration, which started as an action group in Germany in the spring of 2020. The group held its first global protest on the one-year anniversary of the start of the restrictions on March 20.

Protestors all across the globe, in Australia, New Zealand, Japan, India, South Africa, much of Europe, Argentina, the U.S., and Canada, took to the streets to oppose COVID-related lockdowns, mandatory vaccines, vaccine passports, and the unreliable COVID PCR tests.

While almost entirely ignored by the mainstream media, the size of the protests was hard to miss, with some cities seeing over a hundred thousand gathered to protest against the restrictions.

LifeSiteNews database manager Meghan Mulherin attended the rally in Hyannis, Massachusetts, and mentioned that even in this small town, 75 people attended. They received such a positive reaction from passers-by that a nearby temporary COVID injection site moved away from the protest due to the public support for the protests.

Despite the strict lockdown restrictions currently in place, the streets were full in Toronto, with thousands of demonstrators chanting “Justin Trudeau’s got to go.” Some reports described the size of the event as “record-breaking.”

They were joined by their compatriots in Vancouver and Ottawa, who demanded “freedom,” and carried signs reading “no to tyranny.”

In London, Ontario, Pastor Henry Hildebrandt of the Church of God in Aylmer attended the rally. A LifeSite sustainer present commented that “after his speech, one of the organizers noted that there were officers waiting on the side lines who perhaps were going to arrest him. This after everyone had affirmed support for law enforcement and for the true purpose of their mission. So, they got a good scolding with a reminder of what that mission is.”

Pastor Hildebrandt has been subjected to increasing governmental persecutions as a result of the restrictions currently placed on worship in Ontario. The day before the protest, a judge ordered that the doors of Hildebrandt’s church be locked for defying provincial lockdown rules, and that the church, pastor, and assistant pastor be fined a total of $48,000 in penalties, as well as pay $69,000 in legal fees.

In London, U.K., protestors thronged outside the left-leaning and pro-lockdown BBC, chanting “shame on you,” which the famous news outlet managed to ignore, and instead placed stories about cattle and a lost whale on its “Must see” page. It was estimated that London itself had over 100,000 protestors present on the day.

Nor did the damp weather prevent those in Scotland from their own protest, as Edinburgh’s streets saw some two hundred people express their displeasure with country’s lockdown.

Protestors took the streets across other European countries, as well, with video footage documenting the extent of the opposition to restrictions in Croatia, Norway, Lithuania, the Netherlands, Ukraine, Austria, Serbia, Italy, Germany, and Ireland. World-Wide Demonstration’s Telegram channel also featured videos and images of the protests, with footage being sent in from around the world.

A press release issued before the event stated that “excessive coronavirus restrictions must come to an end, and all state of emergency declarations enabling these measures must be repealed.”

“We cannot allow our Human Rights to be re–packaged as Human Privileges, to be conditioned upon compliance with Authoritarianism,” stated the group.

This message was echoed by former Pfizer Vice President Dr. Michael Yeadon, who has been speaking out about the truth of the experimental injections and the lies being spread by governments about COVID-19. Yeadon addressed the protest held in Canterbury, U.K., urging those present not to be afraid of the virus.

“Once you’ve survived it, which you nearly always do — 99.8% — you’re immune. None of these variants are going to catch you out, you don’t need to be vaccinated against a common … respiratory virus like this.”

World-Wide Demonstration has scheduled its third global event to take place in two months, on July 24.

All images were submitted by LifeSite Sustainers. To join our Sustainer program, click here.