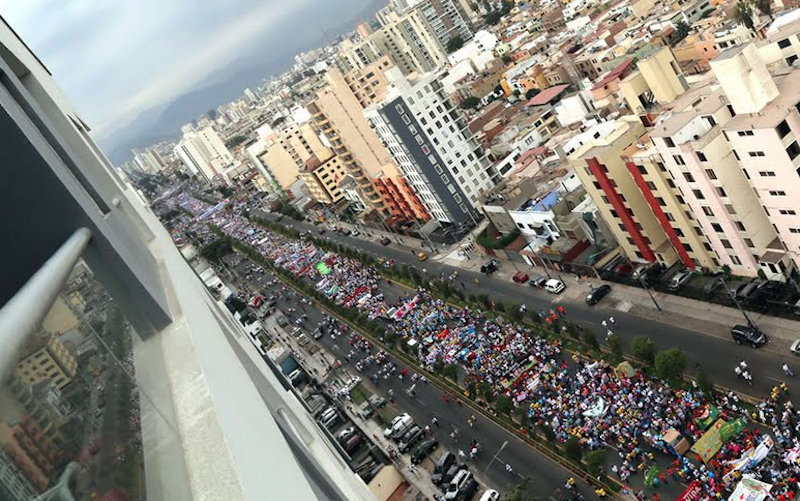 LIMA, Peru, March 25, 2015 – On Saturday, March 21, an estimated half a million people expressed their opposition to all forms of abortion and affirmed their support for the right to the natural family and the life of unborn children in the most popular event in the history of Peru.

The popular support for this third edition of the March for Life in the Peruvian capital exceeded the organizers’ expectations. According to one of its spokesmen, Sandro del Negro, this year they expected to gather 300,000 people after the 250,000 who attended the event last year. Besides Lima, there were marches in the cities of Cusco and Piura.

Local media called the event 'historical' and registered the festive atmosphere in which it developed. Entire families attended the march and most of the participants were young. Catholics and Protestants were the majority among the demonstrators, but a local TV channel also identified some agnostics and small groups of Muslims and Jews.

Peruvian Congressman Julio Rosas attended the event as the leader of a large group of evangelicals. “Life is a right to be protected by any society deemed civilized. The Peruvian population cannot afford to become barbarian and install a culture of death in our country,” said the legislator.

Juan Luis Cardinal Cipriani, Archbishop of Lima, served as the keynote speaker. “Today we are here,” he said, “to defend the lives of the most vulnerable, the unborn, of those who have no voice.”

The Primate of the Catholic Church in Peru also read a message that Pope Francis sent to the participants, encouraging them to defend the right to life of the unborn because “all life is sacred.”

The ‘voice’ of the streets

An opinion article by journalist Diana Seminario, published on Monday by the Peruvian newspaper ‘El Comercio’, highlights the political relevance that the event has on the national agenda.

She recalls that in the 2011 elections, the (then) candidate Alejandro Toledo, “proved to be openly in favor of the decriminalization of abortion, as well as the egalitarian marriage and the legalization of drugs. The former president made the remarks while leading the electoral preferences and did so before the foreign press correspondents. In the end, Toledo didn’t pass to the second round and finished in fourth.”

“Saturday's march was a signal of what happens when an organized group of people raises its voice and manifests. Half a million people marched to say yes to life. Politicians are warned,” she wrote.

Currently, abortion is recognized as a crime in the Peruvian legislation and there is only one situation that is not penalized. Article 119 of the Penal Code provides that abortion is “exempt of punishment” when committed with the consent of the woman “when it is the only way to save the life of the pregnant woman or to prevent her health from suffering serious and permanent harm.”

In June last year, the government of Ollanta Humala promulgated a National Technical Guide to unify the procedures for the application of Article 119 in hospitals and clinics in Peru, as long as the babies have less than 22 weeks of gestation.

In practice, the document facilitates the so-called 'therapeutic abortion', because it allows an ambiguous interpretation of what is 'health for the mother' when it assumes – as indicated by the guide itself – a 'gender' approach.

In September of the same year, feminist groups proposed to the Peruvian Congress a bill to decriminalize abortion in cases of rape, artificial insemination or non-consented transfer of eggs. The request was supported by 64,000 signatures and currently is being followed in the legislative house, which is unicameral.

The Peruvian Episcopal Conference responded with an official report requesting an audience in the Congress, as part of the debates to deliberate on the initiative. “We strongly condemn all forms of rape and defend, at the same time, that it is never legitimate to kill the conceived child, not even in reprehensible and brutal circumstances of a rape,” they said.

In the same year, organizations that advocate a 'gender agenda' also tried to approve in Congress a bill that would legalize civil unions between persons of the same sex in the country, through Congressman Carlos Bruce, 58, who became last year the first Peruvian politician to publicly reveal his homosexuality.

On March 10, the Commission of Justice of the Congress rejected the bill, amid a strong media controversy.

Therefore, the March also assumed, besides the defense of the right to life, the defense of the natural family. In one of the speeches made on Saturday, it was said: “We are 500,000 gathered here (…), we are a Peru that defends life, that defends marriage between a man and a woman and that defends the family” and openly congratulated the legislators who had voted against 'civil unions' between homosexuals.

Among the participants, in addition to Congressman Julio Rosas, legislators Juan Jose Diaz Dios and Juan Carlos Eguren also participated in the event.

For the organizers, the March for Life in Lima is an articulate response to the advancement of the 'gender agenda' in the country. They see it as a great platform through which it’s possible to “defend the life of the weakest” and “to strengthen the roots of the culture of life” in the Peruvian people.

On the eve of the first march held in 2013, one of its main promoters, Cardinal Cipriani, Primate of Peru, said, “The time has come to express ideas with actions and in the streets.” At that time, the event brought together 100,000 people. Three years later, organizers estimate attendance at half a million people.

Cardinal rebukes culture of death as Peru considers abortion, homosexual legislation
Tens of thousands of Peruvians march in opposition to the legalization of abortion