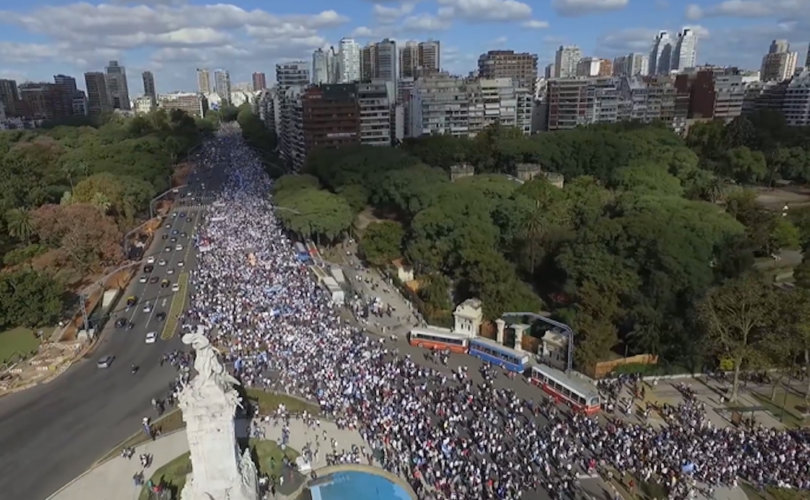 ARGENTINA, March 27, 2018 (LifeSiteNews) — Hundreds of thousands of Argentinians filled the streets in 200 cities across the predominantly Catholic country on Palm Sunday to march for life and against a bill to legalize abortion now before its national Congress.

While 50,000 marched in the capital Buenos Aires — formerly the diocese of Pope Francis — other cities reported crowds of up to 20,000 participants in the “Great Rally for Life” under the theme “save them both,” according to the Catholic online magazine Crux.

One participant tweeted there were “literally millions throughout the country.”

Although the Catholic Church did not organize the march, more than 70 Catholic bishops took part either in person or on social media.

The Alliance of Evangelical Churches of Argentina also promoted the event, which included offers in some locations of free ultrasounds for pregnant women and collections of donations for charities that help mothers in distress, Crux reported.

For 20 years, Argentina has celebrated the National Day of the Unborn Child on March 25, which is also the Feast of the Annunciation, when Catholics mark the Virgin Mary’s “yes” to becoming the Mother of God and the conception of Jesus Christ in her womb.

This year, however, the march for life took place as Argentina’s lower house, the Chamber of Deputies, debates a bill to allow abortion on demand in the first 14 weeks of pregnancy.

The bill will also permit abortion “until the ninth month in three situations,” Crux reported: “When the pregnancy is product of rape (abortion under those circumstances is already legal in Argentina); when the life of the mother is at risk either physically (which is already decriminalized) or psychologically; and in cases of genetic malformation of the child.”

Argentina amended its constitution in 1994 to protect the child in the womb from the moment of conception. However, abortion is “allowed when the life of the mother is at risk or if the pregnancy is the result of an abuse,” according to Crux.

The Chamber of Deputies is reportedly divided on the issue, but if it clears the bill, it’s expected the Senate, where most members are opposed to abortion, will reject it, Crux reported.

President Mauricio Macri’s government greenlighted debate on the abortion bill and Macri, who claims to be personally pro-life, says he won’t veto the legislation if it passes.

But Macri’s position will cost him at the polls, according to Dr. Rafael Pineda, a gynecologist and former member of the Vatican’s Pontifical Academy for Life.

“It was a public failure for him to say that. He enraged many of those who voted for him, who will remember that in the national elections of 2019,” Pineda told Crux.

Nor did Macri run on a platform of legalizing abortion, Pineda said. “Hypocrisy continues in Argentine politics.”

Dr. Eduardo Moreno Vivot, a pediatric doctor from Buenos Aires who specializes in children with Down syndrome, condemned the proposed bill.

“The project speaks about abortion after 14 weeks for malformations, and it doesn’t define which ones,” Vivot told Crux. “The term would imply a genetic condition, such as Down syndrome, or physical malformation … The fact that this is included is discrimination, and we see it in other countries.”

Pressure is ramping up from media and interest groups to legalize abortion in Argentina. Thousands of women marched on March 8, International Women’s Day, in Buenos Aires, with many sporting a green bandana, the symbol of the pro-abortion movement.

However, by all accounts and evidence, that march was dwarfed by the throngs of pro-life advocates on the streets Sunday.

The Rally for Life “is the beginning of a path that has to find every Argentine together to defend the life of the women and of unborn children,” Ana Belen Marmora of Unidad Provida told the crowd in Buenos Aires.

“Today, in every rally that is taking place across the country, we’re uniting to tell our representatives who are going to debate this issue in Congress that abortion doesn’t resolve anything, that it’s a social failure and a setback in matters of rights,” she said.