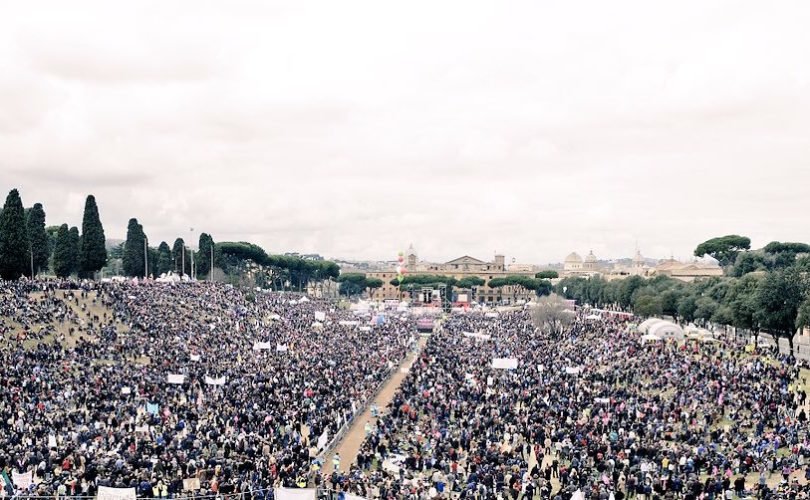 February 2, 2016 (LifeSiteNews) – As the Italian Parliament prepares to vote on “civil unions” for homosexuals, a crowd of hundreds of thousands of people rallied in Rome’s Circus Maximus and adjacent streets on January 30 to protest in favor of the family and the rights of children.

The gargantuan protest, dubbed “Family Day,” was organized by the Committee to Defend Our Children, and aimed to thwart an attempt by the ruling Democratic Party and its allies to grant legal recognition to homosexual unions and to allow homosexuals to adopt their “stepchildren” – that is, the children of their sex partners.

The protestors expressed their concern that such a measure would enable homosexuals to contract with egg donors and surrogates to “synthesize” children who will never know their mothers and who lack any right to a natural family.

“The uterus is not a furnace in which a manufactured product is made!” said Massimo Gandolfini, the main spokesman for the march, to the assembled crowd.

Calling the proposed law “destructive,” Gandolfini warned that if it were approved, “there will be an enormous confusion in which the family will no longer exist, but rather various models and confusions of the family, and the victims will be our children, because the law has the power to change the culture of a people.”

A vote on the bill is expected in early February.

Notably, the organizers avoided comments critical of homosexual behavior, as did the Catholic bishops who supported the march, led by Cardinal Angelo Bagnasco, Archbishop of Genoa and president of the nation’s episcopal conference. However, Bagnasco defended the traditional understanding of the family and the rights of children.

“The true good of the children must prevail over everything else,” said Bagnasco days before the march. “They are the weakest and most vulnerable. They are not a right at all, because they are not things that are produced.”

He cited a statement made by Pope Francis last year regarding the welfare of children, who have “a right to grow up with a father and a mother. The family is an anthropological fact, not an ideological one.”

Although the Catechism of the Catholic Church as well as the repeated statements of the Holy See denounce the immorality of homosexual acts, the Catholic hierarchy has been increasingly reticent about mentioning the Catholic Church’s doctrine in recent years, as social acceptance of homosexuality has grown. The call by then Cardinal Joseph Ratzinger, approved by Pope John Paul II in 2003, to governments to prevent the spread of homosexuality and to avoid granting special rights to homosexuals, has been left virtually unmentioned, although it has not been retracted.

In the days leading up to the march, Pope Francis seemed to back away from any support for it, calling off a meeting with Bagnasco after the cardinal began to defend the rally in January. However, in a meeting with cardinals several days later, the pope noted that “there can be no confusion between the family willed by God and any other type of union,” an act seen by many as an endorsement of the march.

A recent survey by IPR Marketing found that although almost 75 percent of Italians support “civil unions” for heterosexual couples, only a minority, 46 percent, supports the same for homosexual couples. A smaller percentage of 40 percent rejects civil unions for homosexuals, and 14 percent say they don’t know. A very clear majority opposes homosexual “marriage” – 55 percent versus only 38 percent who support it.

However, it is regarding the issue of homosexual adoption that Italians most vigorously oppose the gay lobby in Italy. A whopping 85 percent identify as being opposed to it, and only 15 percent in favor, with no one answering “I don’t know.”

Although organizers claimed a turnout of two million, Italy’s respected La Stampa newspaper argues that the attendance, while quite large, could not have been greater than 300,000, given the volume of space occupied by the demonstrators.