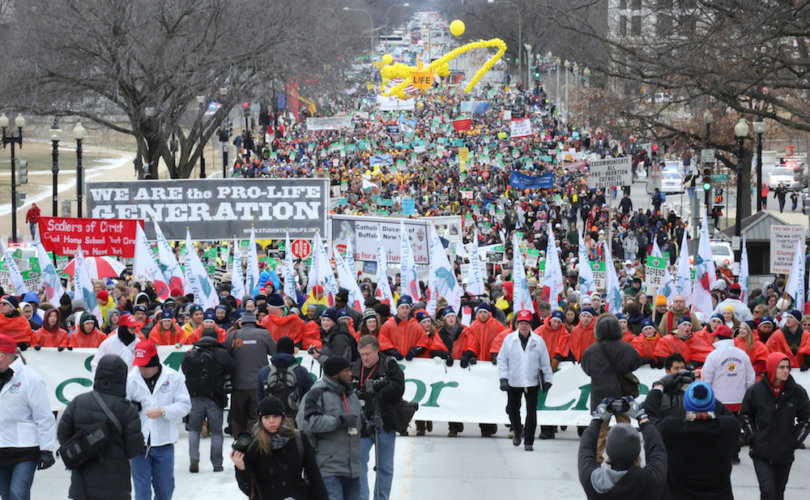 WASHINGTON, D.C., January 26, 2017 (LifeSiteNews) — Hundreds of thousands of jubilant pro-lifers are filling Washington’s streets for Friday’s March for Life, buoyed by the prospect of pro-life gains under the Trump administration.

Moreover, news broke Thursday that Vice President Mike Pence will speak at the March, the first time in the event’s history a vice president will speak. Kellyanne Conway, Trump's campaign manager and now Counselor to the President, is also scheduled to speak.

“With the Trump administration having done nothing but laudable things on the pro-life front so far, there’s incredible enthusiasm and encouragement” in the runup to the March, says Eric Scheidler, executive director of the Pro-Life Action League.

“We’re on the verge of what could be some of our greatest pro-life victories of all times,” he told LifeSiteNews in a telephone interview from Washington.

Foremost of these would be defunding abortion giant Planned Parenthood, which is “one of the main things on the minds of pro-life marchers right now, and will be as we march tomorrow,” Scheidler said. “If we are able to defund Planned Parenthood, it’s hard to see it could keep existing as an organization.”

“Right before I came over I was on the phone with NPR, before that NBC Nightly News, before that the New York Times,” she told EWTN Wednesday.

“So outlets that sometimes report on the march that aren’t typically that friendly towards the march have been calling and we’ve been having in-depth conversations. It's been a great opportunity.”

Mancini told LifeSiteNews today that the Trump administration has “mentioned the March for Life in press briefings and in interviews all week long. We have never seen anything like this in our entire life.”

“The mood is upbeat, the mood is exciting,” Jim Sedlak, executive director of American Life League, told LifeSiteNews in a telephone interview from Washington. “This is the first time in over eight years that we come here with some optimism because we now have a pro-life president.”

The “importance of the March for Life takes on a new meaning as Congress considers all of the various measures to defund Planned Parenthood and to curb abortion,” he added.

“People are very, very optimistic. They want change. They want abortion done away with. They are going to be putting a lot of pressure on their members of Congress to stop abortion, all abortion, without exceptions.”

And to have Vice President Pence speak at the March is “a major endorsement of the pro-life cause by the Trump administration,” noted Sedlak. “That has never happened.”

While Presidents Ronald Reagan and George W. Bush have called in a message to the marchers, “we’ve never had a president or vice-president appear physically at the March.”

“So far, things are looking like a 180-degree turn from the Obama administration’s radical pro-abortion policies,” he noted in an email.

Trump “has gone from a man who supported Planned Parenthood and pro-abortion Democrats to one who now brings up the March for Life in other contexts, and challenges the media for its lack of coverage of the largest and most positive pro-woman annual march in the nation’s capital,” Phelan added.

“I think some who were skeptical of Mr. Trump’s conversion on pro-life issues are starting to see his administration deliver quickly on some of their promises.”

But Phelan no doubt spoke for many when he also sounded a cautionary note. That the Trump administration is “so supportive of the March for Life is important, but it’s really just a beginning,” he said.

“I still think it will take some time for most people to understand how essential abortion was to a whole range of policy issues, including the overwhelming majority of foreign aid and spending.”

Added Phelan: “It will take time to root all of the pro-abortion ideology out of these policies and agencies, but that is where the battle is now.”

“If the Trump administration understands this and can keep the momentum going, I think they will win many who are still skeptical.”

Kristi Hamrick of Americans United for Life pointed out the apolitical aspect of the March for Life, noting that “the March goes on” irrespective of who’s in the White House.

“The support of President Trump and his administration for the March is a refreshing change from recent years and a sign that there is even more reason to hope that more women will be helped and more infants saved,” she told LifeSiteNews in an email.

But what “makes the March for Life most significant is its enduring example of abiding love that it sets for the nation and the sometimes obstinate political leadership of our country,” Hamrick said, which reminds “all that the heartfelt support and non-negotiable commitment that pro-life advocates have for women and their unborn children will not go away.”

Pro-Life Action League’s Scheidler said Trump will not fail to see the difference between tomorrow’s March for Life and last Saturday’s pro-abortion Women’s March on Washington.

“That march was really about two things. It was about denouncing Donald Trump and it was about promoting Planned Parenthood and abortion,” Scheidler told LifeSiteNews.

And while the Women’s March drew record crowds, “so much of their message was vulgar, it was offensive, it was self-absorbed, it was so out of touch with the real problems that women face,” he added.

“If Donald Trump looks at the kind of people, the quality of people, the tone of the people who are out here for the March for Life, he will see a stark difference,” added Scheidler. “He will see that this is where America really lives.”

The March for Life Rally begins at 11:45am ET on January 27 on the grounds of the National Mall. The March for Life starts around 1:00pm ET, directly after the Rally concludes, and will end in front of the U.S. Supreme Court.