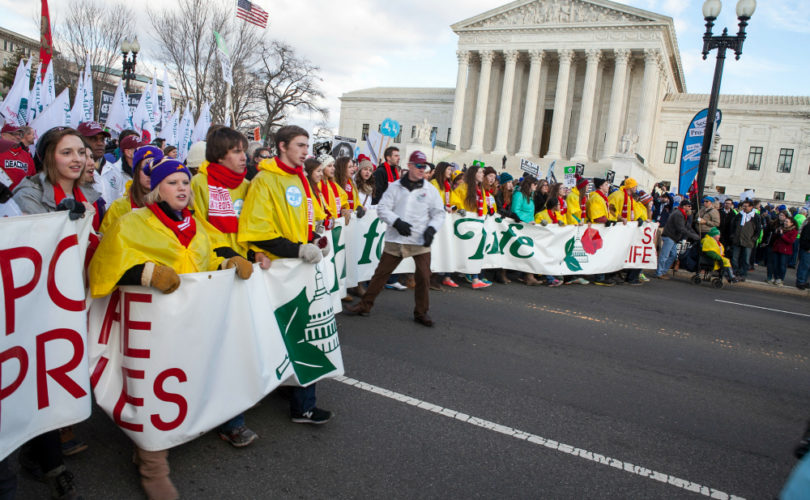 WASHINGTON, D.C., January 24, 2020 (LifeSiteNews) — Pro-life activists from countless backgrounds across the United States marched the streets of Washington, D.C. today for the annual March for Life, where President Donald Trump became the first U.S. president to attend and speak at the event.

Wednesday was the 47th anniversary of the Roe v. Wade Supreme Court decision, which, along with its sister case Doe v. Bolton, imposed abortion on demand across the nation in 1973. At least 60 million preborn children have been slaughtered over the last 47 years. The theme of this year’s march is “Life Empowers: Pro-Life is Pro-Woman.”

Trump will the first US President to attend the March For Life!

My American friends see this as historical just for America,but from my international perspective this will be the first world leader to ever march for the unborn

Jeanne Mancini, President, March for Life: “We have never had a President of the United States actually come in person to the March for Life.” But now you do! See you later Jeanne. @HeatherChilders @FoxNews

“We’ve come a long way from ‘safe, legal, and rare’ to ‘shout your abortion,’” March for Life president Jeanne Mancini said. “We know this message about women and abortion is both deceptive and hurtful.”

The 2020 March for Life is the pinnacle of a week of activism in the nation’s capital.

On Tuesday evening, Trump declared this year’s anniversary of Roe v. Wade to be “Sanctity of Life Day.” The contenders for the 2020 Democrat presidential nomination, meanwhile, marked the occasion by promising to appoint pro-abortion judges and force American taxpayers to fund unrestricted abortion.

The days leading up to the march were packed with pro-life events and announcements.

On Wednesday, pro-life activists were arrested during a sit-in at U.S. House speaker Nancy Pelosi (R-Calif.)’s office, where they were protesting her refusal to allow a vote on anti-infanticide legislation. That day, the U.S. Department of Health and Human Services (HHS) Centers for Medicare and Medicaid Services (CMS) also granted the state of Texas a Medicaid waiver to fund the Healthy Texas Women program, which does not include abortion businesses like Planned Parenthood. This reversed the Obama administration’s decision to deny a similar waiver to the state in 2013.

On Thursday, priests and pro-life activists protested at Washington, D.C.’s massive Planned Parenthood facility next to an elementary school in the city’s northeast quadrant. The March for Life conference also took place Thursday, as did the annual Vigil Mass for Life at the Basilica of the National Shrine of the Immaculate Conception.

SBA List, which is spending over $52 million to re-elect Trump and pro-life senators, released a new ad contrasting the abortion extremism of the Democrat party with the record of “the most pro-life president in history.” It was also announced that SBA List president Marjorie Dannenfelser will lead the “Pro-Life Voices for Trump” coalition.

On the eve of the March for Life, 18 U.S. senators and 41 representatives released a letter to Secretary of State Mike Pompeo asking him to address a loophole in the Mexico City Policy (now called Protecting Life in Global Health Assistance), which bans global health assistance dollars to foreign nongovernmental organizations (NGOs) that commit or promote abortions. Currently, the only pro-abortion NGOs banned from receiving foreign aid are international ones. NGOs that are incorporated in the U.S. may commit and promote abortions abroad.

Another notable presence in Washington, D.C. during this March for Life is His Eminence Cardinal Raymond Burke, who this morning will offer a Pontifical Low Mass before the march and on Saturday will deliver the invocation at the National Pro-Life Summit (formerly the Students for Life of America conference). Burke, one of the foremost defenders of Catholic orthodoxy, condemned abortion killing in an appearance on Fox News Thursday evening.

LifeSiteNews is closely covering the March for Life.